Most homebrewers spend a lot of time and energy keeping their beers clean and clear from what I love to put in them. Wild saccharomyces, brettanomyces, pediococcus, and/or lactobacillus can turn great beer into absolute swill, but they can also turn the simplest of worts into some of the most complex and delicious beers out there.

The perfect example of this is a traditional lambic. It starts life out as raw wheat, pilsner malt, and old hops (or fresh but extremely low alpha acid hops like hallertauer). On its own, that wort wouldn't wow the most bland taste buds in the world, but give it time - and a myriad of eclectic microorganisms - and you'll get a beer that looks unassuming but tastes and smells otherworldly.

I hear what you're saying, and you’re in luck; I've never done a decoction mash either, and I breezed through the turbid mash process with no problem. All I did was make sure that I had a solid flow chart with easy to follow steps that I went over a few times in my head before beginning the day.

So what exactly is a turbid mash? It's a mashing technique used to extract both long, complex carbohydrates - for the Brett and bacteria to munch on slowly for months and months - while simultaneously giving you short, easily converted sugars for the saccharomyces to binge on in the opening weeks of fermentation. A detailed flow chart/explanation can be found at the end of this article, but you basically just use boiling water to heat up your grains/mash, pull off and heat up different runnings, add more water, then pool everything at the end and boil.

You've got the grain and hops taken care of, you understand the basics of a turbid mash, but there's one more key ingredient that's required here...your menagerie of yeast and bacteria. You could always use pre-packaged blends and mixes for your lambic, but what fun is that?

I've been using the same basic 'house blend' souring culture for my last 3 sours (a stout, Flanders red, and the lambic I'm writing about now). It started out as a wild sourdough starter that I tried with a few beers (a sour cherry porter that is still one of my favorite beers I’ve made, some very boring saisons that I never aged out to see where they'd go, and my first go at a Flanders red). With the Flanders, it never got much of a sour kick to it, but there was some decent funk to it, so I added some bottle dregs from Russian River's Sanctification and Consecration (along with some Lost Abbey Red Poppy) and waited a few more months to discover a very lovely beer with a light/bright acidity, no acetic character, and an underlying funk that balanced everything out quite well. The same day I kegged that beer (for further aging), I made a stout to sour and pitched one cup of the sour slurry along with a packet of US-05 into the wort and let it do its thing. After two months in primary, I transferred to a keg to age on oak cubes and again used a cup of slurry and a packet of US-05 in my next sour (Flanders red v2.0).

I must have done something right with the sour stout because after only five months from grain to glass, it took 2nd place in the specialty beer category in a fairly big homebrew competition in San Diego. Flanders red v2.0 was also kegged after two months in primary to free up the sour culture for the lambic. I again used one cup of my sour slurry from the Flanders, only this time instead of using US-05 for yeast I went more traditional and used a Belgian yeast strain. I chose WLP565 Belgian Saison I Yeast (the Dupont strain) specifically because of its reputation as being a slow/poor attenuator, and also being famous for getting stuck after a few weeks of fermentation. Since I ferment low to start (63F-64F normally) and only go up to 68F-70F when finishing beers, I figured a stalled fermentation would leave even more sugars and carbohydrates for the brett and bacteria to chew on. The Belgian yeast would also produce more phenols and esters (even at a low temp) for the brett to be able to play with to give even more character to the lambic. I also added 1.25 ounces of medium toasted Hungarian oak cubes that I had boiled for five minutes before adding to the wort at the start of primary fermentation. While this isn't a lot of oak, since it'll be aging for a long time, you don't need a lot to eventually get those flavors teased out of the wood and into your beer.

I tasted the wort after three weeks in primary, and I was kind of surprised how much Belgian yeast character came through after being held at 63F for a week before being brought up to 68F. There was obviously no real sour/funk to the beer, but I was just curious to know if the Belgian character would come through. It’s now been four months on the yeast cake, and the beer is almost crystal clear, quite pale in color, and the sour is becoming nice and assertive. It's not terribly complex yet, but those notes are coming. There is no hint of acetic acid at all, so I'm happy there. The standard Belgian ester/phenol notes from the beginning are all but gone, so the Brett has definitely been doing some work. There also isn't much funk or earthiness coming through yet, just a hint at the very tail end of the tasting.

All in all, I think the process worked well, it was a fun day using an old school process and as of right now it looks like it'll make a kick ass beer. Which, in the end, is what I'm looking for. 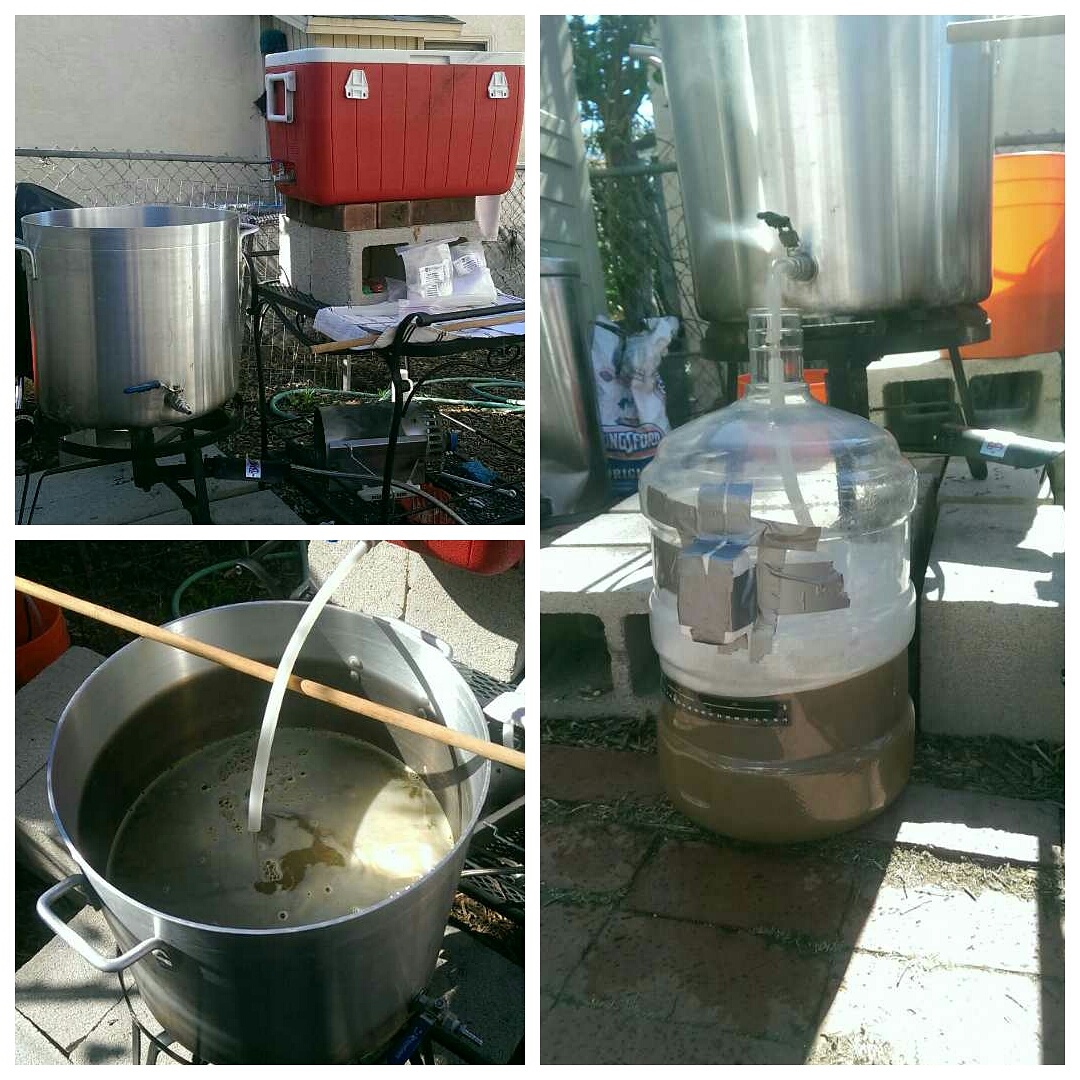 Full recipe:
5.5lbs of Pilsner malt
3.5lbs of raw wheat
Boil ~4 hours until 5.5 gallons remaining, Hallertauer hops added at start of boil to 15-20 total IBUs.
1 vial of WLP565 Belgian Saison Ale I
1 cup of sour slurry from previous sour
Ferment at 64F for a week, then raise to 70F, let age on yeast cake for at least six months or longer; can rack to secondary anytime after that to continue aging.

Sparging:
10. During the 20 minute rest, add 5 gallons of water to your still simmering water and raise temp to 190F.
11. Vorlauf (basically make sure the wort is grain free, it's going to be cloudy), and drain mashtun into your boil kettle.
12. I batch sparge, so I added all 6ish remaining gallons of 190F water to my mashtun and stir well.
13. Vorlauf again and drain into the kettle. 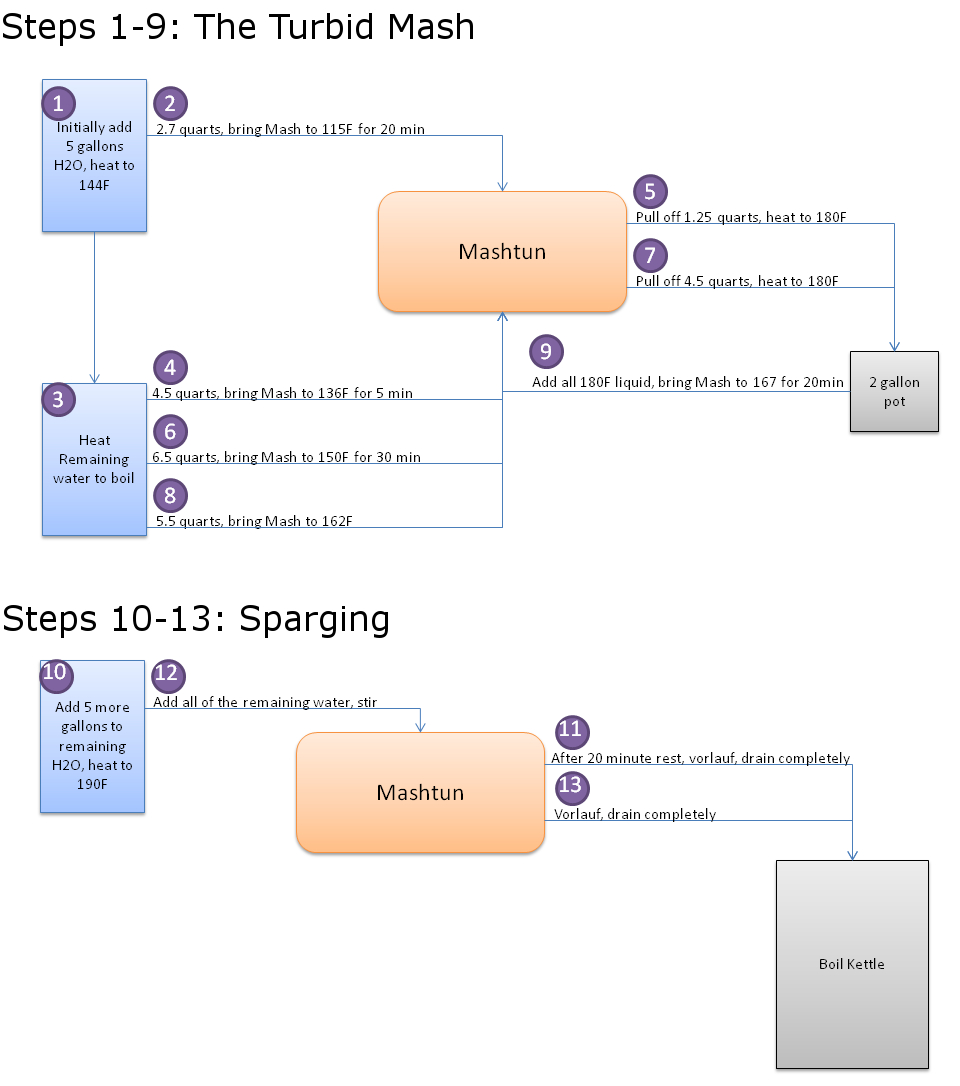 I am terrified of complicated processes...but a huge sucker for flowcharts. This was an awesome breakdown of a process I've been avoiding for months, thanks for writing this up!

Theoretical question: If you turbid mash but don't introduce anything (like Brett) that can chomp those long-chain sugars, would you essentially just have avery low attenuation and a very sweet end beer? I'm trying to see how a turbid mash would work with something *other* than a funky/sour beer

I don't think the starches that come out early in the mash that you're stabilizing would necessarily come across as sweet, more than likely it'd be more wheat-y/cereal-y on the palate. Strangely enough, I didn't taste the wort I pulled off in the early stages to see what it tasted like, kind of annoyed now that I didn't.

I want to say wits were also made using this process, so I don't think it'd be all that crazy for other styles.