A few weeks ago, I was contacted by Rex Slagel, owner of The Brew Bag. I had seen Rex on a Facebook brewing group or two, and knew that he had some sort of business involving brewing bags, but I'll be honest - "BIAB" has been a four letter word to me, so I had never really bothered to learn more about his venture.

You see, I've used a grain bag a few times in the past, and I had yet to have anything I would call a positive experience with one. Granted, my experiences were largely stovetop partial mash episodes, and I may have transferred negative emotions onto the poor bag from the messy splashing and poor temperature control I associate with the process. With that said, my plain Jane grain bag from Austin Homebrew has always been a pain to use - it's a nice, coarse mesh that makes cleanup a real chore (the grain bits seem impossible to fully clean out). I read tons of accounts of people who have great success with BIAB, but I love my three vessel setup with a cooler for a mash tun. Different strokes and all of that.

Back to Rex. You see, Rex had caught wind of the 2015 BrewUnited Challenge, and was interested in becoming a sponsor. In fact, he was interested in making The Brew Bag into one of our featured sponsors, as he donated six gift certificates worth a total of $240 to the competition. He explained to me that his company does not only make bags for the typical BIAB setup, but also to use as an enhancement to people with equipment just like mine. He sang the praises of no stuck sparge worries, of easier cleanup, of the ability to increase efficiency due to a finer crush - all possible due to his so-called "fabric filter".

Well, I could intellectually understand what he was saying, but I'll admit it - I still wasn't gung ho about exploring the idea for my own setup. I tend to be pretty frugal (read: cheap) with my brewing setup, and what I have seems to fall under the "if it ain't broke, don't fix it" wisdom. I just didn't see me dropping $40+ on an item that I wasn't sure I would even use.

I'll say this for Rex - he is a true believer in his product. So, we discussed the idea of me reviewing one of his bags; he took my cooler's measurements, made up a custom bag just for me, and shipped it my way.

Full disclosure: the following review is 100% true and accurate, and reflects my honest experience with The Brew Bag. However, I did *not* purchase my bag; it was sent to me, for free, with the understanding that I would write a fair, unbiased review of the product. Additionally,  I have mentioned the sponsor relationship that I have with The Brew Bag, due to our competition. Finally, I have since signed up as an affiliate for The Brew Bag; I do receive a commission for any purchases that readers might make who go from this site directly to The Brew Bag.


When I opened my Brew Bag, one of the first things that I noticed was the construction. The thing did seem sturdy and well made, and the mesh was significantly finer than my old cheapo grain bag. I had read that these bags supposedly cleaned up easily, but to tell the truth, I was a bit dubious. 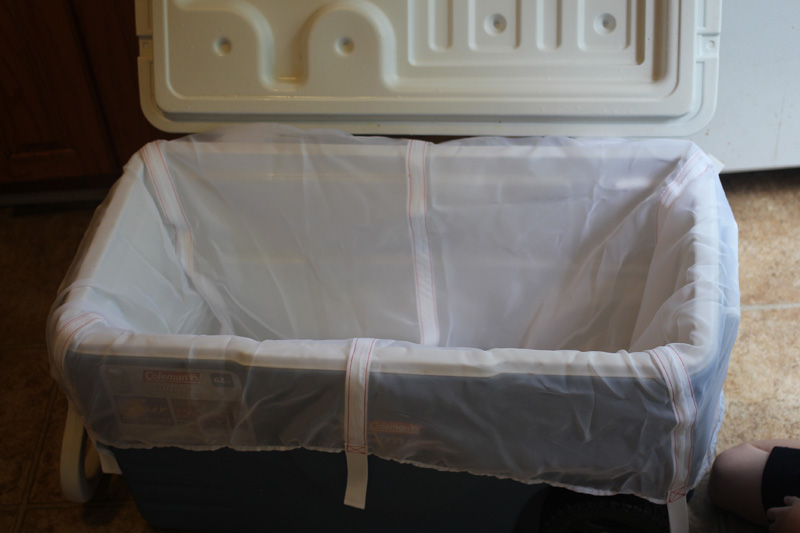 Brewday came, where I would be brewing my special commemorative beer for the birth of my daughter. I went ahead and unfolded my bag inside the cooler; once I got it fully spread out in the bottom, it overlapped the edges by a bit. Six sturdy loops were made into the bag - one at each corner, plus one on either side of the mid point of the bag. I worried for a moment that my cooler lid might not shut securely, but that worry was unfounded; I had no issue closing the lid with the bag in it. 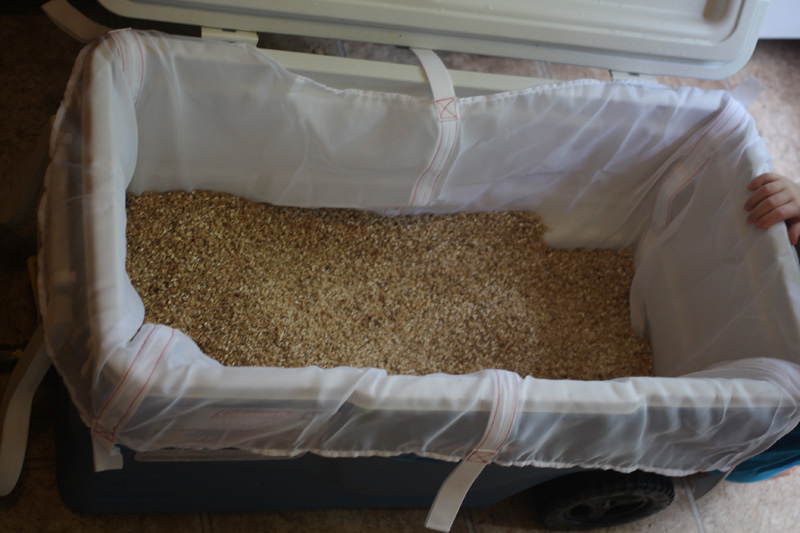 Grains in the bag. A tiny bit of slipping.

I was able to pour my grains in with minimal slipping, but pouring my strike water in did cause a little more shifting. When I started to stir, I discovered the biggest weakness of the bag; namely, it had a tendency to slip a bit while I stirred, forcing me to occasionally grab one of those loops and tug the bag back into place.  Still, the loops were long enough to make this process pretty easy. 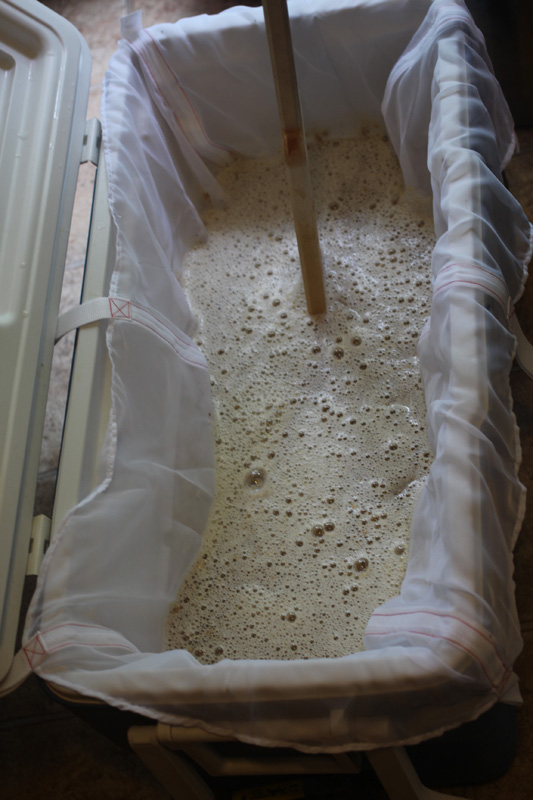 After a nice stir. So far, so good.

This beer was a double decoction mash, which meant I ended up doing a *ton* of stirring over the course of this brew. The shifting was an annoyance, though as I neared the end, I was chatting with my wife. At almost the same moment, we came up with a solution - why not wrap a bungee under the cooler, and hook it to opposing loops? This would keep the bag tightly in place, and totally prevent slipping.

So far, I was neutral on the usefulness of the Brewing Bag. But when it came time to lauter, the genius of the bag became apparent to me.

I've seldom had any real drainage or stuck sparge issues with my setup (stainless braid in the cooler); my issues are typically self inflicted... or caused by my kids "helping" to stir, and accidentally crushing my braid in the process. With the bag, though, I can see that any of those worries are pretty much a thing of the past. 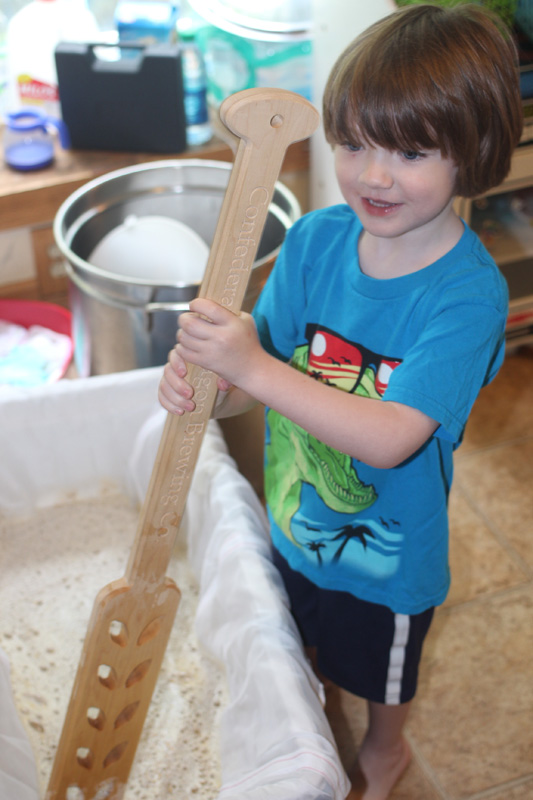 Silas, my four year old - my most helpful brewing buddy.

As my drainage slowed, I took my typical steps - elevate the opposite end of the cooler, coax the wort to settle around my valve, eventually get tired of waiting and just assume that some wort is not possible to collect.

This time, I was able to grab those loops, lift up, and voila! All of my remaining sweet wort dripped out, becoming easily available to drain.

After moving the bag back to its original configuration, I discovered that sparging was much the same story; stirring during the batch sparge was a tad annoying (I hadn't employed the bungees), but this was more than made up for with the ability to quickly, easily, and completely drain by simply picking up on the grain bag. I didn't have to pick it up and out, by the way - I just pulled it toward the back of my cooler, thus freeing up the area around the valve. 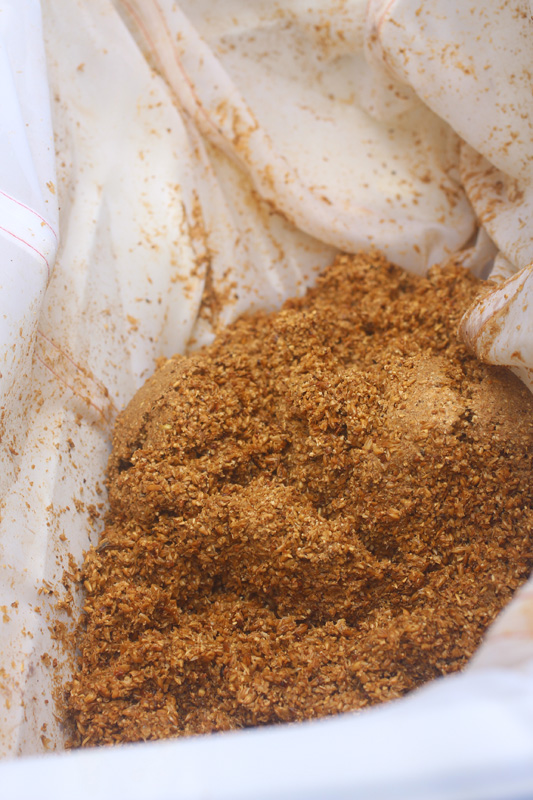 Baby, I got all of that wort!

As far as cleanup goes, this was - hands down - the easiest cleanup I've ever had. Lifting and dumping the spent grains was a cinch, and the bag means that no grain bits found their way inside my stainless braid, where they would lurk until the next brewday. The bag itself was very simple to rinse with my hose; a couple of minutes, and it was totally clean, with no stuck bits of husk like my old bag suffered from.

So, will I use the Brew Bag again? Absolutely. I feel like it improved my process. It made wort collection easier and more complete (I HATE leaving wort behind). It made cleanup easier. It removed the threat of stuck sparges, and opened the possibility of better efficiency through a finer crush, if I'm so interested.

The only issue that I had was the slippage of the bag, and I firmly believe that a couple of cheap bungees will fix that. In fact, I found out today that Rex is updating the official instructions to suggest use of bungees in exactly the fashion that I plan to employ.

Now that I have used a Brew Bag, I have come around to Rex's way of thinking. I'm not sure that there are many homebrewing setups that wouldn't benefit from adding one of these bags. And I would assume that if their various cooler bags work this well, the regular stovetop BIAB bags would be of similar quality.

Bottom line, I can freely recommend these bags to our readers. I can't imagine that you would be disappointed with the purchase.

The Brew Bag sells custom grains bags for both "brew in a bag" operations and for use as mash tun filters, such as I did above. They also sell gloves for handling bags full of hot grains, as well as hook and pulley setups for handling potentially heavy bags. If you are considering purchasing one of these bags, please consider going there through one of our links! Note that if you do go there from BrewUnited, you will receive 10% off of your entire order if you enter coupon code Brew United 10% Off!

I've been brewing like this for my past 6 or so brews, for the sole purpose of easier cleanup. However, for my most recent batch I decided to test the idea of a finer crush to improve efficiency. So, I went from (VERY roughly) a 0.035" crush to about 0.020". I had no issues whatsoever with a stuck sparge, cleanup was still a breeze, and my efficiency bumped from my usual, around 77%, to 84%. So happy with my purchase and never looking back.

Also. I've brewed about 6 times on a single bag using up to a 27lb grain bill (dry!) And the bag is still going strong, no tears or rips or anything.