So this is a continuation of the Odd Beer series I am doing, the first was the Orange Creamsicle Ale. While that one was a creation of my own, this is the first of the set that was suggested by users. The recipe was spawned off this recipe from /u/somethin_brewin but modified to my crazy ideas...


The adjunct change I made to the recommended recipe was to go with Golden Promise as I was only adding in five pounds of grain in an entire five gallon batch. I wanted the beer to have some indication of actual beer flavor. Treating it like a Session, the base malt was swapped out to try and get more out of each ingredient. The second change was the hop addition and schedule. I had planned to use Sorachi Ace in other beers so I wanted to try it out. The idea of the lemon in it would be a nice addition to the more citrus flavors too. My experience with the hop was little and I quickly was educated by my homebrew shop that I would get far too much Dill from the variety than Lemon in the flavor addition. So I quickly swapped and tried to see how a Citra and Amarillo flavor with an aroma of the Sorachi Ace would work out. 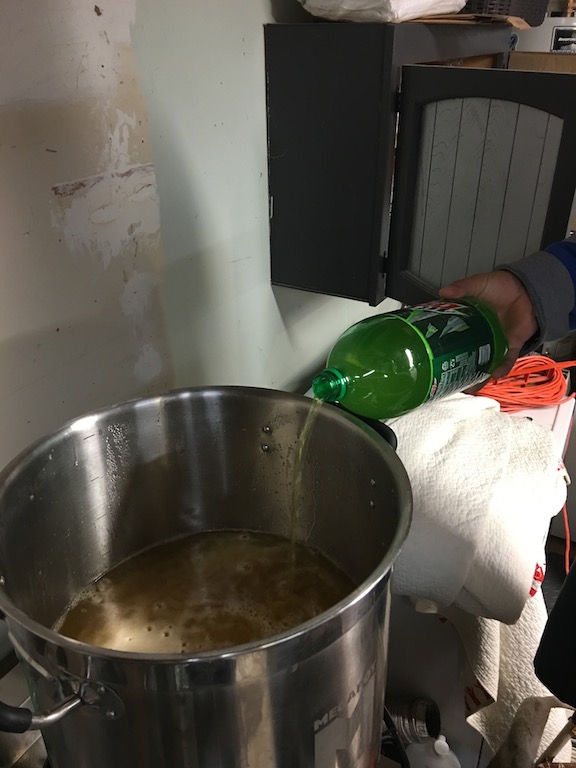 This felt so wrong yet so right...

Process wise was simple enough, a BIAB mash of two gallons of water with the grain at about 150F. Then off to the boil where copious amounts of Mountain Dew was added to fill out the rest of the sugars and fluid content. Which was followed by a normal hop schedule. I must say this was the weirdest smells I have experienced in a long while. The conflict of the hops and the boiling soda was throwing my senses through a loop. It wasn't bad...just weird. 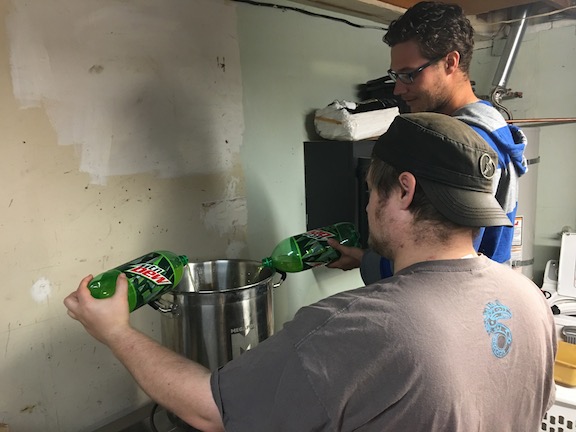 More hands on deck, there were 'only' 8 two liter bottles to add...you should have seen the store clerk.

The aroma I caught before in the brewing process seemed to continue after it was finished but in an unexpected way. The hop aroma lingered as that citrus, melon, lemon and even just the hint of spice from the dill made your tongue expect a strong flavored beer. Yet on tasting it came out quite mellow, clean and lightly fruity like a nice summer heat quencher. If anything the flavor seemed to be too muddled from my attempt to blend beer into dew. Instead the dew flavor was so subdued that even the five pounds of grain would hide it. Really I should have stuck with the two row to keep the beer out of the way of the fermented soda. But as I tasted it a new idea came to mind. The flavor profile reminded me of a nice mellow hoppy white ale. If...or rather when I try this again, I will use the same hop profile. Maybe dry hop a bit if I can get someone with a better nose to pick out the hops. Only change the grain profile to a 2lb two row, 3lb white wheat, 1lb c40 blend. Or if I am entirely too lazy I can just toss in 4lb wheat DME, 4gal mountain dew and 0.5lb of honey and call it a Honey Dew. Man these ideas are just getting crazier.

This is crazy. And awesome!