I'm competitive. I'm the guy who isn't satisfied unless something is difficult, the sick sort of person who enjoys video games like Dark Souls and books like Infinite Jest. Last year, I had the privilege of organizing a site for the Brew United competition, and due to some life changes I wasn't able to swing it this year. The competition deserves better, and while it was a tough decision to make, I decided I couldn't give the competition what it is due.
The silver lining is that this year I'm able to enter the BrewUnited Competition as a participant, and I rapidly discovered that my typical process for recipe formulation is definitely not conducive to this sort of challenge.

If you've seen my Building Behemoth blog posts over at To Brew a Beer, you;ll get a glimpse into my needlessly complicated and time consuming recipe formulation process.
That's right. That is not an isolated incident. I literally do it for every single beer that I brew.
I'm a data person, and looking at beers I enjoy/NHC winners and working backwards is how I approach my brewing. Unfortunately, due to the ingredient restrictions in the competition, that wasn't exactly working. Here's an example: 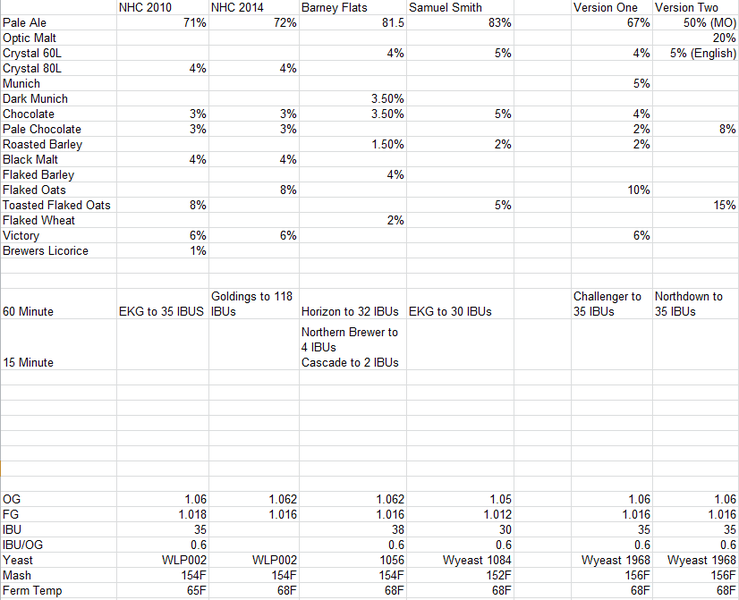 As a side note, I'd like to point out the 2014 NHC winner. IBUs seem crazy, and I even without any boil off it seems like a lot of hops for bittering with such a high alpha acid. If anyone has a correction I'd love to see it.
That's the document I used to originally plan my Oatmeal Stout. Version One is the recipe without any sort of alteration, and Version Two is the competition version. Pretty drastically different. Version One looks fantastic to me, I've saved the recipe in case I ever feel like making an Oatmeal Stout. Sadly, it doesn't fit the ingredient restrictions and has a total of 10 ingredients, 3 more than allowed in the competition and that isn't including the addition of another base malt that is required.
Cutting down was difficult. The obvious first choice was Pale Chocolate, three roast malts is a luxury I'm used to. Cutting Chocolate was next, but it was more difficult. I really enjoy Chocolate malt, but I don't use it without other roasted malts in the bill and I felt like the acrid, coffee character wouldn't score well on its own. So the job is left to Roasted Barley, which I couldn't remove.
Munich malt went next, followed by victory. I needed the biscuit, toasted cookie character that those malts contribute, which is when I decided to toast the flaked oats. This was inspired by the NHC 2010 and Samuel Smith recipes, and I followed the method outlined by Derek Springer over at Five Blades Brewing. There's also a link in Derek's post to a video done by Olan of Brew United, which is fantastic and you should watch it. 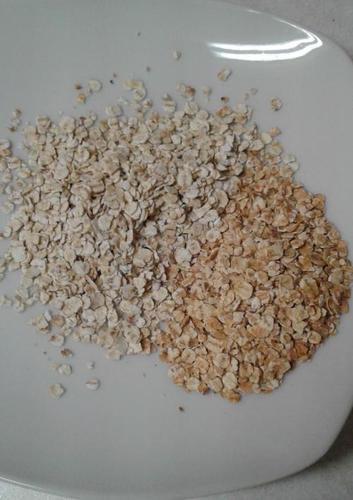 Untoasted oats on the left, toasted on the right.
Toasting oats supposedly lends an oatmeal cookie sort of character to beer, akin to nutty/biscuity notes. So I upped the amount of flaked oats in the recipe and labeled them toasted, hoping to replace the sacrifice of Munich and Victory.
So we are left with our seven after the introduction of Optic malt, which I choose for its contribution of biscuit character to the beer. Maris Otter, Optic, English Medium Crystal, Roasted Barley, Flaked Oats, sub in Northdown for Challenger per the rules, and WYeast 1968.
I also entered Festbier and American Lager, two styles I'm a big fan of, and thankfully the planning for those beers was way easier, especially the Roam the Neighborhood  American Lager. At most, I see five ingredients, including yeast and hops in that style. I've planned out an American Lager before, and the recipe I ended up with is surprisingly close to that recipe.
I like to think my issue with the Oatmeal Stout recipe is sort of the heart of this competition, a problem that is entirely self invented and required some creative thinking to get out off. Full disclosure, I love the oatmeal stout. I think it's delicious, and I'm pretty optimistic about my chances. But even if the judges hate it, enjoying the beer reminds me that beer is a bit more forgiving than I give it credit for. I lament over 3% Carahell or 4%, IBU/OG ratios. A consequence of "seeing" data, without tasting the products side by side. Numbers look fancy and significant, but taste is subjective.
Brewing for the competition has brought me back to "brew beer you enjoy" in a way I didn't think it would. If you haven't entered yet, I highly recommend it. It's a lot of fun to force yourself to think outside of the box, and you might really enjoy the product you end up with!