When signing up for the BrewUnited Challenge, in a brief moment of ambition I decided to rise to the challenge and attempt a brown porter from light grains, because... why not? Of course, I was soon kicking myself for picking a category requiring home-roasting malts, in which I had exactly zero experience. I'd surely be at a disadvantage up against more experienced roasters. I had plenty of time to put together my recipe though, so I planned for a little trial and error.

For simplicity's sake, I opted to roast Pilsner malt for most of my dark grains. After reading up a little to get the general idea, I ended up roasting five different types: pan-roasted to two different intensities, and oven roasted three different ways - about a half pound of each. In addition to the roasted pilsners, I also took a little bit of c60, briefly moistened, and oven toasted until it slightly darkened in appearance. I let them sit in paper bags for a couple weeks to waft away unwanted aromas, and tasted each of the grains to try to get an idea of flavors. This wasn't nearly as enlightening as I'd hoped. I happened to have an evening to kill, so rather than guessing my way to a recipe with unfamiliar grains, I decided on a better test: an array of mini mashes to explore their wort flavors directly.

Along with my six home-roasts, five commercial roasted grains were selected for comparison: Pale Chocolate, Chocolate, Roasted Barley, Crystal 140L, and Brown Malt. Twelve individual containers were prepared with 90g of Pilsner malt and 10g of each specialty (plus one 100% Pilsner as a control). Each 100g batch was combined and crushed individually, brushing off the rollers each time to prevent cross-contamination. As you can imagine, this was delightfully tedious. 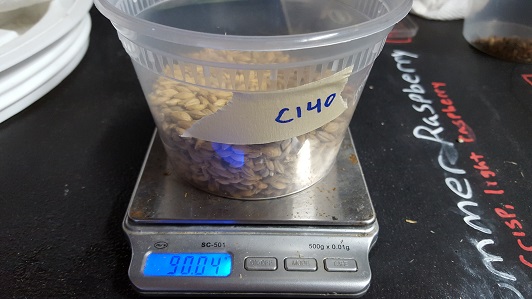 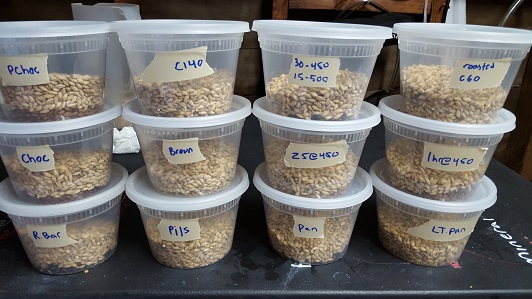 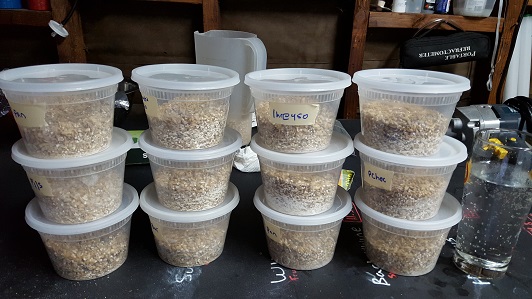 My mashing "chamber" was then prepared by recirculating about an inch and a half of temp-controlled water through my mash tun out the front valve, through the RIMS tube and back into the backside of the tun. 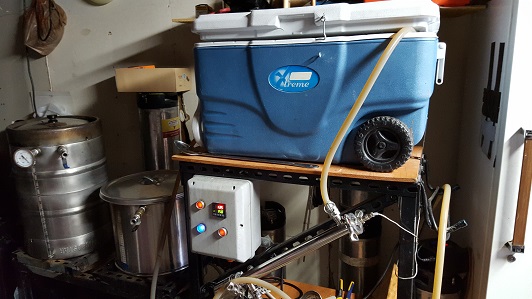 A gallon of strike water was built from RO to match the desired profile for my porter, and 1.25 cups was added to each mini mash (about a 1.4qt/lb ratio), targeting a mash temp of 150 F. 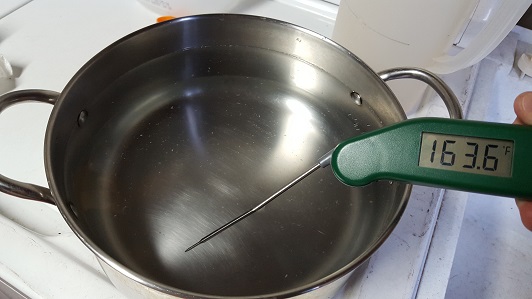 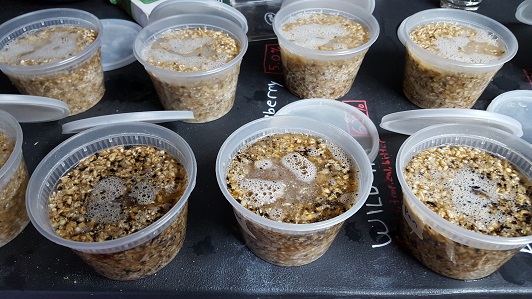 These were quickly stirred and closed up, then stacked into the mash tun and left for an hour. My mash-in ended up being a couple degrees on the low side, so I bumped the RIMS temp up a couple degrees and let it ride. This contraption ended up working quite well, and all of my mini mashes were on point by hour's end. 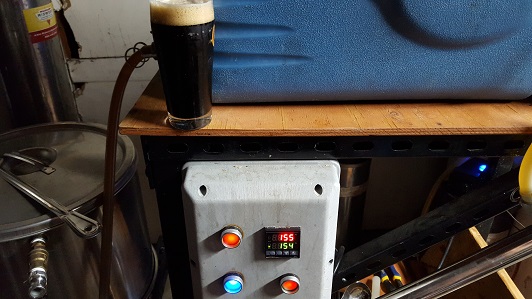 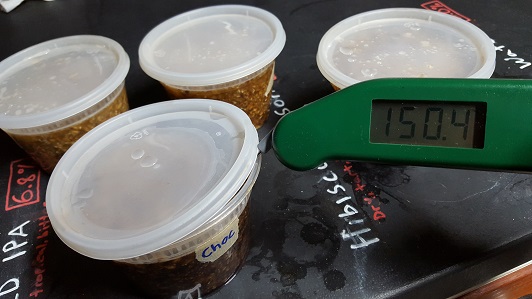 To lauter, the cups were poured through a kitchen sieve, and then again carefully through the mound of spent grain, leaving a reasonably clear wort. At this point I had about a cup of twelve distinct worts for sampling. After they cooled a bit I took some notes on color, aroma, and flavor, comparing my roasts against their approximate commercial counterparts. 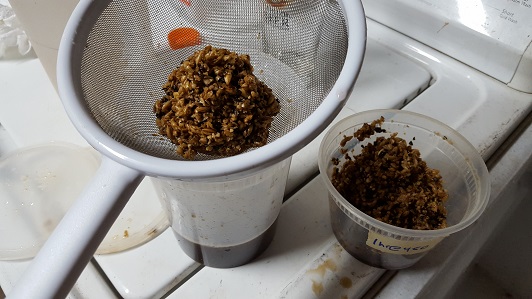 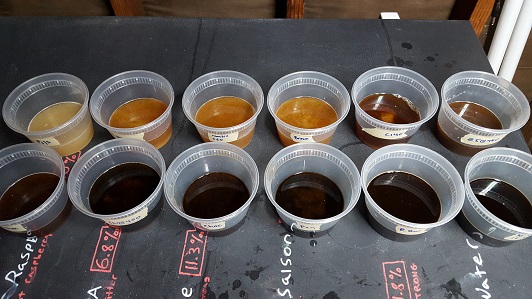 I was quite surprised by the variety of flavors from different roasts of the same base grain. Milk chocolate, dark chocolate, coffee, toast, toffee, burnt sugar, smooth roast, acrid roast, and burnt popcorn to name a few. Although there were some similarities to commercial roasted malts, none were an exact match. At this point I was very glad I took the time to explore the different roasts. A couple jumped out as quite tasty and a couple rather unpleasant - big differences which I wasn't able to identify from dry grain alone.

Once I had a good idea of the home-roasts I preferred, I did some quick blending to come up with a ratio of roasts I liked (using a graduated cylinder for accurate volumes). By diluting down with a little of the 100% Pilsner wort I was able to dial down the intensity to arrive at the total percentages of each roasted grain I wanted. From there it was a simple matter to construct the rest of my recipe: all that was left was to incorporate the c60, Munich and flaked Wheat, and come up with a hopping schedule. In the end, even though I did prefer the less rough-around-the-edges flavors of the commercial roasts, I was fairly happy with the flavors I was able to achieve with the homemade blend. Luckily the judges liked it too!

A nice bonus to this experiment was the opportunity to directly sample the flavors of other commercial roasted (and crystal) malts. Although I'd used them all frequently before, I'd never tasted them on their own. I wouldn't normally make a 90% Pilsner/10% roasted barley beer, for example, but this allowed me to directly explore the flavors each grain is contributing to my dark beers. My notes on these will surely be invaluable for the next new dark beer recipe I put together.