It may have happened the first time you cracked open a bottle of your own beer and discovered that, in complete honestly, it really wasn't all that bad. Maybe it happened when you perfected a clone of a favorite commercial brew. Perhaps when you won that first (or fifth, or tenth) competition medal, you couldn't help but wonder. Maybe the idea arose from the praise of your buddies, or the guys from the local homebrewing club, or picky Jim from accounting. It may have occurred to you after you brewed for a company function, or even for someone's wedding, and got to revel in the satisfaction of knowing how much other people enjoyed your creations. If you brew halfway decent beer (and often, if you simply give away free beer of virtually any quality), chances are that someone will eventually suggest that you should consider brewing in a professional capacity. 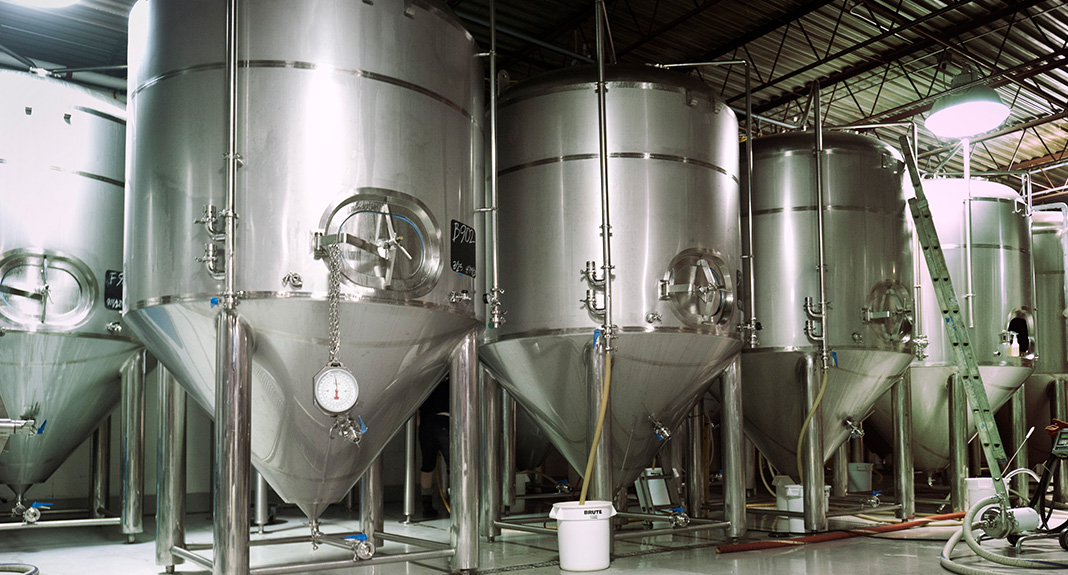 No matter where and when the inspiration came from, it's an idea that is nearly universal to homebrewers everywhere - that if you really were to focus on it, you could open your own brewery... and man, it would be amazing. Naturally, that amazing brewery needs a fantastic name - which might be meaningful in some personal way, or it might be clever, or it might be exceptionally punny (after all, many homebrewers have an unhealthy fascination with puns).

How many of us have custom glassware, mash paddles, signs, tee shirts, or other merchandise proudly emblazoned with the name of our fictional brewery upon it? How many of us include the name of our pretend brewery on bottle labels and such (at least for the bottles that we give away)? I personally own a half dozen pint glasses, one stainless steel growler, and one custom wooden mash paddle (which was a replacement for another custom mash paddle that I ruined) - all of which bear the name of my "brewery"; this sort of vanity item is too easy for my wife to pass over when gift buying times arise. Furthermore, I have an artist friend that designs labels for pretty much every beer that I really care to share with other people; I have promised her that if I ever do go pro, she has an actual job (read: one that pays more than a couple of bottles of beer) doing all of my design work. I know that I am far from alone in this sort of vanity.

Oh, sure. Some of you less romantic readers only let this subject cross your mind for a moment before quashing it - after all, you brew as a hobby, and you know that getting involved in it as a job could very well kill the fun. You might be utterly pragmatic, realizing that even a tiny nanobrewery requires shockingly large sums of money to open (seeing as how you have to actually have the facility built before you can even apply for a license) - and that the odds of turning a decent profit are fairly low. Maybe you've done a tiny bit of homework, and you've learned that being a brewer is far less about barley-based wizardry and exciting experimentation than it is about cleaning, cleaning, tons of physical labor, long hours, paperwork, repetition... and more cleaning. Maybe you've figured out that, in order to keep your doors open, odds are that you would end up having the market dictate your brewing lineup to you, as opposed to the other way around - after all, it doesn't matter how fantastic your kumquat lambic might be, the general public will likely by and large skip it in favor of generic IPA #27 from BoringBrewery down the road.

Be that as it may, the fantasy of running your own brewery is an alluring daydream, if nothing else. Me? I love the idea that, provided I was financially independent through other business successes, I could open a small brewery dedicated only to crafting the beers that I cared to brew - not necessarily what the market told me to brew. This dream goes even further, and includes a family component with it; one or more of my children would come to work with me, and while it would be hard, honest work, it would also be a labor of love... and one day, I would pass the brewery down to them.

Hey, if I'm going to dream the impossible American dream, I may as well dream big, right?

Of course, the central subject of any discussion on your imaginary brewery has to revolve around the beers that one would produce at said brewery. We could discuss potential equipment or methods, I suppose, but most of us are envisioning bottles of our beers on our local store shelves or seeing our tap handles in local bars as opposed to musing over the day to day operation of equipment we probably only have a loose concept of in the first place.

For some reason I don't fully understand, I have found my own imaginary beer list bouncing around my head quite often in the past week or so, despite the fact that I have fully accepted that - barring a lottery win or other unexpected landfall - I will never brew in anything by a hobbyist capacity. Even so, I find myself turning recipes over in my head, imagining them on a tap list, that sort of thing. So in the grand tradition of sharing an earworm in the hope of getting it unstuck from your own brain, I will now share my imaginary brewery's beer list with you.

Please do note again that this list is predicated on the unrealistic idea that I have no need for my brewery to actually make money, that I can treat it like I would my hobby beers - in other words, that I can brew whatever I like. You'll note that I am missing two entries that are found in almost every taproom across the country - I lack both a kolsch and a wheat beer, as I simply don't care a ton for either style. Also, before you go any further, I do have one request for after you are done reading - share your own lists! I personally think that it's a lot of fun to see the popular trends - and the odd outliers - in people's brewery lists. 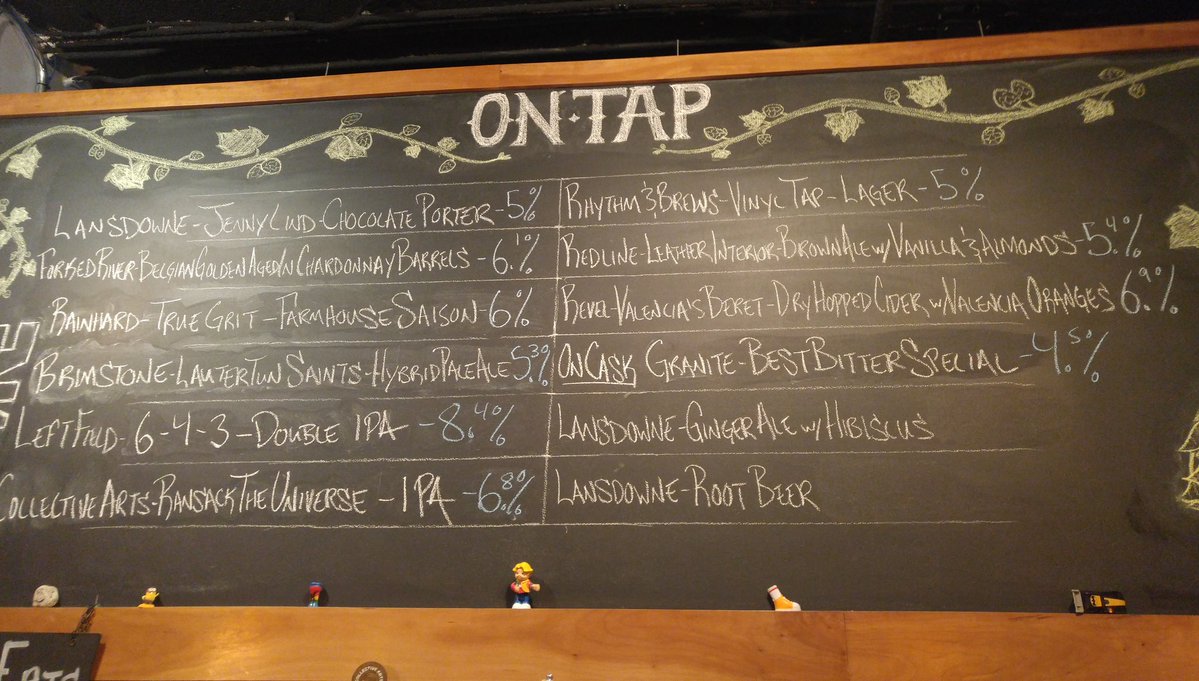 What would go on your tap list?
Photo courtesy of Brimstone Brewing

To start with, let's go ahead and list my year round offerings. There are the beers that would be the anchors of my brand, the ones that would always be available.

That gets me to the end of my year round list, though I'm conflicted about one or two omissions, which I will note below. However, I already have a large list - clearly, I'm playing in fantasy land as is.

Be that as it may, let's look at my seasonal offerings next.

That takes us to the end of my planned seasonal releases. Of course, if money is no object, there's nothing preventing me from turning whatever beer the muse is currently prodding me to brew into a special release, now is there?

Well, there you have it. If I hit the lottery one day, this is the sort of lineup that you can expect to find in my brewery... well, until I discover other beers that I like even better. Regardless, I'm hoping that writing about this will help finally get it out of my head again. Again, do be sure to share the tap lists of your own daydreams - I'm looking forward to reading them!

I personally tend to brew higher alcohol stuff for one simple reason - I like more intense flavors, and I seldom drink more than one (sometimes two) beers in a given day. As a result, it's not a big deal for me to toss in a little more base grain.

No such thing? That's like, your opinion, man. ;) It's homebrewing, the huge beauty is to be able to do whatever you like.

The market might agree with you, and my imaginary brewery might sell next to no 6% English brown. But since we're playing pretend, I think that it's okay.

Love, love, love your topic of choice. It's inspired me to focus on brews that are unique to me and question what I really want to drink day in and day out.
As an aside, I do understand why alcohol content is higher. The market dictates what people will pay for. No one is buying a drink south of 5% when they can get blitz for the same amount of money.

oh! and what is your imaginary brewery named?

Glad you enjoyed it, akozdra. It's definitely a lot of fun to ponder.

My "brewery" is named as a nod to my Southern heritage and the fact that I'm a huge nerd (I still run a roleplaying game website at age forty) - Confederate Dragon Brewing. If you click the link in the third paragraph (the one that mentions labels), you can see the name there, plus some of the label art.