I work for a restaurant group that has a small handful of restaurants, a cocktail bar, and a non-profit organization that educates elementary/high school kids on food. Every year we do a fundraiser in order to buy all the school supplies needed. This year Harpoon decided to make a beer specifically for us; and luckily for me, a sous chef and I got to help with the brewing.
The beer is a German lager. We didn't use their house yeast, instead they had been propagating up some German Helles yeast. We were aiming for a session beer, right around 4%. We wanted a very full body, and hit a mash temp of 160F. This was also a small batch, we ended up at 305 gallons; just a hair under the 10 barrel mark. 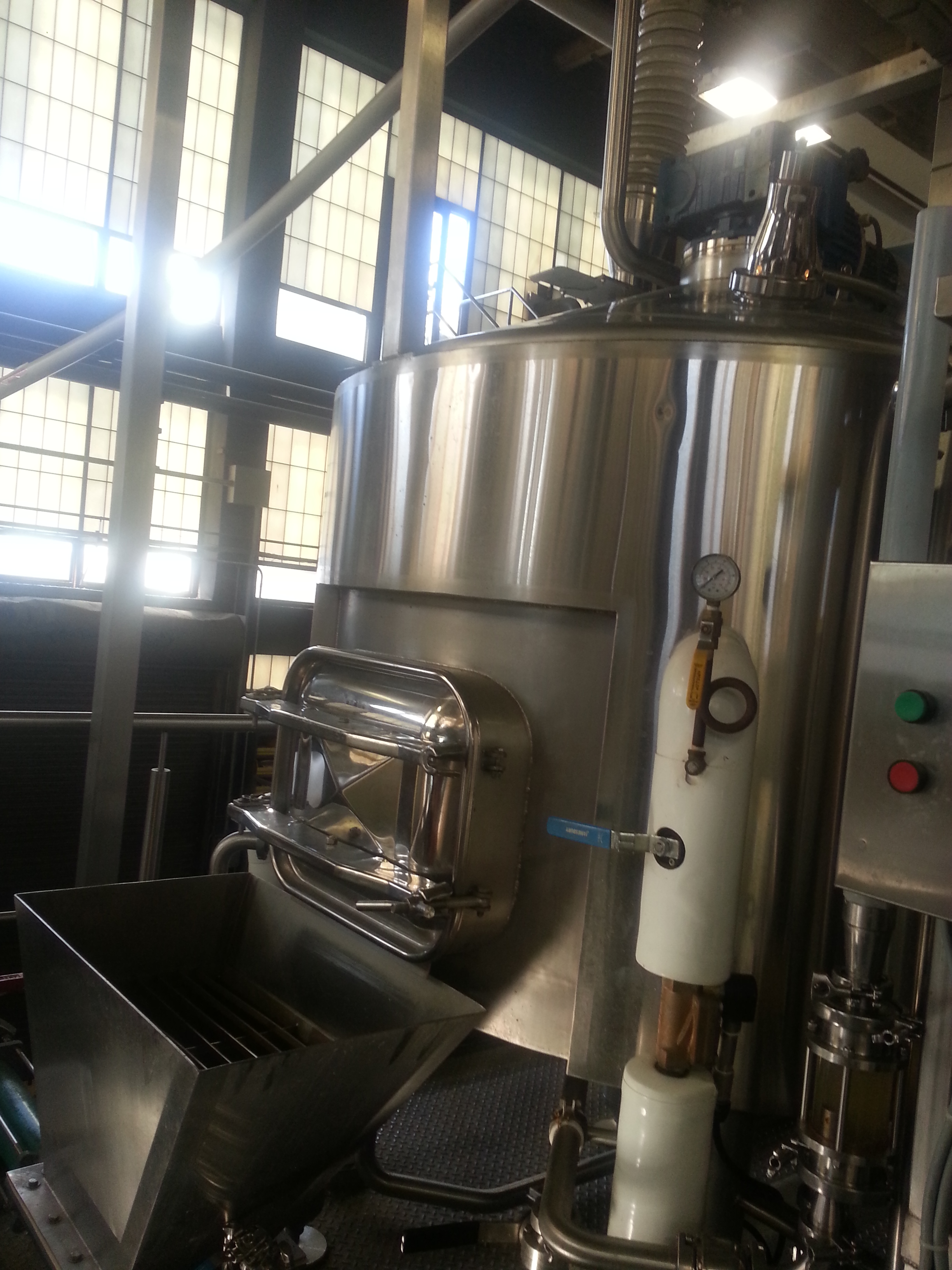 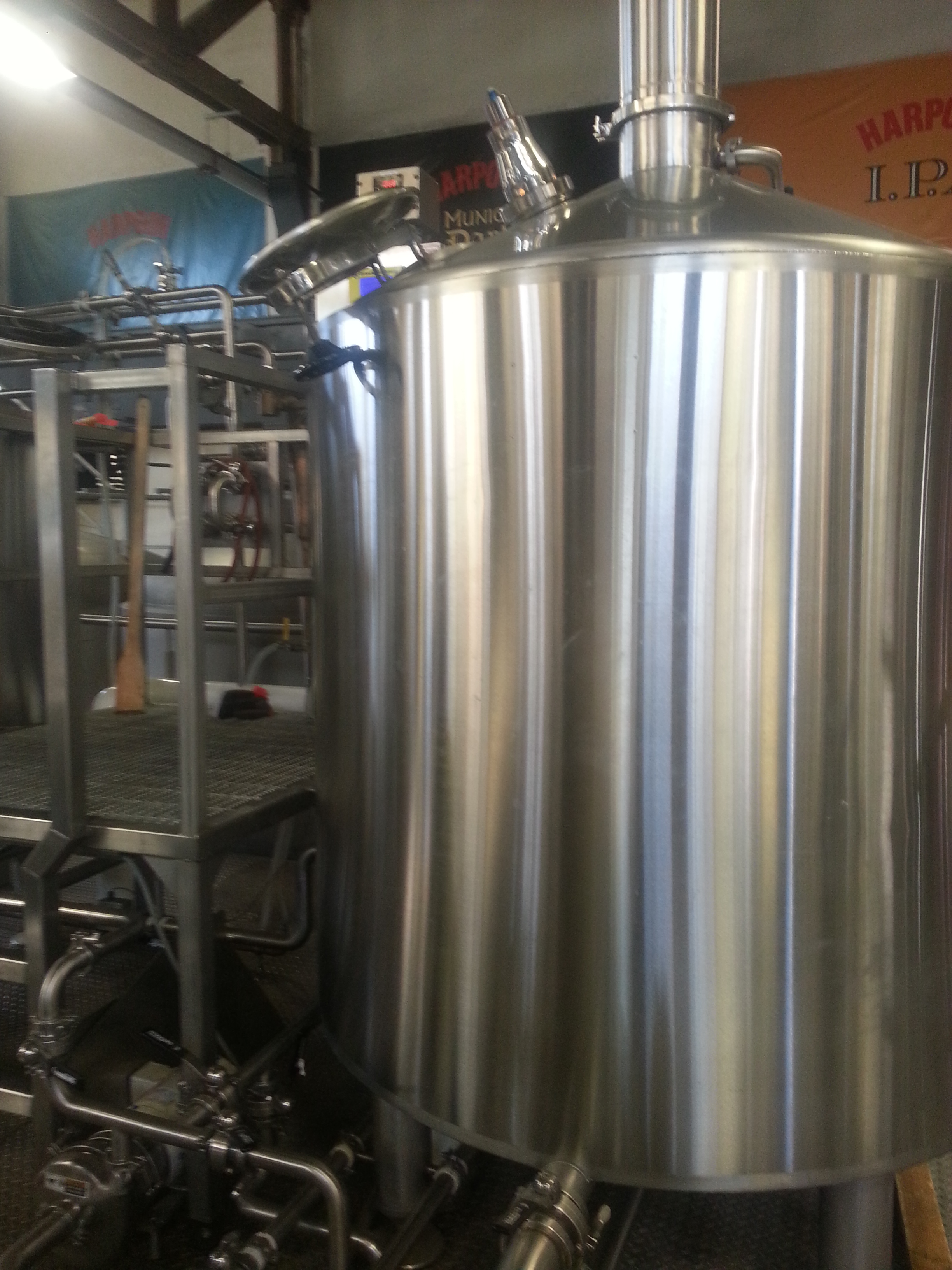 The boil kettle
The strike water had been heated to 182F starting the night before. By the time it got through all the piping and into the mash tun, it was at 178F. 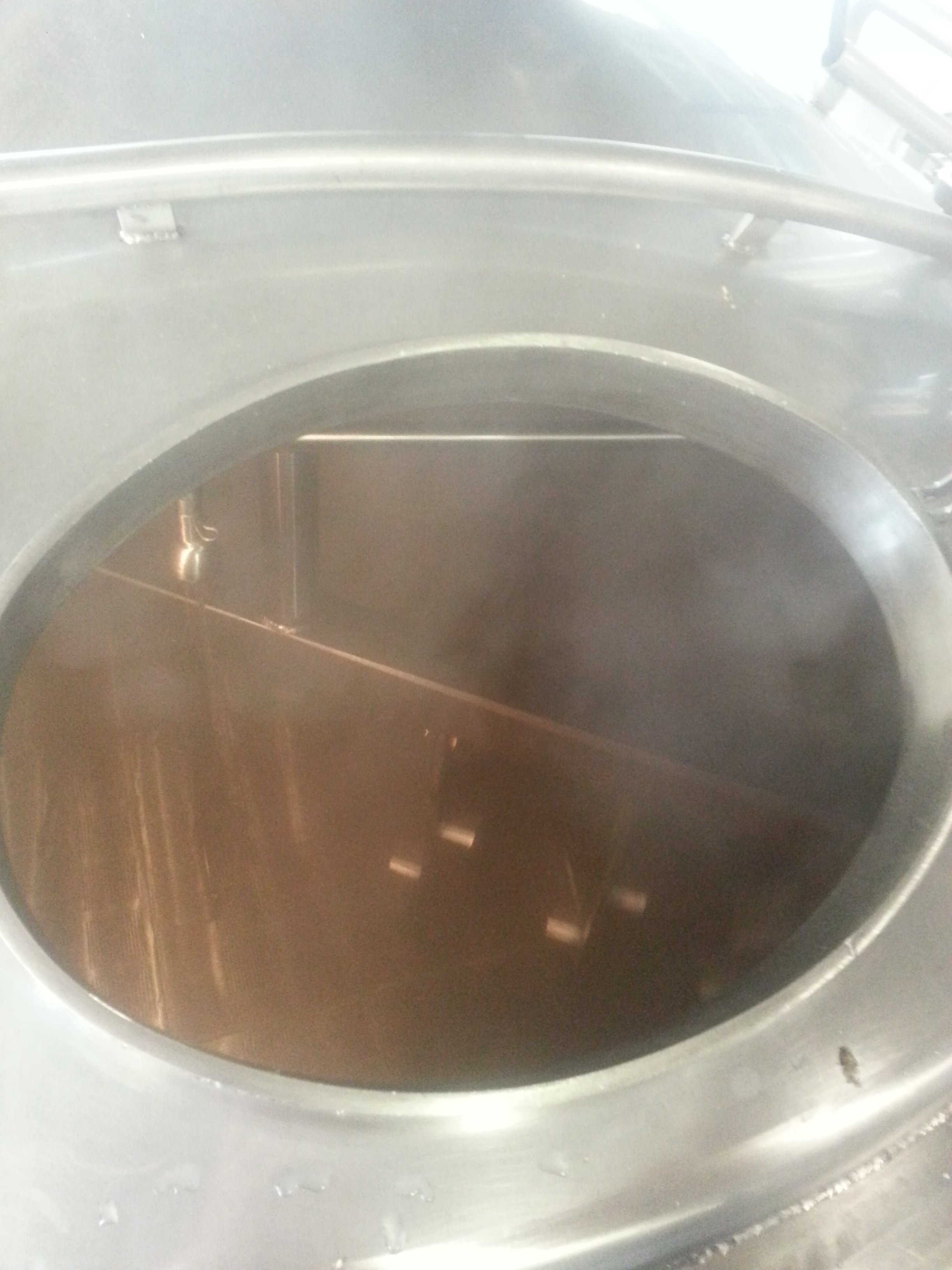 The mash tun filling with water
The grain, all 500lbs, was milled the night before and was being piped into the mash tun at the same time as the water. 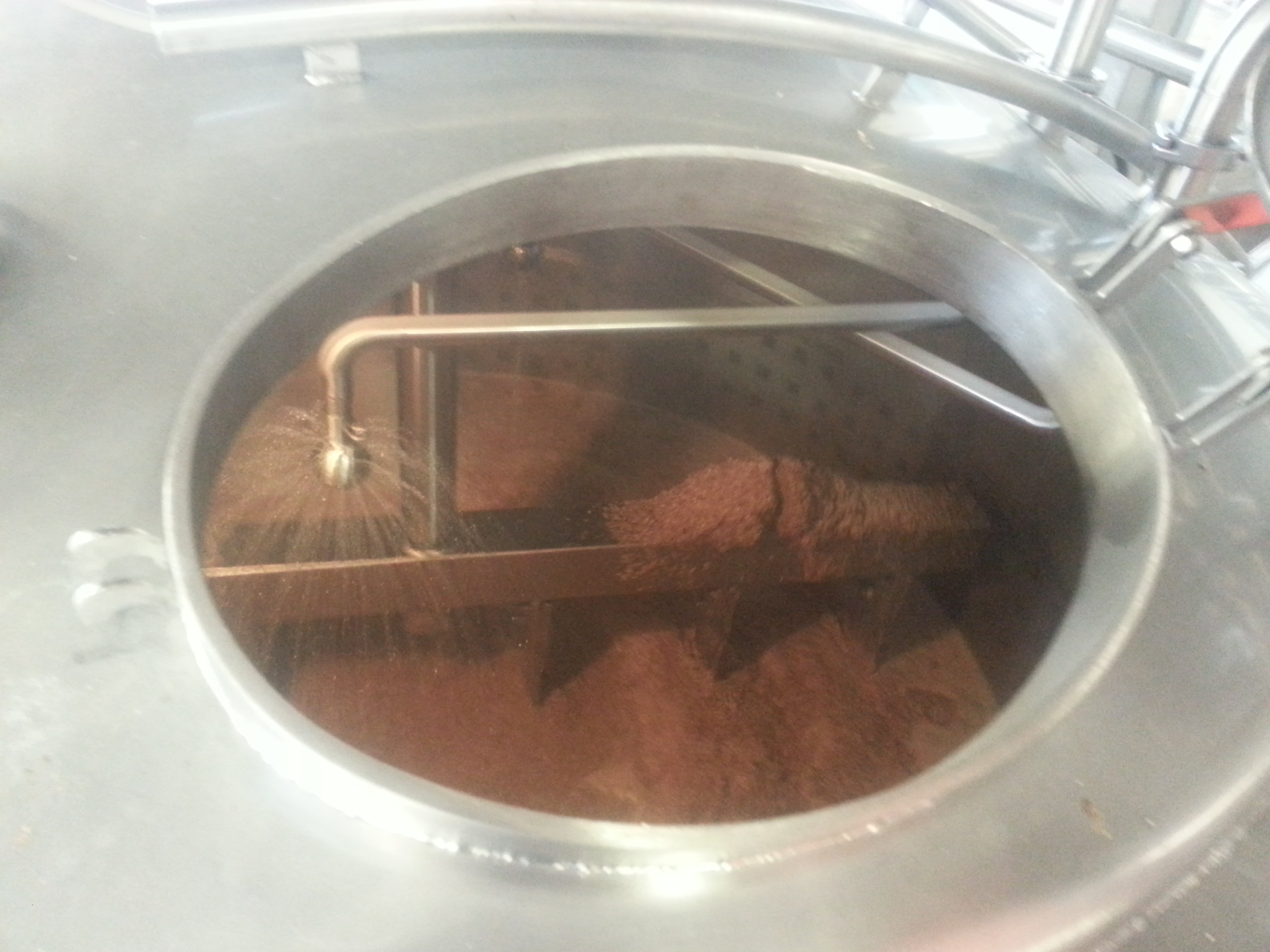 Grain coming into the mash tun
We stirred the mash around to homogenize the temp. 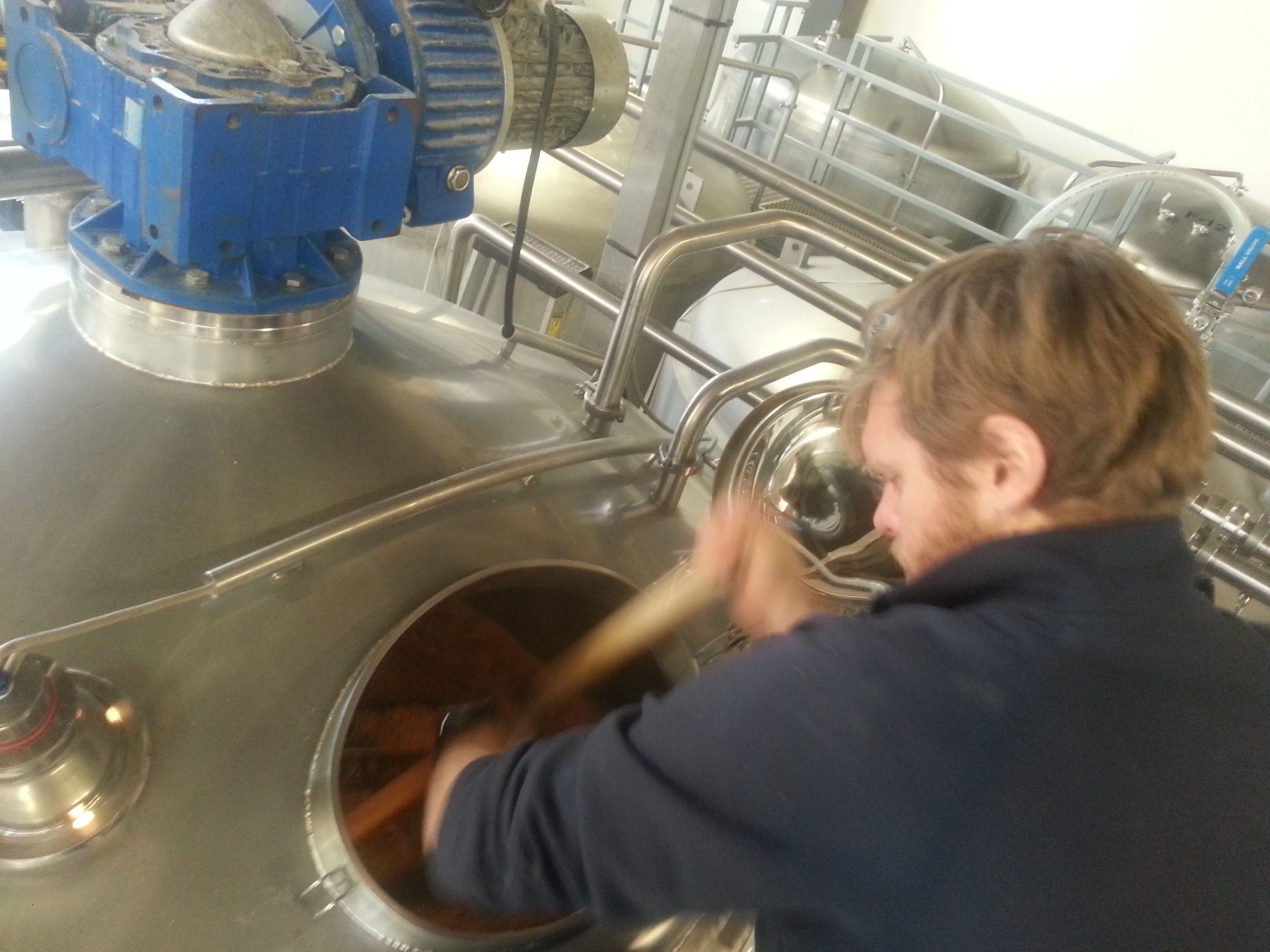 Nick, the head brewer, stirring the mash
After taking the calibration corrections into account, we nailed our 160F mash temp. 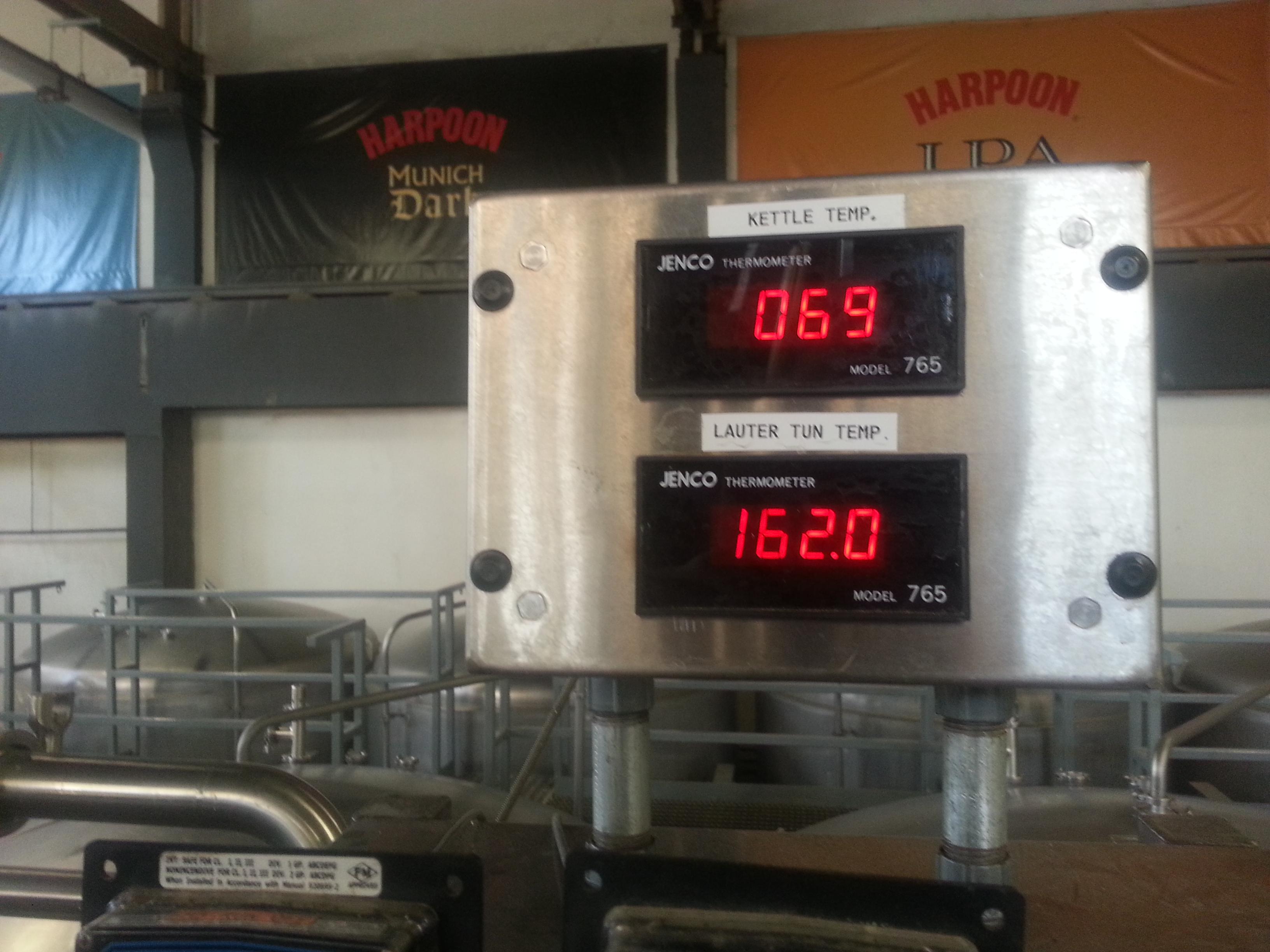 Top temperature is the kettle temp, bottom is the mash temp
With 500 lbs of grain, the mash-in process took about 35-40 minutes. Most of the conversion was happening while we were mashing in, so the mash rest only lasted 5 minutes. Afterwards, we opened the tun back up and started the vorlauff. We recirculated the wort for about 20 minutes until the grain bed had settled and were able to start sparging after that. Under the false bottom, the wort was pumped into the boil kettle while the bulbs at the top of the mash tun sprinkled the sparge water onto the grain bed. Sparging took another 30-40 minutes. 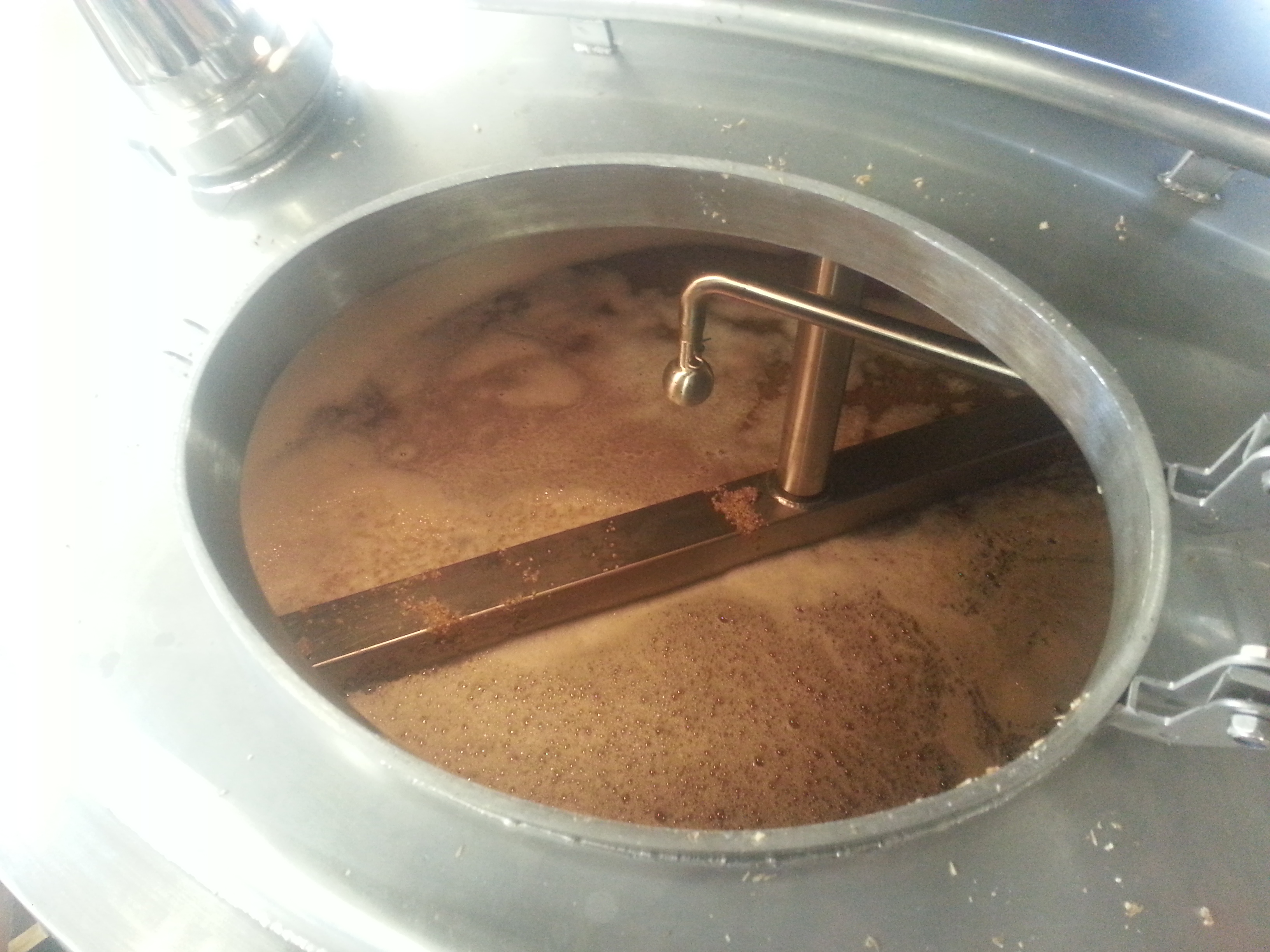 Full mash tun, just before starting the vorlauff
Nick was checking off every box in the "looking sexy" sheet. Er, I mean, filling out the brew log. 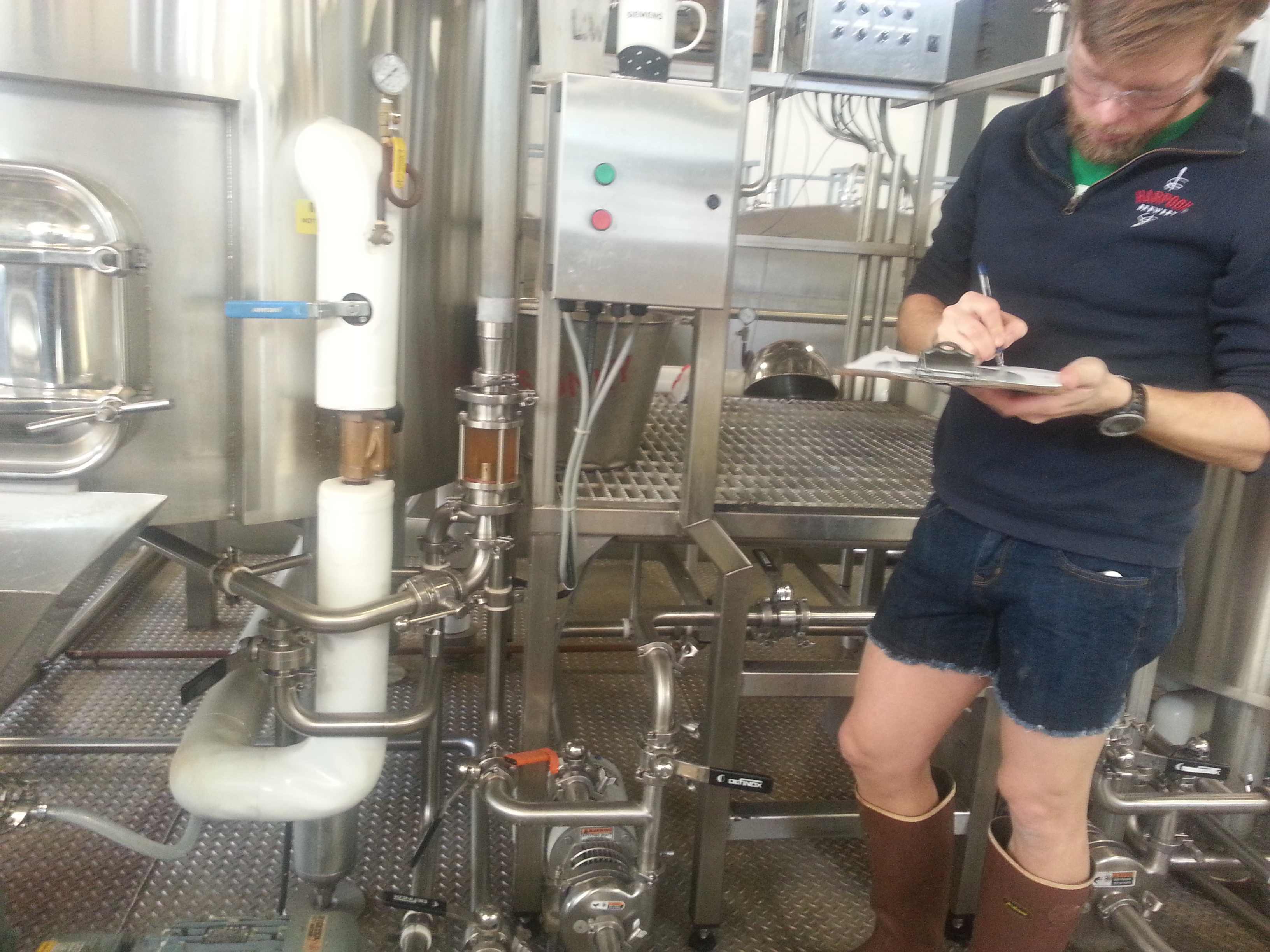 Who doesn't like cut-off jean shorts?
We were using a German Helles yeast for this brew. They don't usually use this strand of yeast, so it was propagated by another brewer there who had done a decocted German Helles. We were using one of their 5 small fermenters that holds 400 gallons. We had to connect our sanitized fermenter to the one that held the German Helles, and transferred the yeast to ours. We ended up with about 15 gallons of yeast in the fermenter. We did this while the sparge was happening. 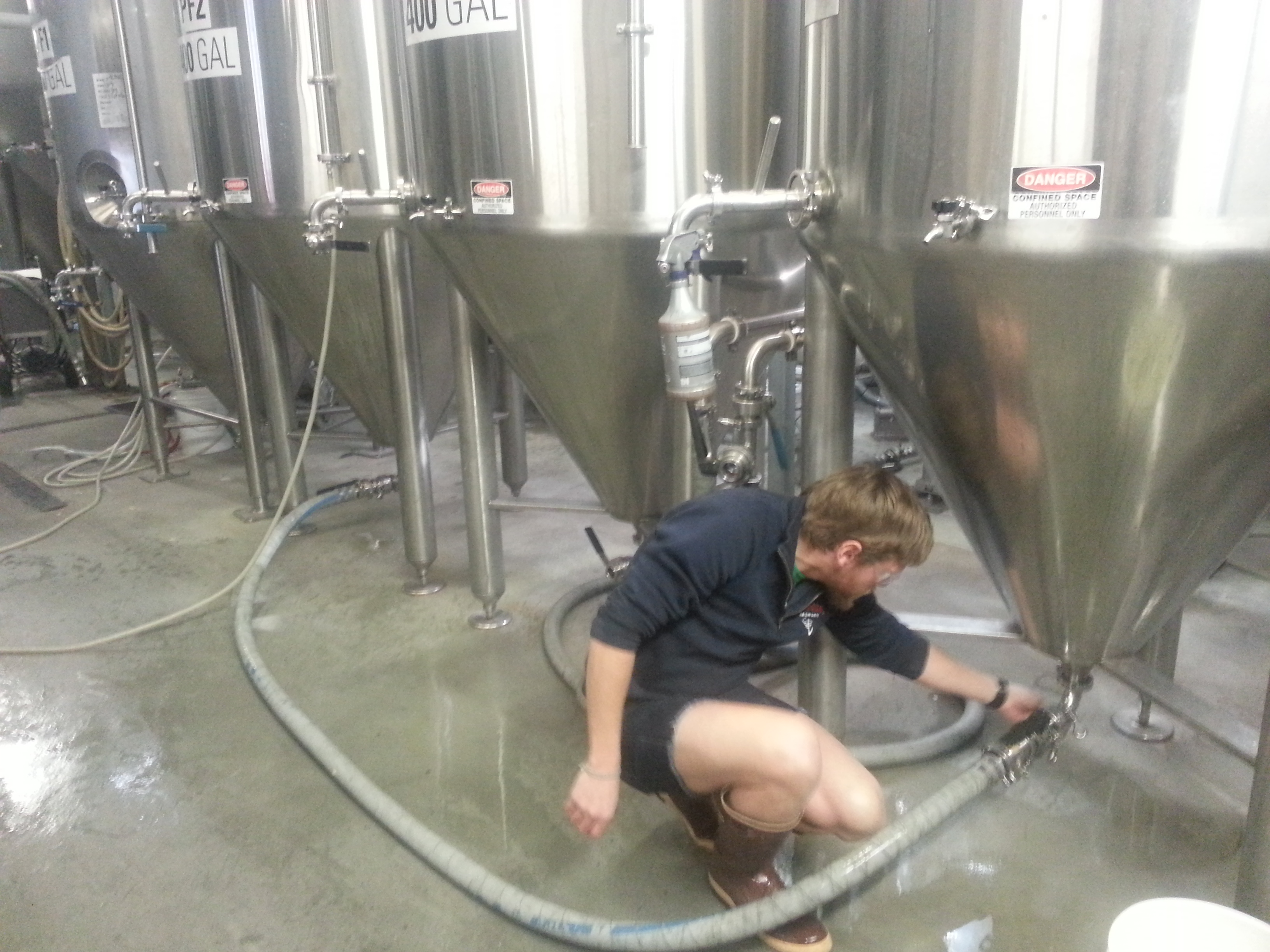 Transferring about 15 gallons of yeast
The wort is in the kettle, and heating up. 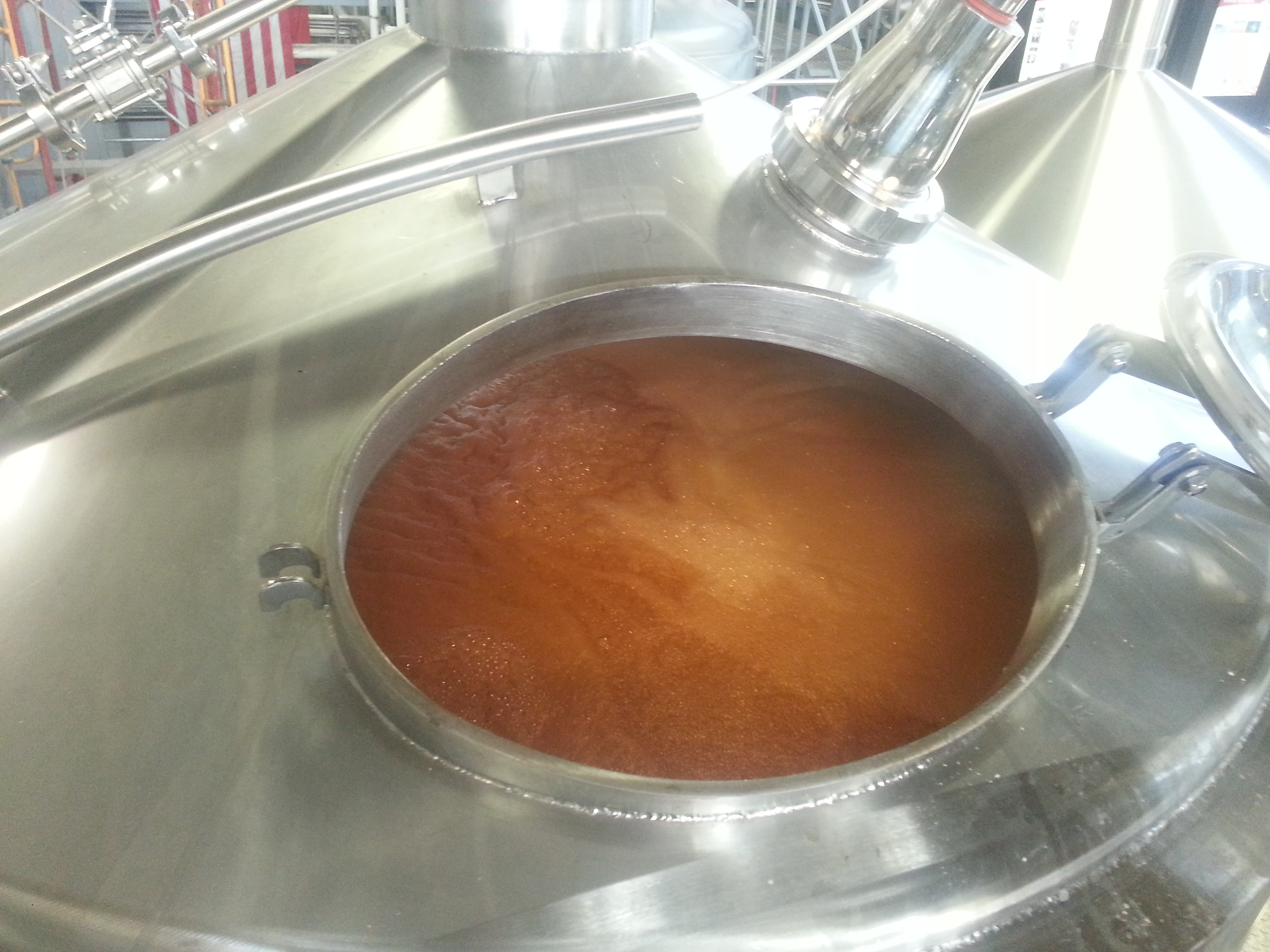 The wort is collected and on its way to a boil
The 500 lbs of spent grain gets pushed onto an auger and moves it all into a silo outside the building. The spent grain gets picked up twice a week by a dairy farm in the area. 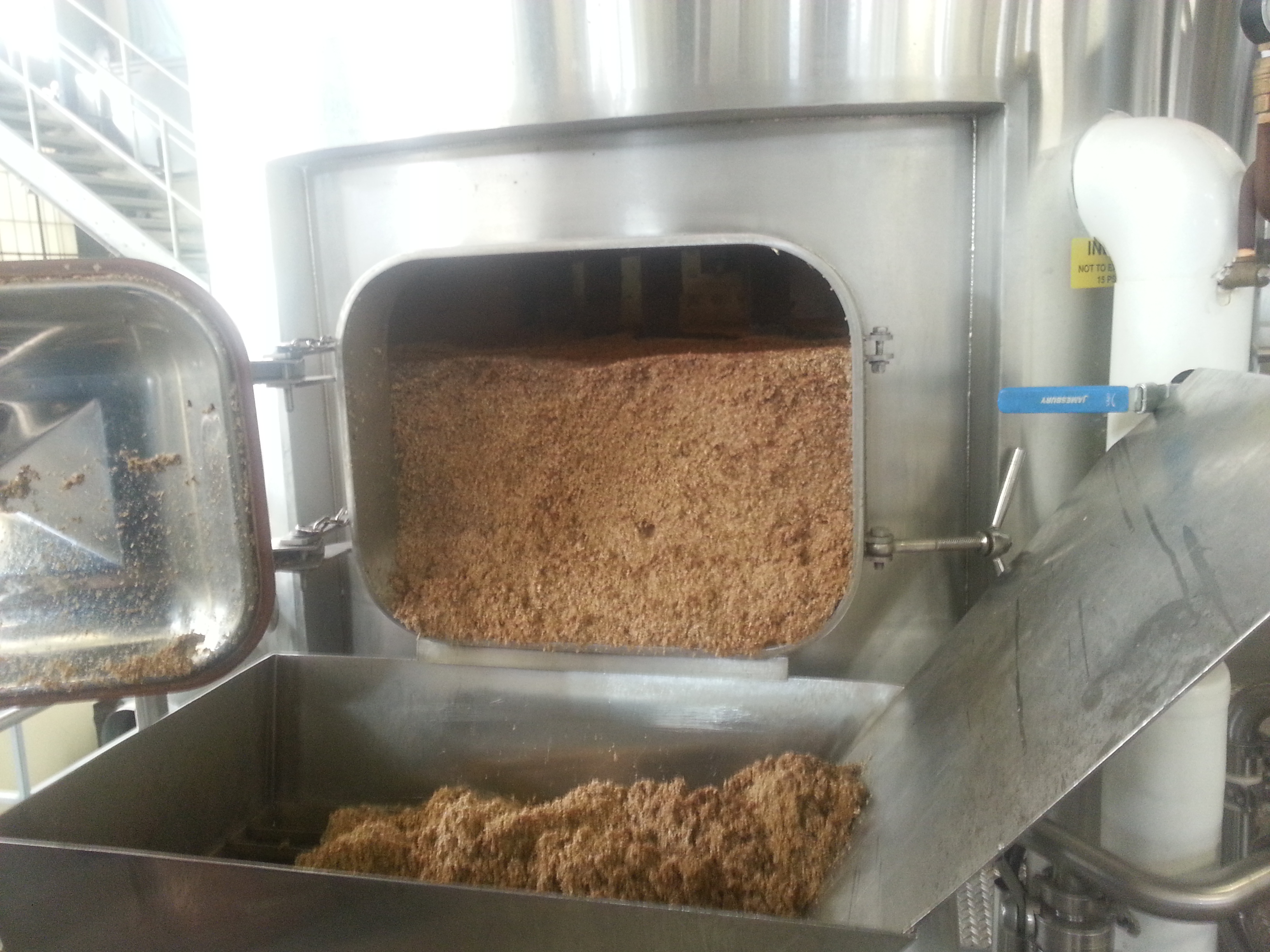 Spent grain!
The kettle is coming up on the hot break. Just about to a full boil 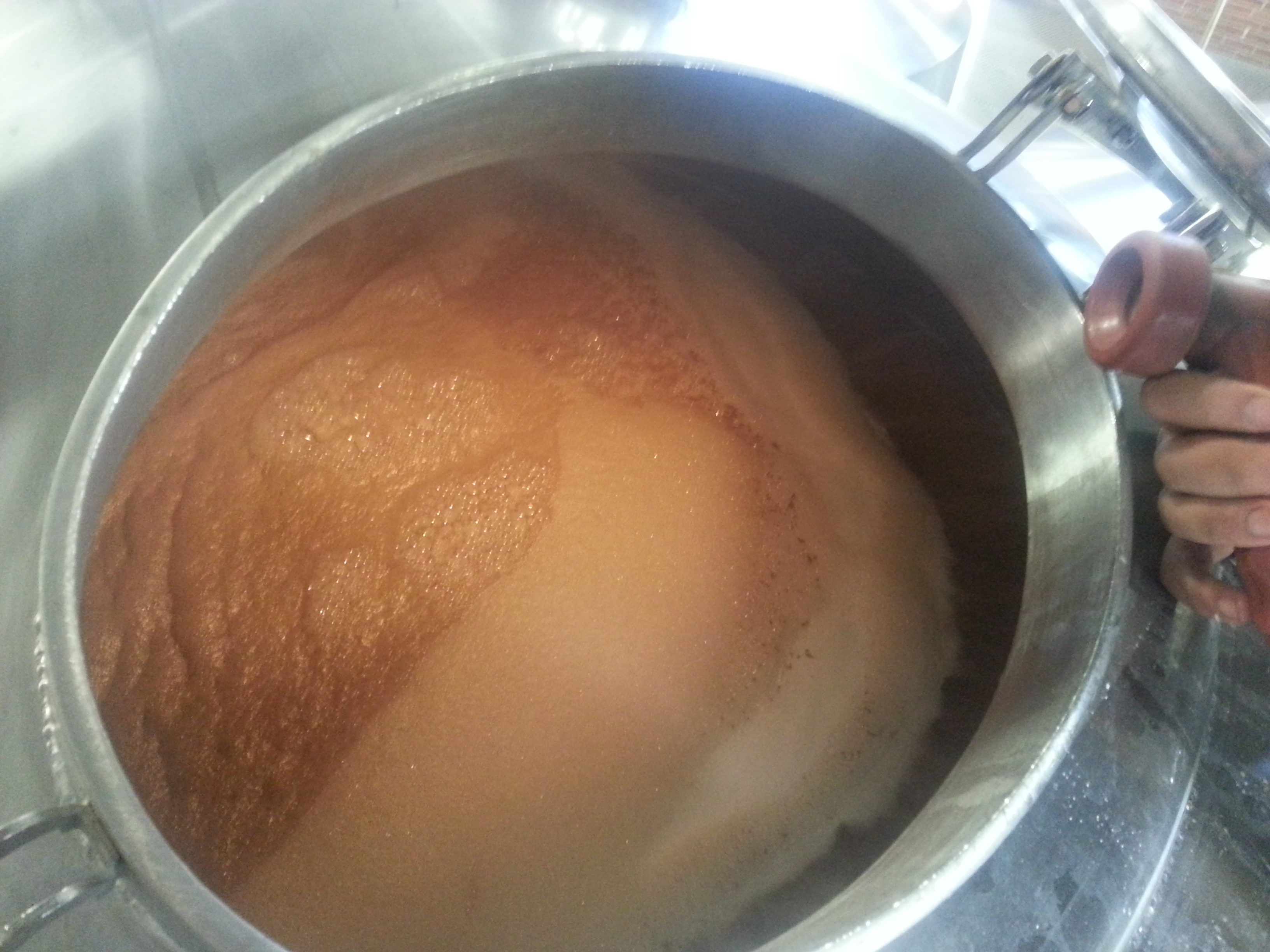 Hot break. The boil isn't too far away now
The spinning mash paddle pushes the grain out the door into the bin below. 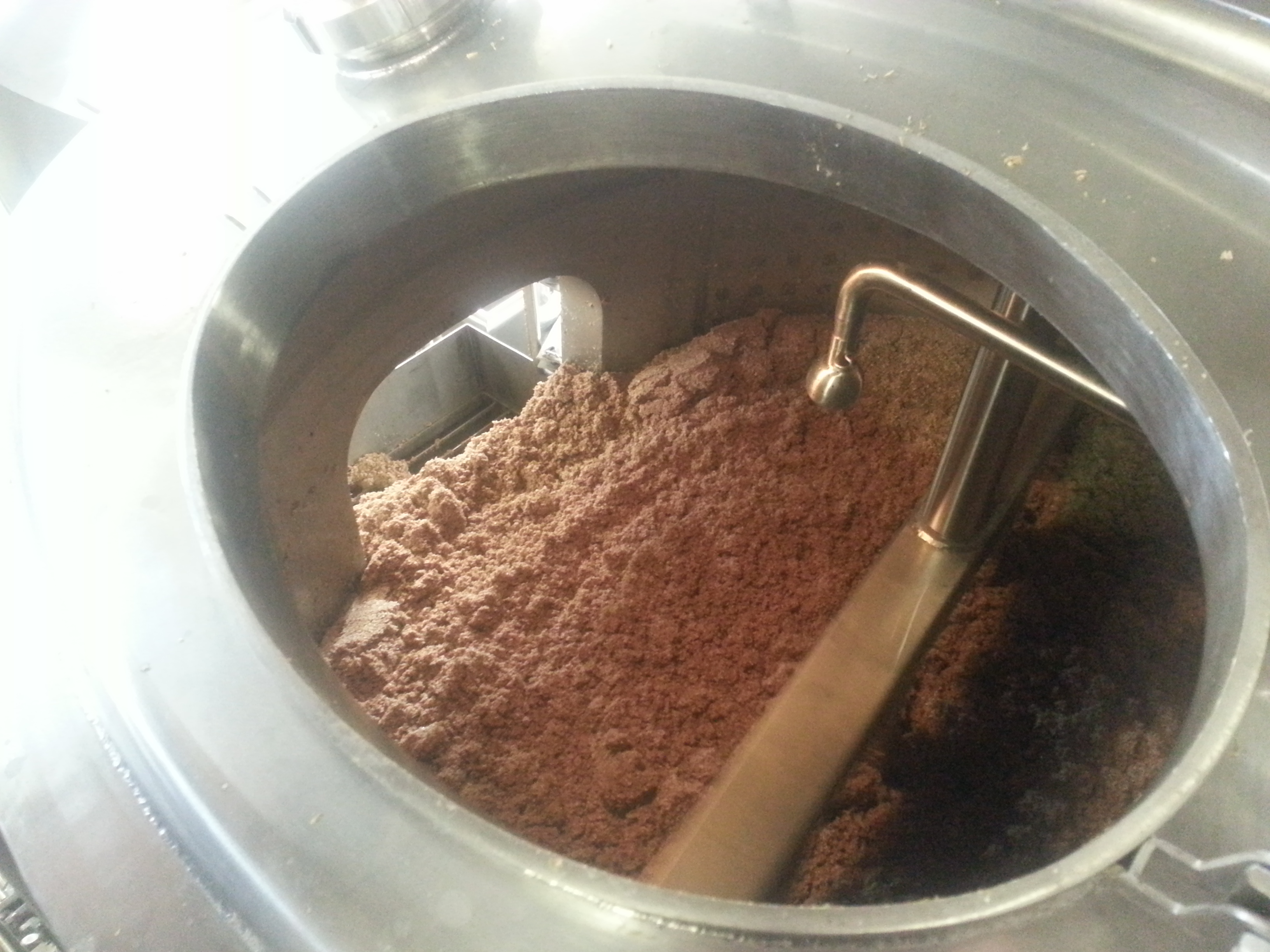 Cleaning out the grain 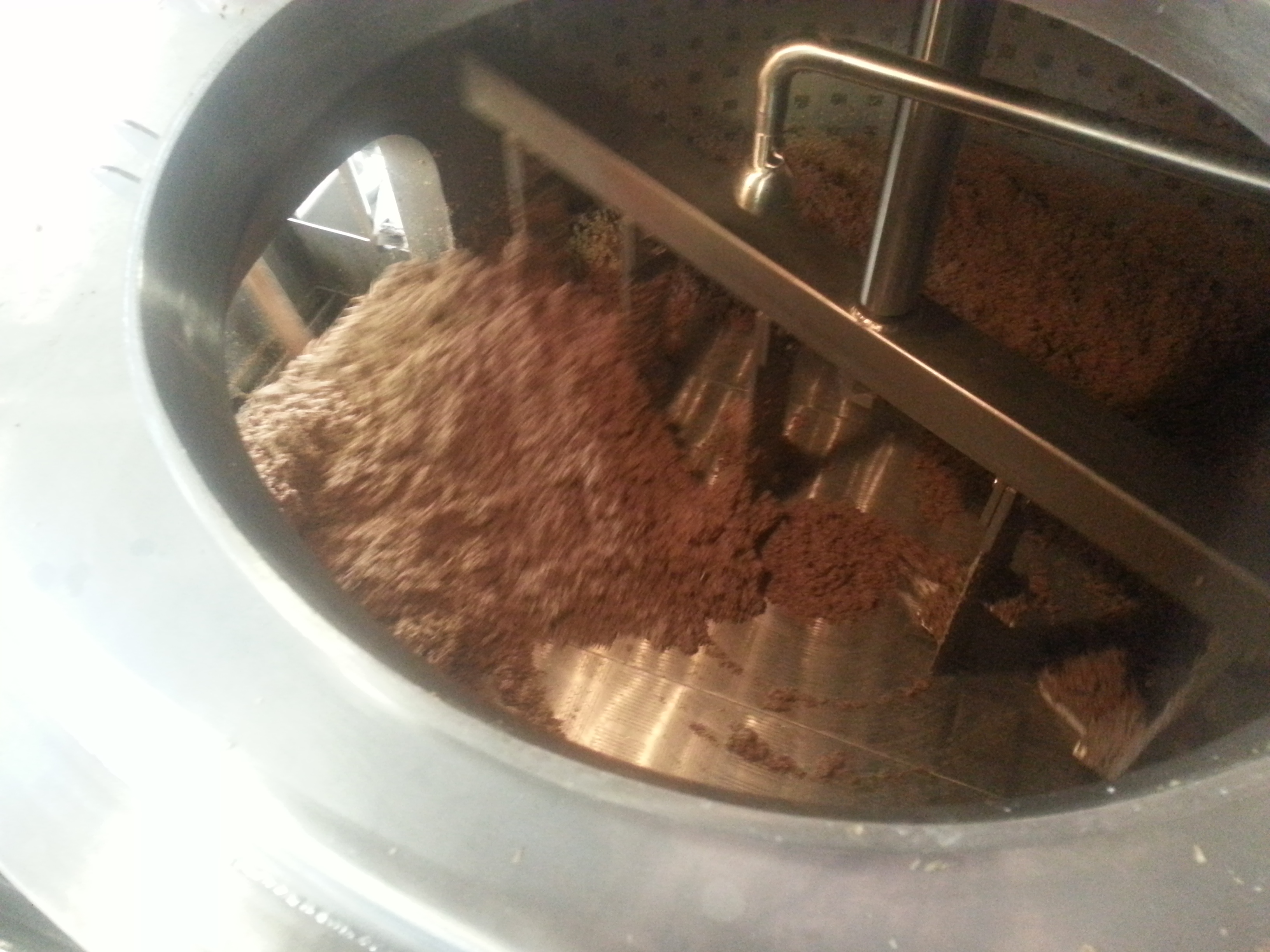 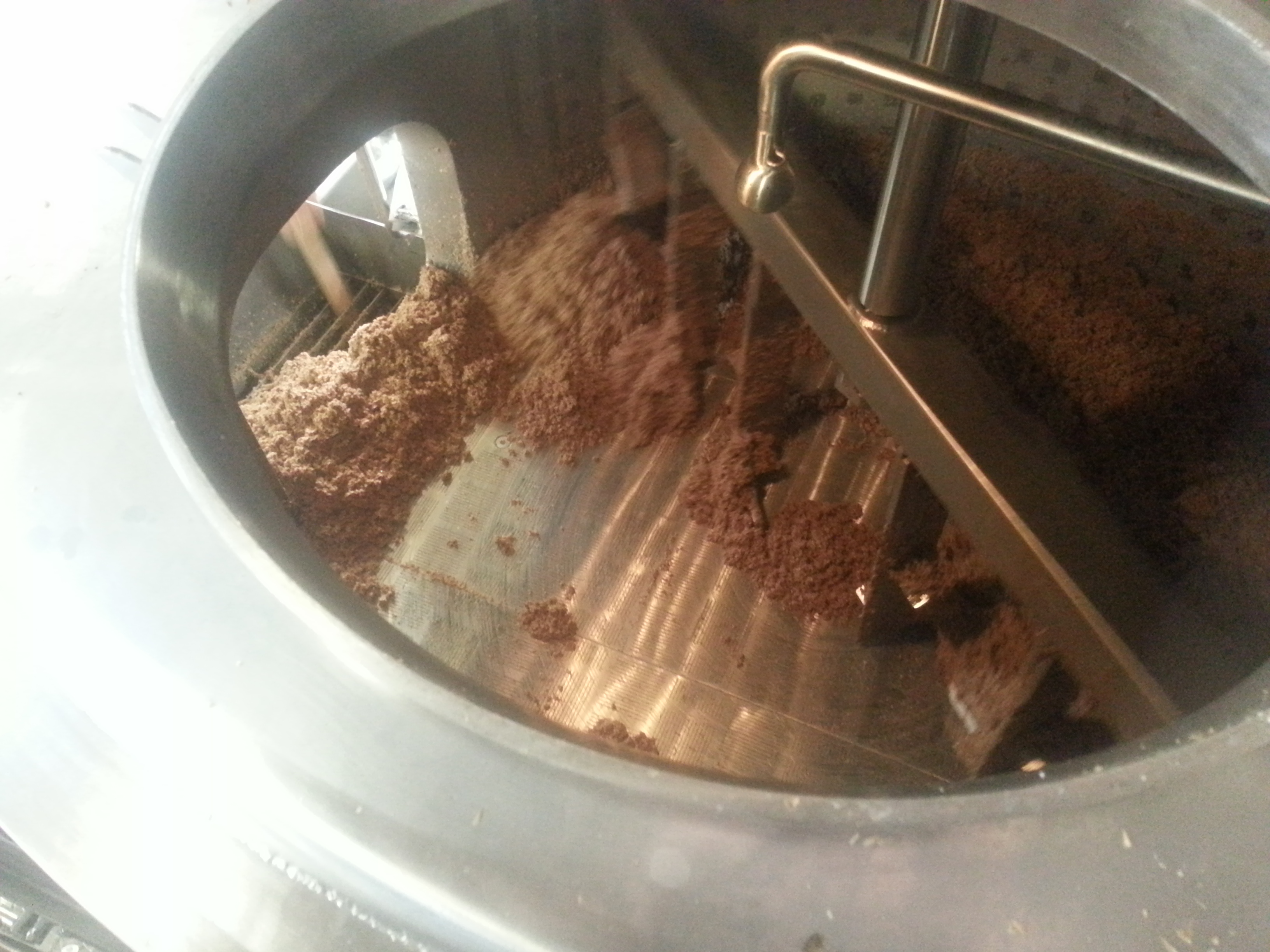 Almost have all the grain out now.
While the tun is being cleaned out, we've reached the full boil in the kettle. We kept a hose with a spray nozzle handy in order to fight back against the hot break. A couple quick sprays here and there ensure that we didn't have a boil over. This was a standard 60 minute boil. 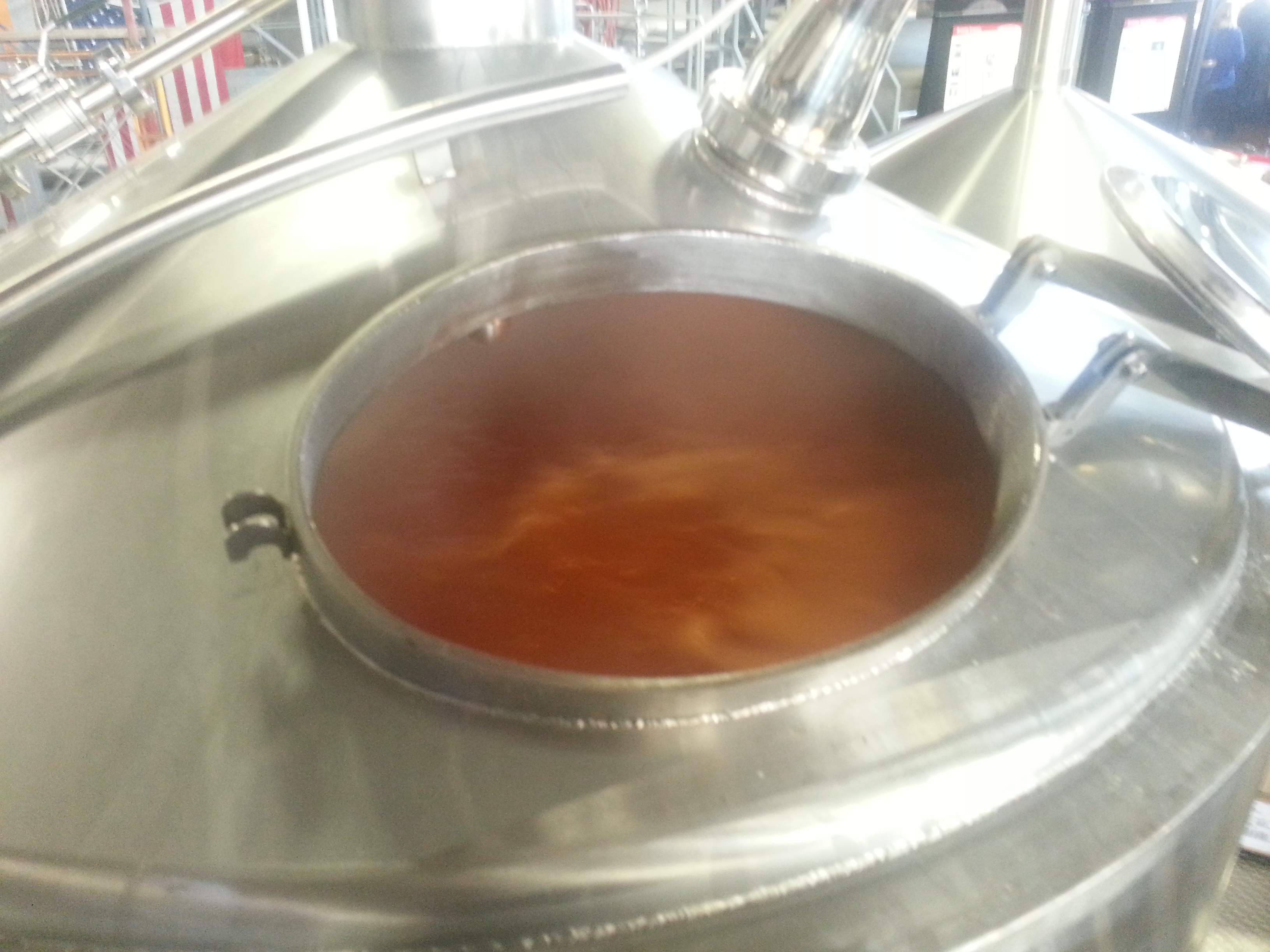 We've reached full boil
The mash tun was nearly empty, we just needed to spray out the last of the grain. 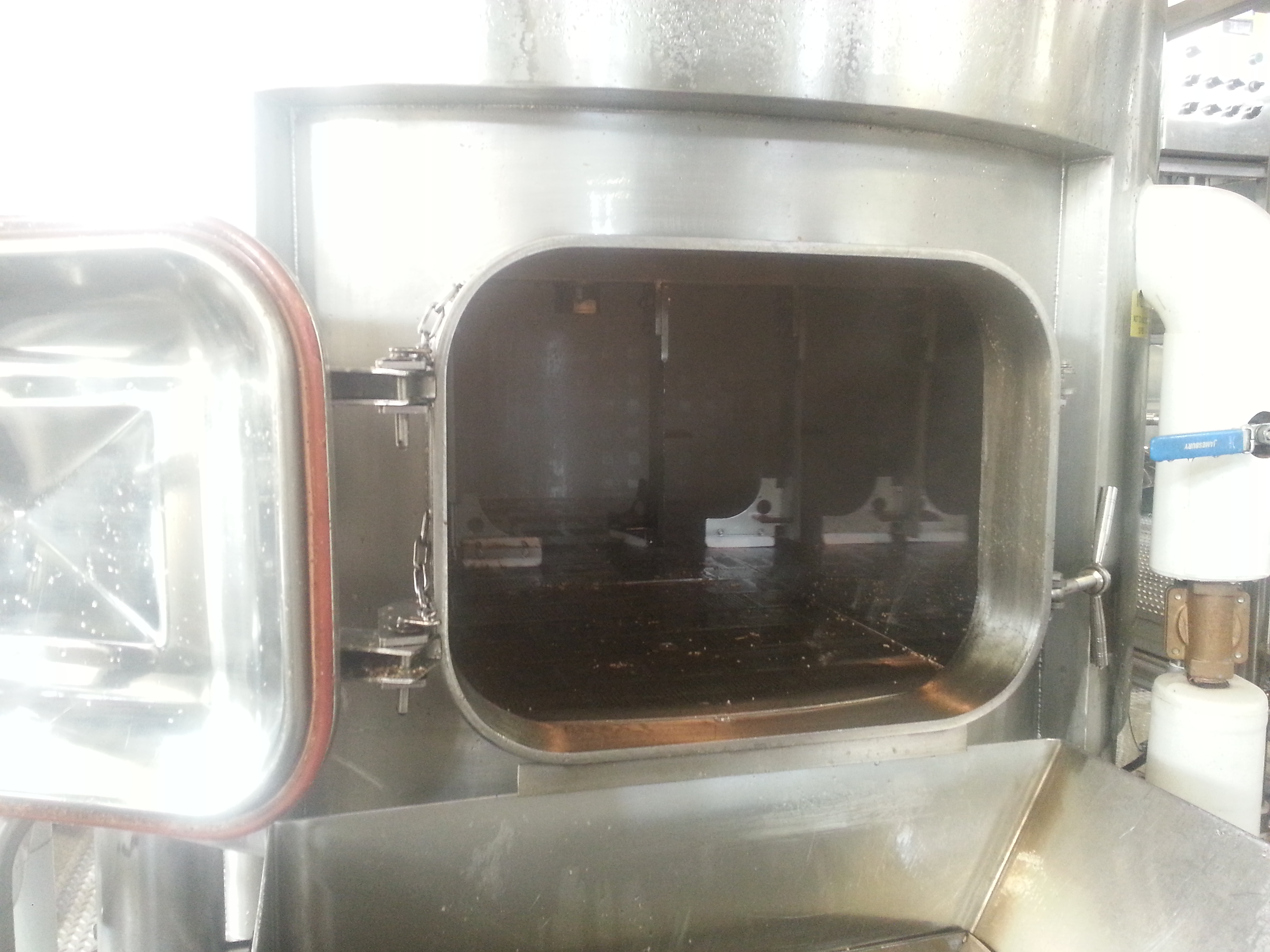 Almost fully cleaned
While the boil was happening, we went down to the hop room to gather our salts, nutrients, and hops. This was a very lightly hopped beer, with the first hop addition coming in with 10 minutes left of the boil. We were using a new hop, Hallertau Blanc, which smelled absolutely heavenly. Hallertau is one of my favorites; and this smelled like good, fresh, Hallertau hops along with some nice melon aromas. 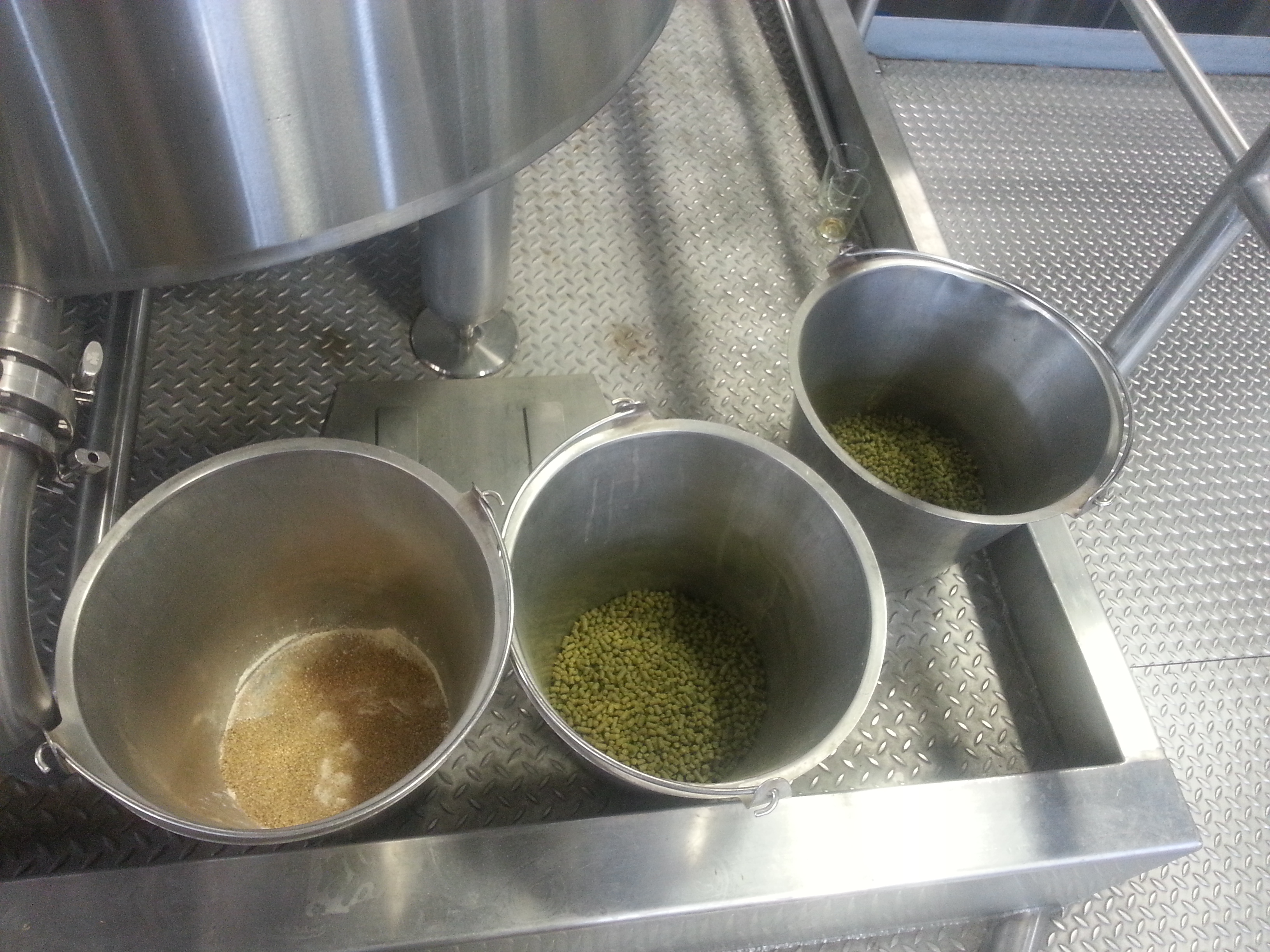 [Left to right] Calcium Chloride and yeast nutrient, Hallertau Blanc, Hallertau Blac
Nick was attempting a new technique for the first time ever in the brewery. After cleaning out the mash tun, we sanitized it and were going to push the post-boil wort back into the mash tun and use it as a hop charge with whole flower hops. 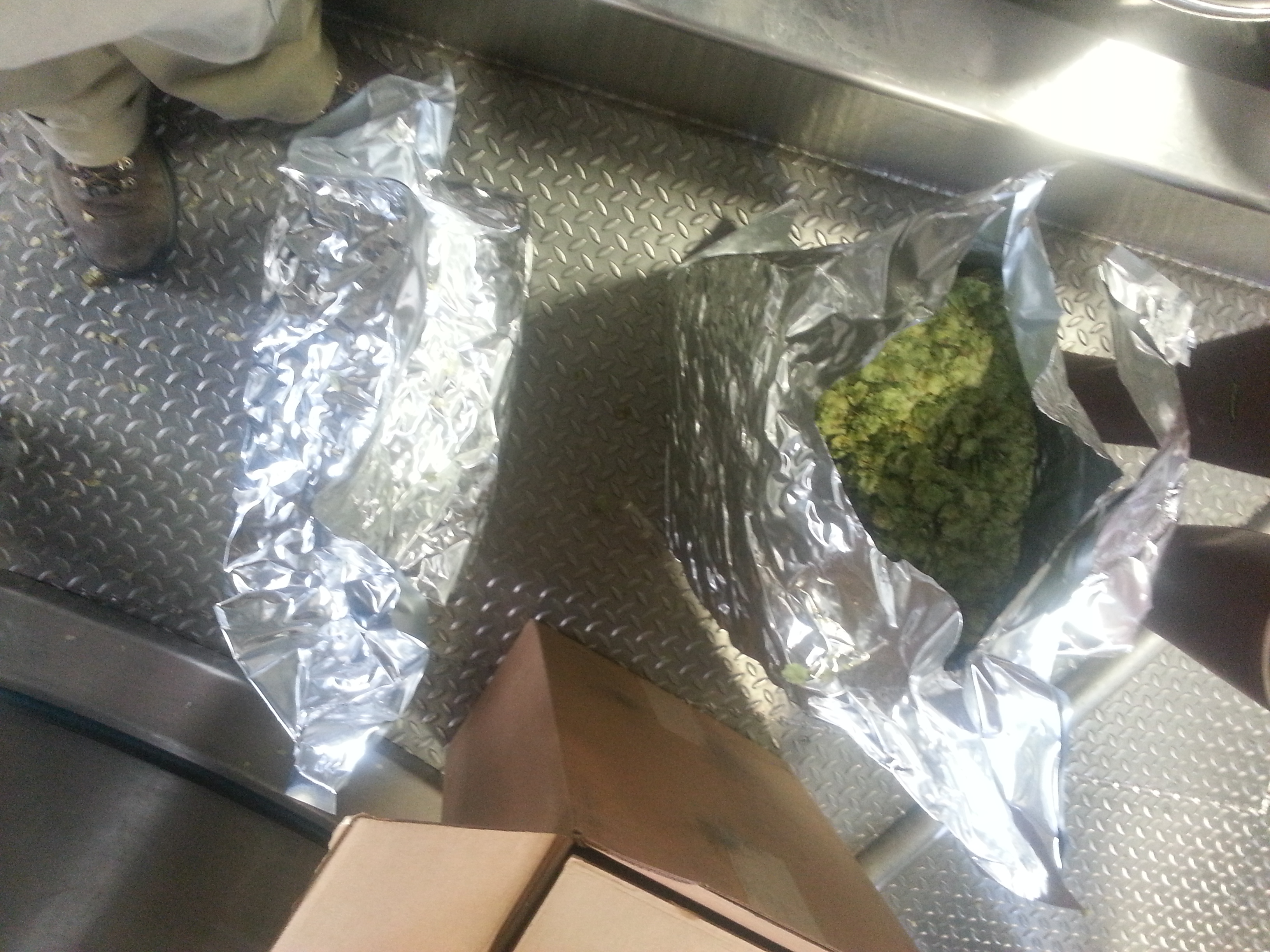 Two 5 kilo bags of whole cone hops
The boil was over, the wort was being pumped back into the mash tun, so we started dumping in the hops. 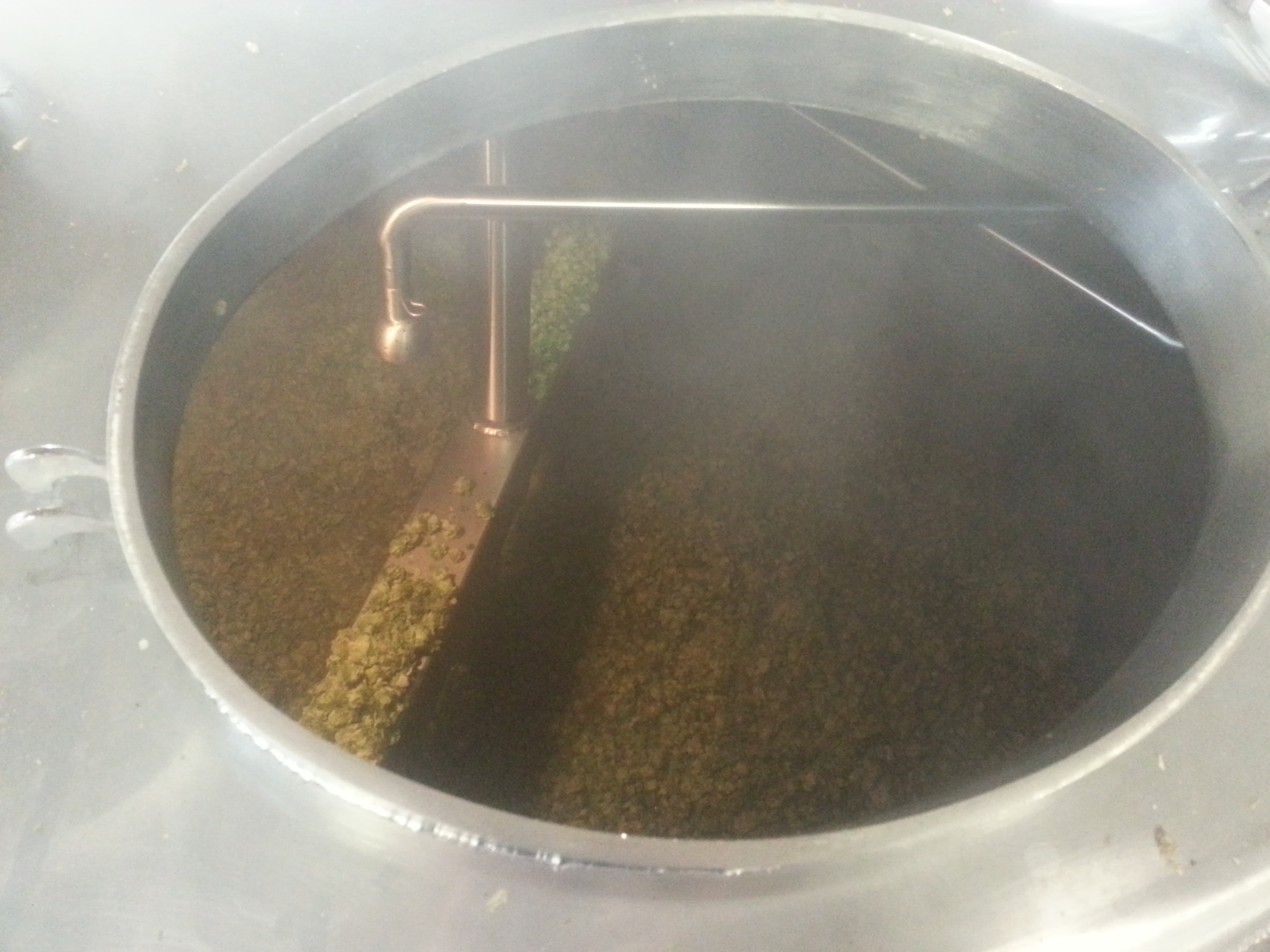 This smelled pretty incredible
We grabbed the paddle to mix it all together and homogenize the wort with the hops. After a minute or two, the pipes were opened to let the wort go through a chiller and into the fermenter. 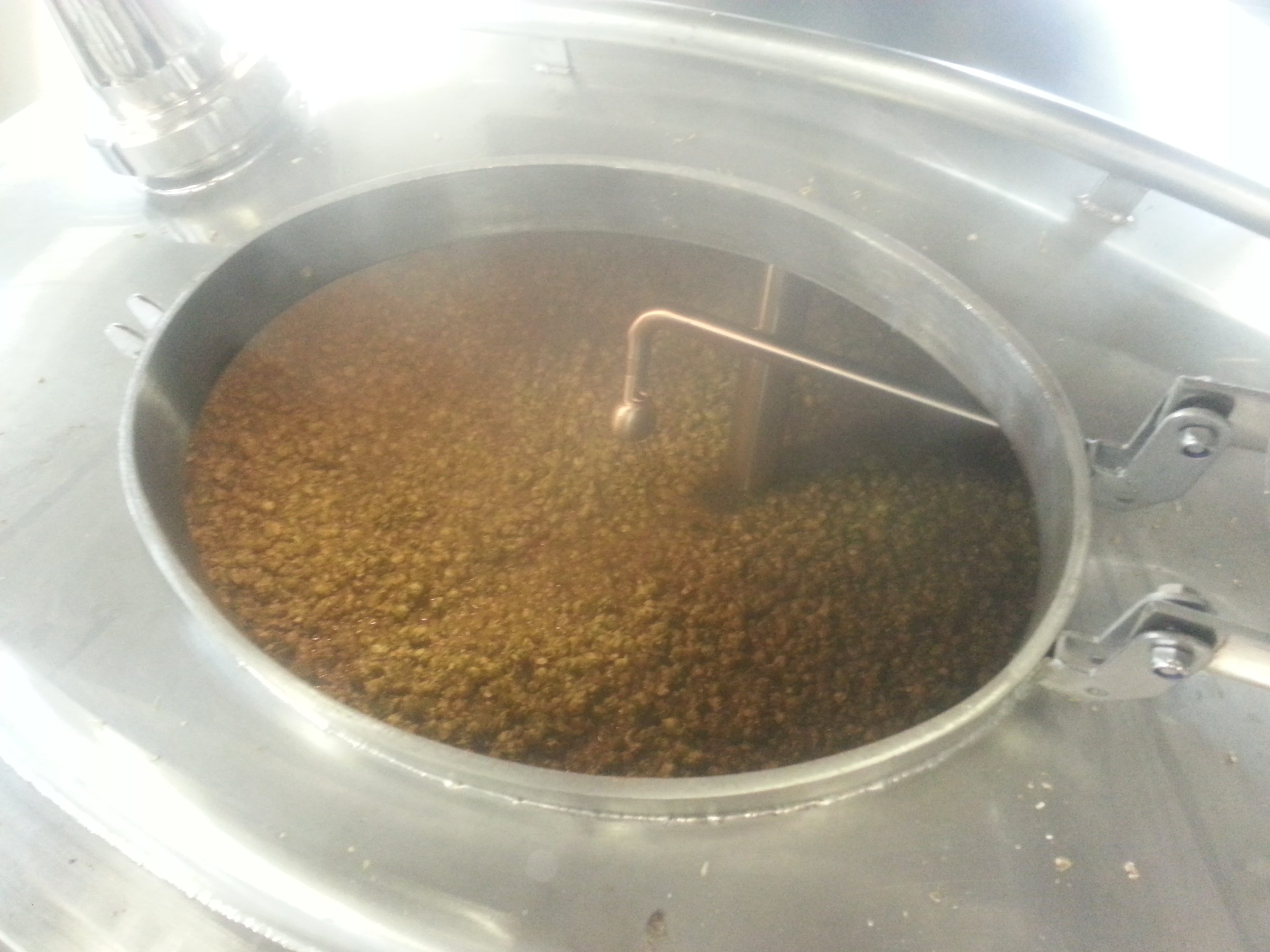 Mmmmm, still smelled great
While the tun was draining the wort, we emptied out the kettle and started cleaning that out (which luckily was just spraying it down with a high pressure hose). Hop sludge and trub were drained out. 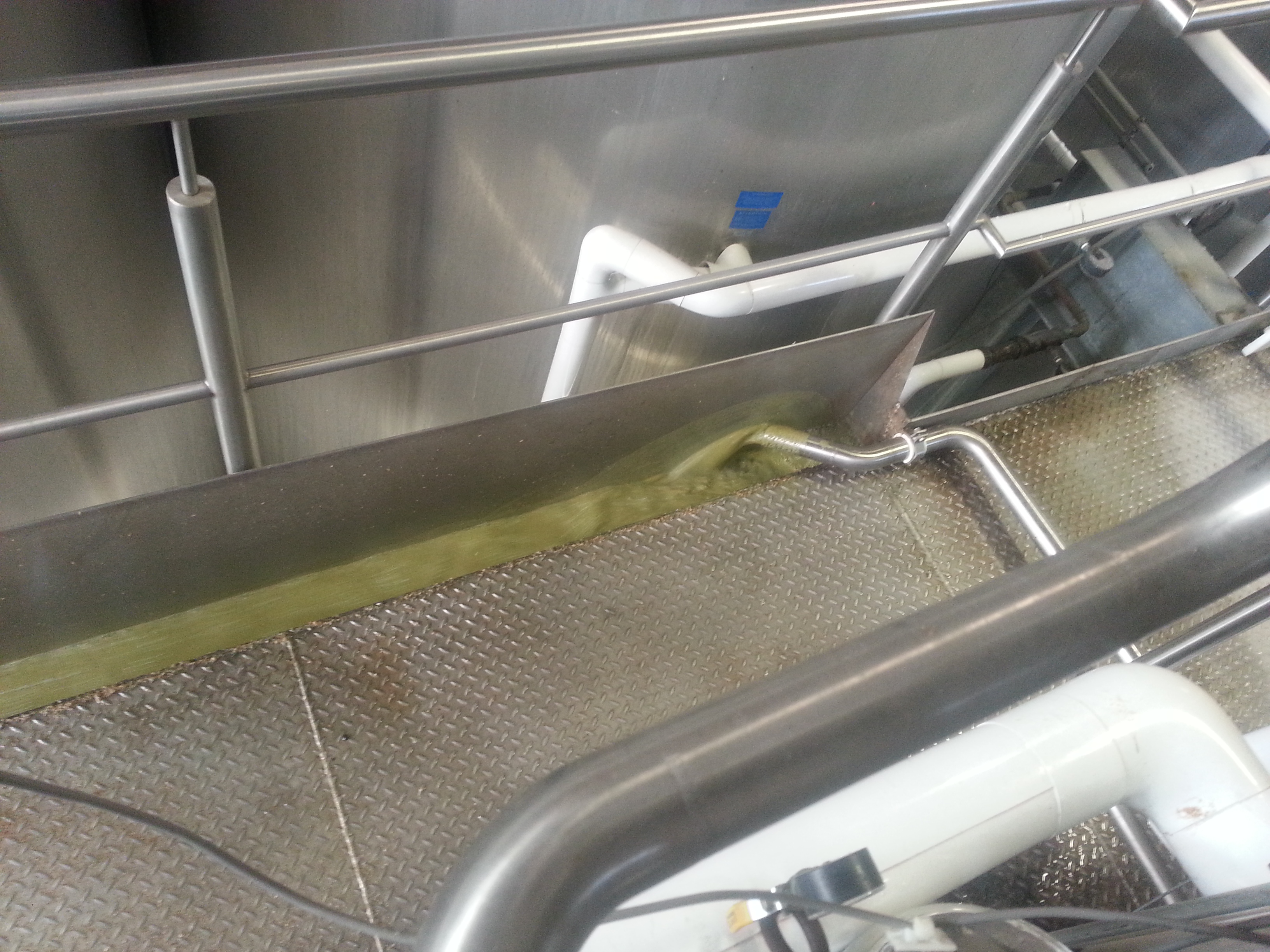 It looked pretty great and kind of gross at the same time
Twenty two pounds of rehydrated whole-cone hops take up a lot of space when all's said and done. 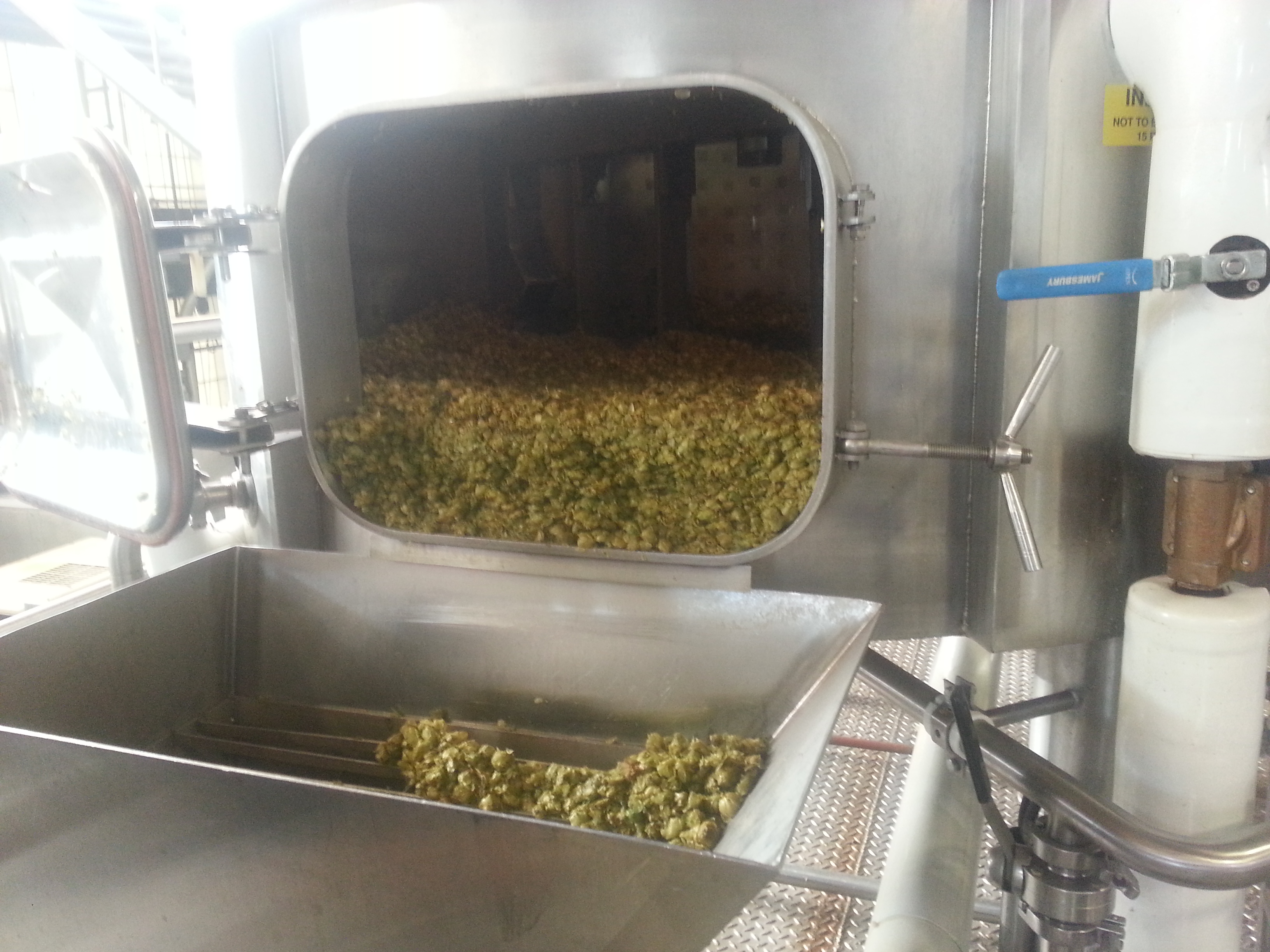 That's a lot of hops
Overall, the two of us getting to "help" brew pretty much ended up being us turning a knob or two, opening and closing pipes, and watching Nick do his magic. It was all still pretty great, and I'd gladly go back and do it again.
It was pretty striking to see the similarities between home brewing, and small batch brewery-brewing. The most surprising thing to me was the 5 minute mash. Since most conversion is happening during the 40 minute dough-in, it doesn't need to rest much, and the rest of the conversion will happen (if there's any more starches to convert) during the vorlauff.
I almost forgot to mention - there are no recipe details here because they want to keep it proprietary.

That is really cool, and an interesting overview of their process, especially the conversion during grain in... and the single infusion for a lager.

One note, not related. I am shocked that Harpoon would allow any brewer to wear shorts and boots like that. Nearly every probrewer I know has been bitten by some part of the process and had a boot filled with hot liquor, wort or cleaning chems. ALL of them now wear long cotton pants OVER their wellingtons to prevent spills from filling up that boot and require such from their employees!

mchrispen -In defense of jorts and boots; They run a 5 day week/24 hour brew schedule and Friday afternoons are their winding-down-clean-up-for-the-weekend days.

I really enjoyed those pictures and descriptions as well. I thought it was interesting about the "5 minute" mash. That is crazy. I was curious about pro brewers using a mash paddle. Can you enlighten me? I saw that guy stirring but if they have those big metal stirring things what is the point of using a mash paddle? Is it just to feel like the old days of homebrewing? haha. I am sure it serves some purpose but I guess I would like to know for sure.