My normal brew day goes something like this: 8am pick up RO water, mashing by 9am, draining first runnings by 10:15am, do one batch sparge, have a nice rolling boil a little after 11am, and start cooling down my wort by 12:30pm - 1pm at the latest. Fill up carboys with cooled wort, place them into the fermentation chamber and pitch yeast. Everything is cleaned up and back in its place, ready to go for next time by 2pm; a nice and tidy 5-hour brew day from water to wort to future beer. 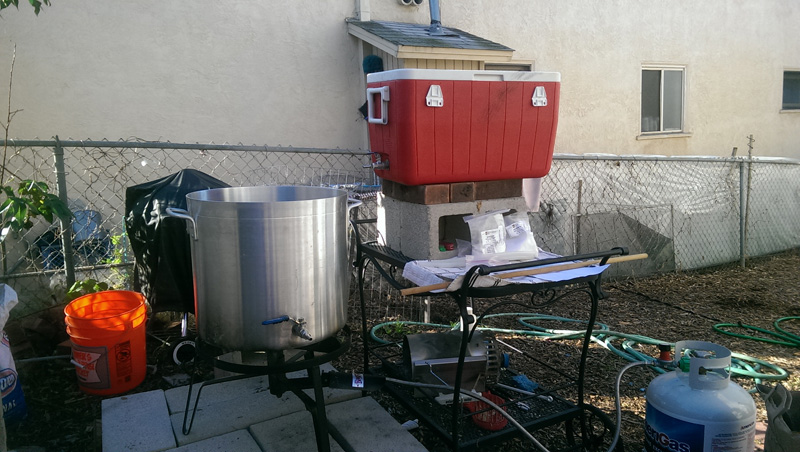 So what drove me to have a boil longer than my normal brew day? Well, it started with an article called "Meeting 'Mr. Maillard' After a Nine Hour Boil". The article describes a very simple process to make a very complex thing. It talks of food science and history and making something that's unique to what brewing has become today. The article focuses on Gigantic Brewing's barleywine Massive. Massive is a simple beer that belies the tasting notes you'll find online, and that's what intrigued me to make a similar beer. Based on Gigantic's own recipe, Massive uses 100% Thomas Fawcett Halcyon malt with Magnum hops for bittering, Cascade and Willamette for aroma and flavor, and then it's dry-hopped with Mosaic. Even before I looked up the recipe (and before I finished the article) I knew I was adding this to my brewing queue.

Now that I had a new far out there beer to brew, I had to come up with a recipe to call my own. Sure I could just make a Massive clone, but what's the fun in that? I like taking multiple iterations of tried and true to-style recipes and tweaking them here and there to make them my own, but with only one recipe... that's kind of hard to do. The obvious base malt choice was plain old super simple American 2-row. Living in San Diego, I can't walk down the street without being hit with fruity/tropical/juicy hops flavors, but I didn't want that here. I wanted herbal earthiness with spice and pine and just a touch of citrus. I decided to make this a truly American barleywine with Warrior hops for bittering, Liberty and Glacier hops added late to the boil (very, very, very late), and a flameout addition of Simcoe hops.

Crazy brewing idea: hatched. Recipe: generated. Now I had to bring it all together and brew. I had a robust porter already in mind that I wanted to age on tart cherries, so I figured I'd use the porter as a starter since it was going be a smallish beer with not a lot of hop character. Brew day came and I picked up 15 gallons of RO water. After grain absorption I'd be left with around 12 gallons to boil down to 5.5, which sounded about right to me. So I heated up 7.5 gallons of water, added 1.5 tsps of calcium chloride and 3 tsps of gypsum and mashed in. I mashed at 148F for an hour and drained the first runnings into my boil kettle (saving a sample of the wort to monitor color change). I added the remaining 7.5 gallons of 180F sparge water (untreated) for my batch sparge, drained that into the kettle, and started the boil. After the hot break subsided, I adjusted my flame to have a nice low rolling boil, and waited... and waited... and waited... and, you guessed it, waited. 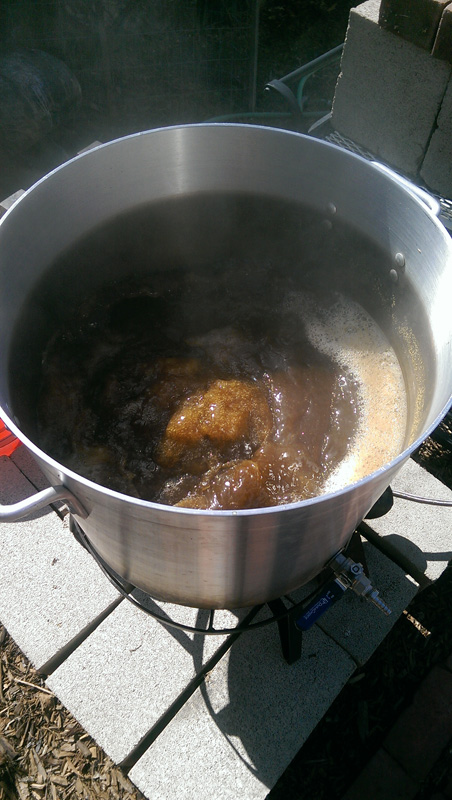 After about 2.5 hours in, I realized I was boiling off faster than anticipated, so I had to run and get some more water. I came back, added 2 gallons of water, cranked the flame up and got it back to boiling in no time. I then took another sample of the wort for comparison purposes, and was quite pleased to see a pretty dramatic color change already. Coincidentally the gravity readings between first runnings and the second sample were almost identical, so the color change was definitely from the boil and not just concentrating sugars. At the 6 hour mark, I checked the liquid level again and realized I was already at 5.5 gallons in my kettle, so I added another gallon of water, brought it back to a boil, and added the Warrior hops. 45 minutes later I added my first round of Liberty and Glacier hops. 10 minutes after that I added my second round of Liberty and Glacier. I turned the flame off after 7 hours, tossed in the Simcoe and let that stand for 15 minutes before cooling down. I got the wort down to around 70F before draining it onto the porter’s WLP090 San Diego Super Yeast cake. I placed it in my fermentation chamber, slapped the temperature probe on the carboy and set it to 64F. Visible fermentation started in a few hours and after 12 hours with an already very vigorous fermentation, I decided to drop the temp to 62.5F to try and keep fermentation as clean as possible during the first few days.

I took one final wort sample for color comparison's sake before the first addition of Liberty and Glacier hops. The gravity on that was a healthy 1.120. Now I should have diluted this down to around 1.070 like the other samples for a true color comparison, but I was too excited that this crazy idea seemed to have worked to think of that at the time. As you can see, the color change is quite dramatic. But what you can’t see is the taste difference. The first runnings taste like the most boring sweet simple grainy sugar solution ever. The 3.5 hour sample has a complexity to it that I was surprised by even though I was expecting it. It was fruity and with a sort of sourness in the background (not acidic sour though; it’s hard to explain) with no caramelized sugar taste at all. The final sample was just like the 3.5-hour sample only kicked up many degrees. The OG ended up at 1.122 and it smells like heaven. Time will tell how it turns out, but as of right now, I think I've got a winner of a beer here. 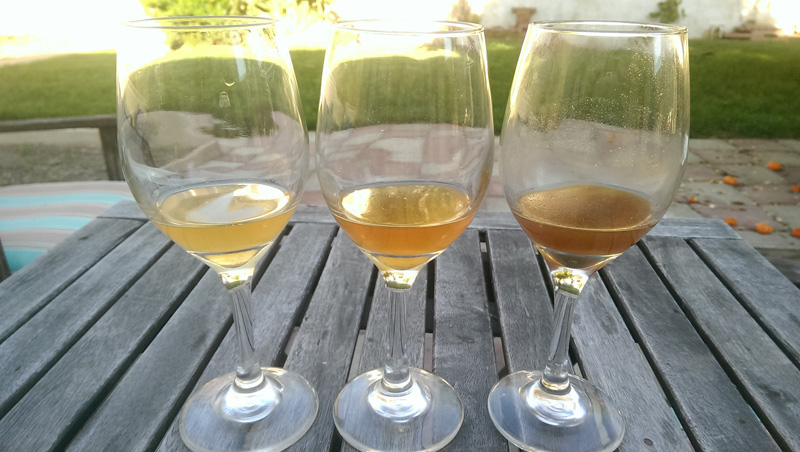 The effects of boil time on color.