It's Dumping time - I Have my First Infected Batch of Beer

Today marks a sad day for me in my brewing career - today is that day that I have decided to dump a full batch of beer without packaging a single drop of it. This is a first for me in better than three and a half years of brewing; while I had had my well-documented challenges with bottle infections, I've never experienced a traditional "infected" beer of the type where one has visible bacterial growth in a fermentor. As of June 21st, 2015 (better known in the US as Father's Day), this has officially changed.

Way back at the end of November, I brewed a beer that I had really high hopes for. Sure, I tend to have high hopes for all of my beers, but this one had a special place in my heart - it was an attempt to replicate a truly world class beer (namely, Hofbrau's Oktoberfest).

This brewday involved a simple wort - nothing but pilsner and Munich malts with Hallertaur hops - but also featured a complex, tradition-driven process. I did a full triple decoction for this beer in an effort to extract the full range of melanoiden-powered flavors that the grains were capable of providing. I then performed a traditional "low and slow" lager, dropping the beer to 33 degrees F once fermentation and the diacetyl rest had been completed, where I then would leave it for months.

However, my brewday was set against the backdrop of the great outdoors on a particularly blustery day, and that proved to be my downfall. You see, on that particular windy day, the leaves were flying fast and furious on the breeze; our autumn had been fairly dry and calm, and up until that day, relatively few leaves had fallen. That brisk afternoon brought a change to that; the wind was taking care of the long overdue task of stripping the dead leaves from the trees. I personally witnessed three or four hit my kettle during the boil, but I was not terribly concerned; I was swift to pluck them out of the wort... and besides, this was pre-chill, so I figured that anything that might otherwise contaminate my beer would be killed by the boil.

Of course, I did not stand over the beer for the entire ninety minutes of the boil... and clearly, this was a mistake. On that fateful day, I pulled my Hydra immersion chiller out after the typical six minute chill cycle, only to discover no less than half a dozen filthy leaves hanging off of my chiller's coils. My high hopes for the beer took an immediate nosedive; how long had those leaves been in there? Could one (or more) have fallen in when I was walking back and forth to turn the hose on and off during the chilling process - thus rendering the sanitary benefits of my boil moot? And really, even if there were no organisms contributed from the leaves, I would be kidding myself if I pretended that there would be zero flavor contribution in such a delicate wort.

My worries deepened a week or so later, after primary fermentation was done. I had some bubbles on top of the wort that just looked a little... wrong. Oh, I tried to tell myself that it was nothing to worry about. I repeated the (admittedly valid) advice that I often give to rookie brewers - namely "don't worry, fermentation is an ugly process, floaters and bubbles are normal, it will be fine". And yet, I couldn't quite convince myself.

Between my flavor and bacterial contamination concerns, I never could seem to convince myself to bottle this batch. I kept finding reasons to bottle other beers, to handle other projects. Eventually, I took the beer out of the lagering chamber, and not only were the floaters not gone (which is pretty unusual after a long, cold lager)... but I could have sworn that they looked bigger. So, I did... nothing. I just could not seem to convince myself to invest the time and trouble to bottle a batch that I felt so badly about.

Well, this was Father's Day weekend, and I figured that I would finally bottle the stupid batch. After all, it would be a shame to not try it. I mean, maybe I was just being all doom and gloom for no real reason, right?

Today, I went downstairs with the intention of carrying my carboy up in preparation for bottling. Once I got there, I froze in my tracks. There, I discovered this. 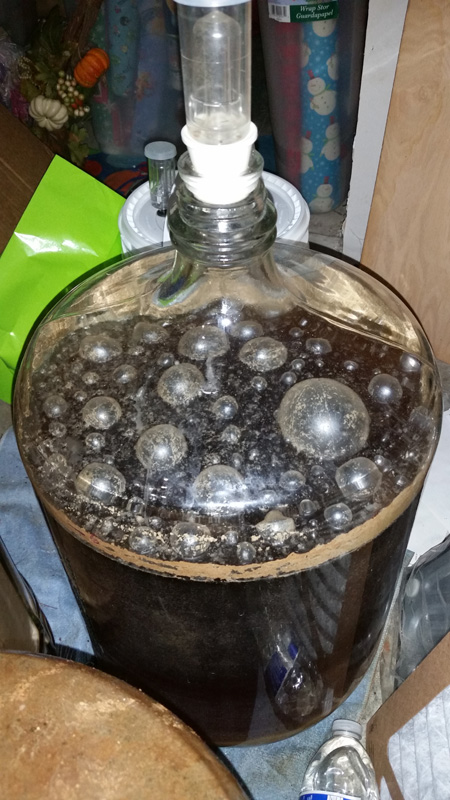 Infected beer, no doubt about it.

Dirty confession time: I've been proud of the fact that I've never had a "real" infection, as I am very serious about sanitation. I put on a polite public face when trying to help others diagnose whether they have an infection, or how to prevent subsequent issues. Most of my beers (with a few notable exceptions) turn out pretty well to really well... and overall, I feel like I make good beer. If I'm going to be absolutely honest with you, inwardly, I'm a little smug about that.

But as Proverbs tells us, pride goeth before a fall. This isn't the first time I've been knocked down a peg, and it surely won't be the last. You would think, though, that I'd learn to keep my big head in check.

Maybe the sting of watching all of that wasted time and potential gurgle down my drain will help to reinforce that lesson.

" If I'm going to be absolutely honest with you, inwardly, I'm a little smug about that."

I think most of us are a bit guilty of that sentiment.

Sorry for your loss.

I feel ya. Just kegged some APA and noticed it seemed strange (some weird bits on the foam while carbonating). Cleaned the conical this morning. Cracked it open and looked inside to find a scrubby floating in the trub... and a pellicle. No off flavors in the racked beer yet, but this has to go very fast or risk going all funky.

Well, kudos to you for not pitching bugs and investing another year or two in a bad beer.

It sucks to lose all that effort, with the triple-decoction and all.

if you have yet to dump that i wouldn't. kill everything with campden wait another week transfer to another clean carboy and campden again. then after another week pitch a starter and priming sugar or put it in a keg. you won't end up with what you had intended but at least it wont be a waste. that infection does not look that bad and it is probably salvageable. worst case you lose a few tabs of campden and a few dollars in yeast starter.