There is something to be said for a hobby that has held my interest for over two years now.  A closet full of equipment from different sports, adventures and mistakes alike.  It is far too easy for a voraciously curious person to burn out on these.  Homebrewing has been a wonderful break into this as there both are far too many things to learn and even then people like Brulosopher like proving those wrong.

The BrewUnited challenge is no exception to this as it pushes us beyond just brewing what we like how we like to.  For myself, that is to put into practice some techniques that I have only heard of yet, Wort Caramelization and the Long Boil.  These sound simple yet these tools are not often used with modern crystal malts and de-bittered dark malts for sweetness and color.  But they fit perfectly within the bounds of making something special for the challenge. 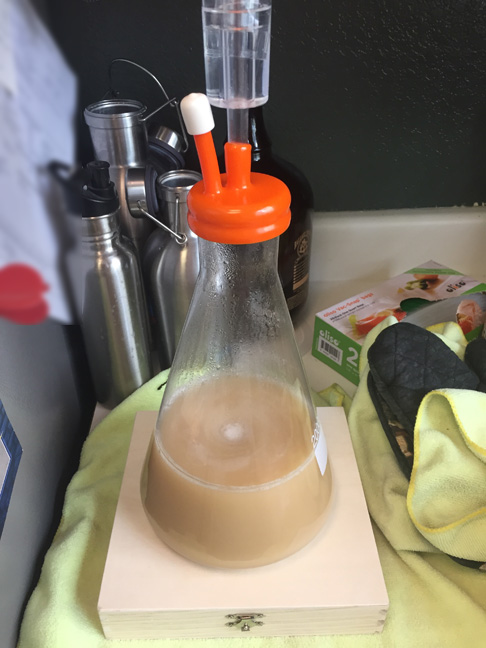 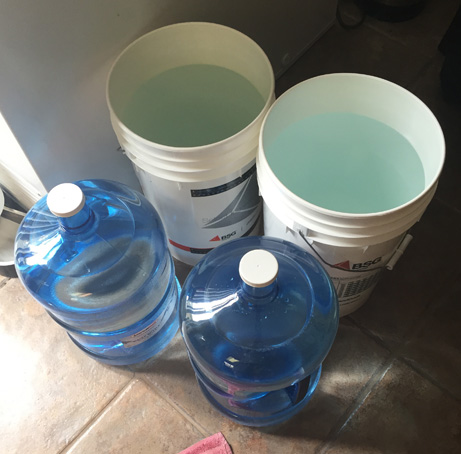 The first thing you likely noted is the bit of mis-adventure of this brew. I will get to that in time, but for now the primary goal of this post. There are two primary techniques that I used in this process, caramalization of the wort and boiling longer than the usual 60 minutes.

With the limitation of only using Crystal 60 in this competition I thought that it would be entirely too limiting flavor wise to just load up on this one malt. Thankfully I remembered a process that my glorious Foam on the Brain club leader did for his sweet Wee Heavy, Wort Caramelization. It's fairly simple but requires you juggle an extra pot in your process. On your first runnings, take off the first gallon of wort into your main pot and boil down while your mashing the 2nd runnings. Stir this constantly in order to avoid the wort from burning. Over the 20 minutes on a propane burner (ex: Darkstar) the consistency should come down to a thin syrup. Afterward you can just add in your first and second runnings and your second should be finished by then.

Other Notes, well open to discussion: Smaller or secondary pots work for this process too but you will need to get some hot wort to try and disolve the wort syrup. This technique might be possible on a stovetop burner but the higher output of the fryer type helps caramelize the wort and not just reduce it to LME. Manage your heat and don't stop stirring for too long as this will foam up quite heavily otherwise, FermCap doesn't help (much). I recommend to have plenty of help from a second person during this time to help stir and make it easier to time the steps.

There was a side effect of using less Crystal 60 and not having access to roasted malts, a lighter color. I didn't have time to start playing with roasting my own malts to help darken the color. There really is enough I was trying to do the first time in this batch I didn't need to add on more. So instead I would use another old tool that isn't used as often now, a longer boil than 60 minutes. There are four primary uses of boiling longer than the usual time when it comes to wort (hops differ). Each of these happen at the same time though so prepare ahead of time or you might find too much or too little of them.

1. Reducing Boil Volume - Used you need to reduce the amount of wort volume to fit it within your fermenter without wasting that precious fluid (it's alcohol abuse otherwise). In my case, I ended up with more wort than I intended, 9 gal vs 8 gal pre-boil to 5.5 gallons. This extended my boil time close to 160 minutes instead of my planned 120 minutes.

2. Increase Gravity - the natural process of evaporating water will help concentrate the wort further than what you can get from mashing. This will help save you on equipment space as you can pull more wort from the same volume using batch-sparge for these high gravity beers. Or if you miss your first runnings target gravity *caugh*.

3. Darker Color - the long boil time helps to create reactions that produce melanoidins as well as further caramelize the wort. The first benefit of these is darkening the wort which is important if the wort is too light when brewing for style guidelines. With the limitations of the challenge here it was almost a necessity.

4. Flavor Changes - the same melanoidins and caramelization that darkens wort also has an impact to flavor. This isn't a major change and the later can easily be replaced by crystal malts. The time required for this process puts this difference at risk if it was the only benefit you were going for. Using it for other purposes, this is all the better for me to (attempt to) win with! 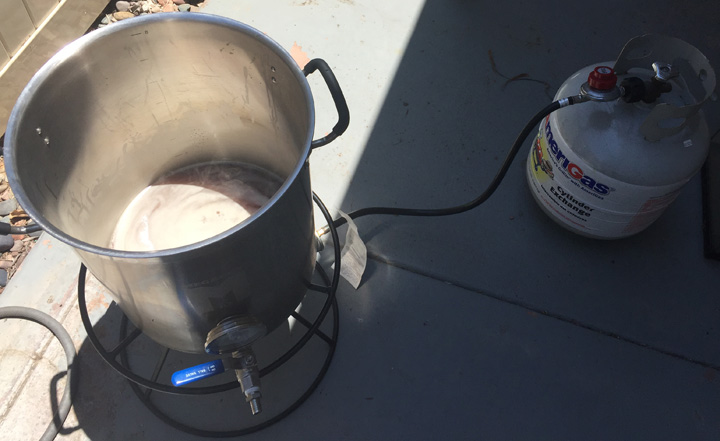 Wort Caramelization, only a short moment's break before back to stirring.

These two techniques are those that have been replaced with modern marvels. Things that will make your brew day faster, easier and taste about the same. Yet these are things I wouldn't dream of removing from my toolbox. The limitations of this contest bring a reminder of times that there wasn't always the wide availability of ingredients we have today. Something that might happen again if there is a shortage on supplies or time to get them. These can also help when things might go wrong on the brew day to make up for the unexpected.

I have to admit that mistakes were made as I was far too adventurous in this brew day. There wasn't anything that would make this a tosser yet changing things on the fly and relaxing with a beer are becoming an art form in itself. My original intention here was to parti-gyle the beer in order to make a lighter one off the high gravity base. Even so I found myself beyond the limits of my gear as both my mash tun and brewing pot were pushed to the edge. Under my gravity for the first runnings and far under volume, I ended up having to pull the second runnings into the first beer instead of a second. The longer boil helped correct this as I managed to hit close to target gravity and the correct volume. There was also a moment where a mad scramble to the store (very close by) to swap out propane. Thankfully it was near the end of the boil so I was able to cap the pot and avoid capturing DMS.

In the end I have a beer to be kegged tonight and will be aging up for the couple months before competition. I have plans to age the beer not reserved for the challenge to age 6-12 months, half of which is going to be sitting in some bourbon soaked oak cubes for the next week. While it is fresh I will be updating the post later with initial impressions. Hopefully this helps you to make something fun for the 2015 BrewUnited Challenge or at the least, inspire you to try these out and avoid my mistakes!

Awesome write up! It's amazing how close our processes ended up being. I also boiled down and caramelized by first wort (reduced it to 1/6th of original volume), and did an extended boil (3 hours). Good luck!

Thanks for sharing your creative process, interesting write up. One bit of advice; I noticed in the photo at the top that your starter had a cap and airlock on the top. You will get more growth and healthier cells by just covering the top loosely with sanitized foil on the stir plate. Yeast need oxygen at this stage to make sterols and unsaturated fatty acids for their cell membranes--which they need in order to grow and divide.