Sorry on the delay for the usual Friday post, but just by the title you can guess just what might have kept me busy this week. About a month ago I got into a group project with other local brewers, mostly with QUAFF members. The lead of the project managed to get ahold of two 55 gallon bourbon barrels that had been used to age Maple Syrup. These are usually reserved for founders of the aging project and so I jumped on this as a rare opportunity. Better yet, we already had the cooperation of a local nanobrewery, Arcana Brewery, to let us use their system and fermenter as it would be quite a bit of work to pull 55 gallons out of homebrew gear. This post is a bit more just documenting what we went through than any particular topic like I usually do.

It's one thing to have a good idea and another to pull it off entirely. We had a good planning session together where we worked out the styles of beers and the recipes to scale up. The initial contenders were Old Ale, Breakfast (Pancake) Pale Ale, Breakfast Stout, and Barleywine. After some heated discussion, we ended up closing it down to the Old Ale for the first barrel which we modified to take Molasses instead of Dark Brown Sugar or Treacle to go with the Maple. The second barrel was going to get a Breakfast Stout where we really hammer in the flavors of chocolate, coffee, maple and bourbon together with the roasted malts.

Recipe planning wasn't too challenging at first, as we simply had to make a 5 gallon recipe to have scaled up. Things to keep of note though is that you need to take into account the brewery's efficiency to get the grain right before you size up. With some experienced members putting heads together it was all the easier to draw it together. Beersmith just cranked everything up to the right size and we had a decent base. At that point it was a matter of adjusting to the hops down 20%-30% due to more efficient utilization in the larger equipment/volumes.

NOTES: Numbers look a little funny because this is adjusted down from the 100 gal recipe.  There brew system was also at a high efficiency of 82% so please adjust the grain bill as needed.  Also, the House Yeast was WLP007, use Yeast that you think would work. After my talk about 15 gallon pots, I feel small...

Things were a little different on this brew day, mostly considering it started with waking at 5am to drive to the location. We had planned for a 6am start time as there was a short heat wave in town and the less time in that the better. Even then we ended up hitting 95F outside and higher inside at some points. Thankfully they had a on-demand filtered hot water system that put out what we needed just a bit above strike temp. We did get a little over at 157F than our target 154F but it still worked out quite well. Mashing in took quite a bit more arm strength as the mash paddle was a big metal oar, a decent workout though. Raking out spent grain, shows you a little bit more in proportion.

Everything else was about standard, fly sparge into the boil kettle and bright up to temp. Just took a bit more time considering it was over 100 gallons instead of the usual 7ish I use pre-boil. Just a simple hop addition at 75 minutes and then we wait till the end. Adding the Molasses was about the same as any sticky syrup addition (honey, maple, etc) where you rinse the container with the wart to get it all out. Only there was two gallons of the stuff to add. 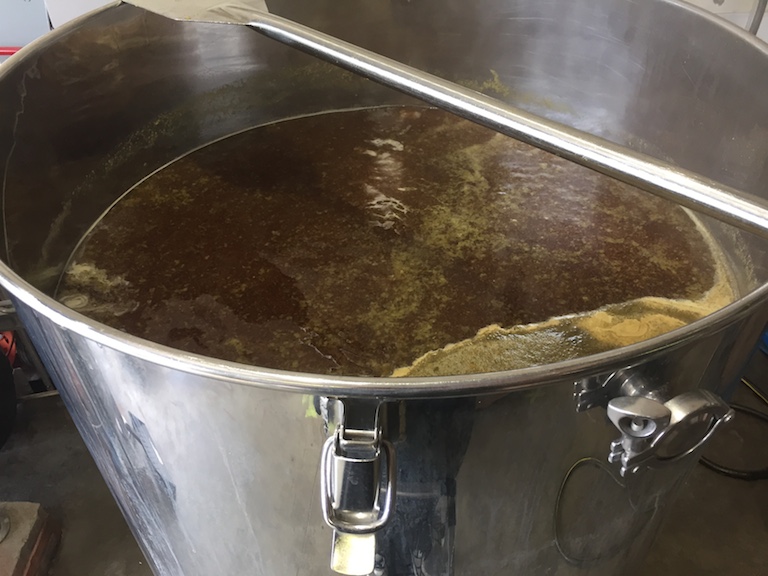 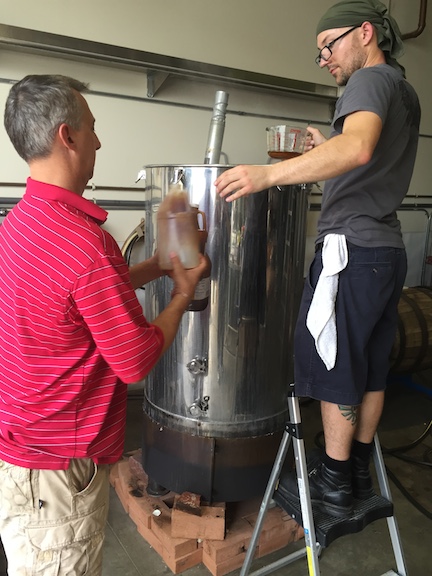 Boiling Wart and adding in the Molasses

If you want to replicate what we are doing on the homebrew scale it can be done with Oak, Bourbon, and Maple Syrup. I recommend getting 2-3oz of Oak Cubes in a 5 gallon batch depending on how much oak flavor you want. Letting them soak in Bourbon, cheap stuff works fine, starting from your brew day. Add 4-8oz of maple in the last week of fermentation, unless you keg which you can add it after cold crashing to preserve some of the sweetness. Then cold crash and transfer to secondary, I just use an empty keg, and let it sit on the Bourbon Oak Cubes for about 7 days. Start tasting it around day 5 and daily there after to know how much oak flavor you want.

The things you don't consider...

Beersmith and proper efficiency planning ended up being spot on for properly scaling the recipe up. We hit within one point of our OG target, hit 1.072 of 1.073 goal. There were a few considerations to think about though as we tried to make it easy by rounding out bags of grain where possible or using specialty grains they already used for recipies. Also that a fresh pitch of yeast costs $150+ so we ended up using the house yeast, WLP007, though for the types of beers we are doing it works out well enough. If we had any special yeast planned there is a step-up method for making a 2L+ starter and then making a non-stir starter in a 6.5gal carboy.

Thankfully we started with the easy one as we are already crossed with another challenge for the Breakfast Stout where the 300lb of grain is going to push the 3BBL system to it's limits. We might need to sacrifice either volume or take the time to do two mashes by splitting the grain bill. Then comes the challenge of the raw amount of 'spice' additions we are adding in with Coffee and Chocolate in the boil with more Coffee and Vanilla in secondary. The issue we have to avoid is over spicing so that it can pick up enough flavors from the barrel. With one-shot at the goal, we will likely hold back about 15% of the spices and add them in the fermenter if we find it needs more.

That all said, it was a great learning experience and I can't wait to taste the results. I will get about 5 gallons of non-aged beer and 5 gallons of the barrel aged beer for each batch. For once I am actually hesitant of sharing beer with other people, the usual joy of brewing for me. Next Friday I will get up my usual post with the next installment of A Dark Journey through Hefeweizen, Open Fermentation!

This sounds delicious, can't wait to hear how it turns out!

> If we had any special yeast planned there is a step-up method for making a 2L+ starter and then making a non-stir starter in a 6.5gal carboy.

Ha, I used to user a starter to make a batch to then use that as the starter for large batches. Works out well. Seems weird to make a batch, for a batch.

Looks like you had a lot of fun on that system. Excited to see a follow up with the results! Cheers!