Bringing Yeast Back from the Dead

The purpose of my last brewday was to put together my Christmas beer for this year. I'm lucky enough to be part of an email list containing some knowledgeable, accomplished brewers, and this year, we're all brewing up an assortment of Christmas beers for a swap. I'm excited to be a part of this, but I'm also a bit nervous, as I want to be sure that my offering is respectable.

My entry was supposed to be a big, caramel-heavy brew, so I put together a recipe that aligns pretty closely with an English old ale. Maris Otter, some layered British Crystal malts, a little honey malt (because that stuff is amazing), Target hops, a little table sugar to dry things out, and my favorite dry English yeast - WLP037 (Yorkshire Square Ale). I planned to reduce some of my first runnings to syrup, maybe employ a longer boil - all in all, I wanted this beer to be an absolute caramel bomb.

WLP037 is a Platinum offering from White Labs that is apparently a bit divisive; people seem to either love it or hate it, as the yeast has a touch of a Belgian like character to it. Sadly, it appears that I am in the minority "love" camp, as last year, White Labs elected to not sell the yeast... and it looks like they made the same choice this year; I suspect that they may never sell it again. Fortunately, I keep a culture of this yeast on hand, so I figured that, for the Christmas beer, I would simply spin up a starter of it, then use my yeast harvesting method (inspired by the famous Brulosopher) to save some for my next brew.

A few days before I was to brew, I pulled my starter gear up out of the basement, when I made a sinking discovery - I had forgotten that I had lost a nice chunk of my yeast back in the spring due to a power outage compounded with some stupidity on my part. Fortunately, my good friend Greg had been kind enough to hook me up with some WLP037 that I had kept in reserve. No problem, I would just use his vial...

It was then that it hit me - I had somehow neglected to refresh this vial, which was dated 10/16/2014. In other words, the yeast was nearly eleven months old, with undoubtedly low viability. In fact, by spitballing the amount of yeast in my vial and using the BrewUnited Yeast Starter Calculator, I guesstimated that I had no more than five billion live cells - if that - remaining. Considering that I was planning to brew seven gallons of 1.076 wort - as well as harvest roughly a hundred billion cells for future beers - I was going to need somewhere in the neighborhood of four hundred sixty-six billion cells. And I was starting with five billion... or less.

A wiser brewer might have scrapped the yeast at this point, and sensibly subbed in another dry English yeast, such as WLP007. I hated to give up on this beloved yeast, though; instead, I decided to do my best to bring this yeast back from the dead. At worst, I would waste a little DME and some time, right?

For the first step, I decided to baby the few remaining cells I had on hand by making a weak, half liter starter of 1.020 gravity. On the advice of one of the aforementioned brewing buddies (thanks, Ray!), I added a couple of hop pellets to hopefully help discourage any possible contamination by other microbes while my yeast struggled to get a foothold. Opening the vial was encouraging, as it did at least smell normal; I added a small amount of yeast nutrient and hoped for the best.

The next morning, I had a very encouraging sign - namely, a weak krausen. Was it possible that this might work? 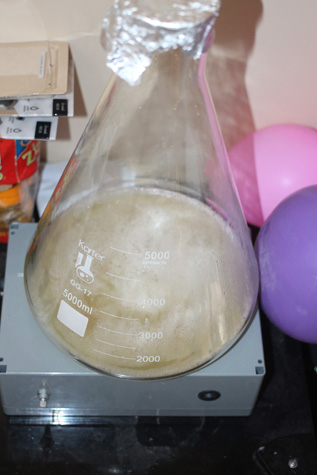 So far, so good! (image links to my excellent, affordable 5 liter flask)

That night, I made a liter of normal gravity (i.e. 1.037) starter wort and added it to my flask along with a bit more yeast nutrient. Once again, it made a krausen - albeit a small one - in fairly short order, confirming that I definitely had some viability. In fact, the following morning, things were looking pretty normal. 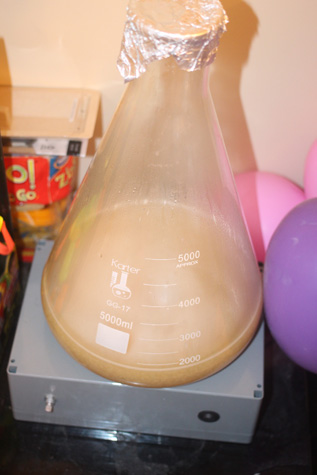 Looks like a normal starter. (image links to my excellent, affordable 5l flask)

That night, I continued to follow the starter calculator's recommendation, and added 2.5 liters of normal gravity starter (and again, I added an appropriate amount of yeast nutrient). As for results, well...

Sure enough, the next day, I had a veritable storm of yeast in my flask. Success!

I did let the starter run to completion... a state that is pretty easy to determine when using a highly flocculant English yeast like this. Check out the big chunks.

An hour or so after stopping the stirring, I had a solid layer of yeast. By the next day, I had a layer of "yeast concrete". I harvested a nice vial of yeast (these soda bottle preforms make superb yeast storage vials) for next time, then proceeded to aerate my wort with O2 and pitch the yeast. And happily, within hours of pitching, I had visible active fermentation in my beer.

This time, I'll be sure to take care of the yeast, to refresh it via starter every so often if I'm not planning to otherwise use it.

Yup, that thing (the yeast cake, what else would anyone think about in that video) got bigger :-)

Am I the only one who played the second video a few times to try and recognize what was playing in the background?

Heh, I have had a wild yeast cake in a jar in my fridge for about three years now with no feedings or refreshes or whatever. A couple weeks ago I just took about a tablespoon of the cake out and tossed it into a starter and it was fermenting within a day or so. Like on most perishables, expiration dates on yeast are also probably BS to make you buy more.

My only concern would be if the yeast are overly stressed due to long "hibernation" it would be interesting to see if it was comparable to fresh yeast as far as any off flavors that may be present! Great article!

Excellent write up, just one question. How do you ensure you have enough yeast in your soda preform vial? Also, how do you transfer from flask to vial?