Oktoberfest. The mere word conjures up visions of oompah bands, lederhosen, autumn fare, but most of all - BEER. Not just any beer though, festbier. An elusive beer style, tough to find in the states in the fall, impossible to find any other season. I write this as the 2015 Munich Oktoberfest is just wrapping up. I'm sure work is underway to take down the tents already, as the scent of roasted nuts and steckerlfisch still hangs in the air. The passing of Oktoberfest generally means that finding (fresh) examples of this beer will slowly start to be impossible.
I've been fortunate enough to attend a few of the fests over the last decade - a trip well worth the price of the admission just for the beer. What many don't realize is that at Oktoberfest, you are limited to the "Big Six" Breweries - Augustiner, Hacker Pschorr, Hofbrau, Lowenbrau, Paulaner, and Spaten. Each tent serves one of these beers, made by breweries within the city limits of Munich. All of the beers are similar style, but different in their own ways. I've argued over the beers, on which is the best. Everyone has an opinion. I've had a festbier or two from other breweries - Weihenstephan comes to mind - that make excellent examples of the style, the Six are traditional though. 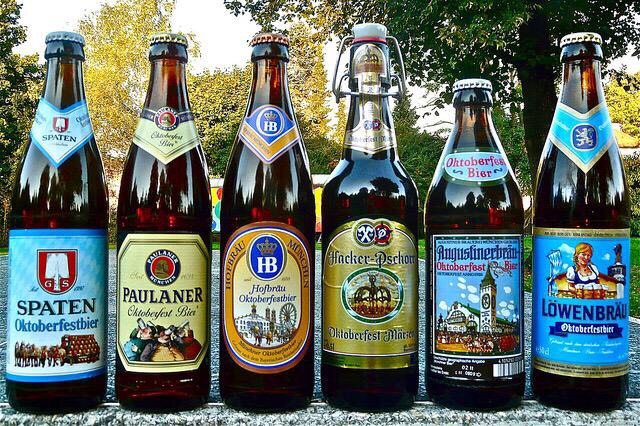 The Big Six
This year I had to stay home, but my usual group of friends - they've been going every year since 2004 - were "kind" enough to share pictures of their merriment. I love those guys, but they kill me, knowing I can't get this beer here. 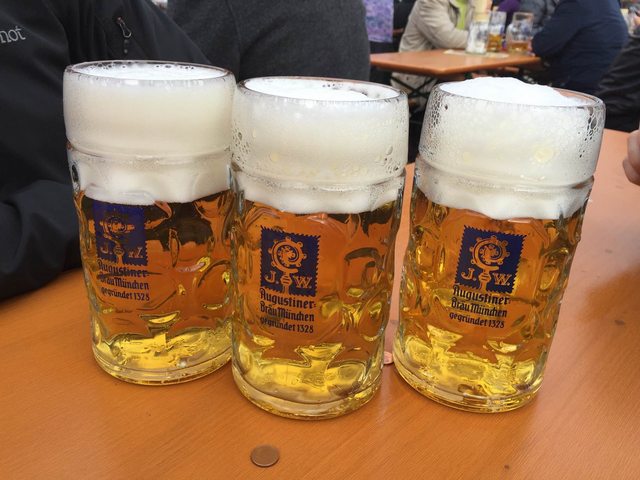 Augustiner - My favorite
I have cruel friends
As you can see, this is a light (in color) beer - lighter than most imagine the beer to be I suspect. Make no mistake though, this is not an American light lager. This is a flavorful, very malt forward beer. Shocking how flavorful this beer is. I could see a beer drinker tasting this for the first time and be blown away by the depth of flavor of this beer - I was that guy.
The problem I've discovered with this beer is that it does not travel well. If you try a bottle and think to yourself "ugh, this is awful", you most likely found a bad bottle. If one tries a good example of a festbier, at WORST they may say "Yeah, that's pretty good." The proper response is "WOW" if you were wondering.
In my state of residence, I haven't seen all 6 of the "traditional" examples, but the 3 that I can easily find (Hofbrau, Spaten, and Paulaner) are very hit or miss on how they stack up to their Munich counterparts. Hofbrau has been the most consistent, but even occasionally is just not a good beer due to rough handling. Spaten - I contend at least - is a totally different beer than what you get in the tents. It's darker, not as subtle, still decent but definitely different. So try the bottled versions with a bit of skepticism.
So, what's a person to do about this lack of availability and lack of consistency on handling, and still be able to taste a true festbier? Brew it yourself! This is a beer that I've tried to emulate since tasting it on my first trip in 2006. I consider myself a pretty decent lager brewer, but this beer, this is my white whale. If you can brew a decent Munich helles, this one isn't beyond the realm of possibility for you. Based on color and flavor, the grist consists of mainly continental pilsner malt - I don't think American two row or even American pils is flavorful enough.
My first attempt at this beer was extremely off the mark - I made more of what I consider an "American Octoberfest", in the vein of Sam Adams - still a good beer, but definitely not a festbier. This first attempt was a split of Vienna and Munich, with some German Caramunich. Definitely an amber beer. Apparently I didn't learn my lesson, as the second attempt was pretty much more of the same - I backed off the cara malts a bit, but still ended up with the amber beer (again - pretty tasty, but NOT a festbier).
I finally got wise and did some digging online and asked around about authentic examples and recipes and....came up with a whole lot of nothing. Not much was posted back in 2006/2007 on this beer that I could find. I could find a few folks that were familiar and they at least pointed me in the direction of pilsner malt instead of the Munich/Vienna. My third attempt was 50/50 pilsner and 10L Munich for an OG of 1.060. Still too dark but at least I was closer. Dropping the cara malts too, allowed me to get this a bit drier than the previous attempts. 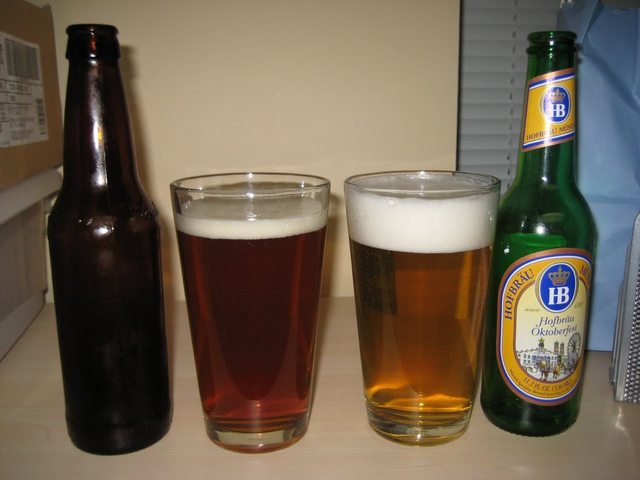 Third Attempt - Still fairly amber, especially compared to Hofbrau
My fourth through....bah, too many, have been slight variations of the pilsner/Munich grain bill, leaning heavily toward the pilsner malt. As far as the Munich malt - less than 20%, but closer to 10%. The beer is generally fairly dry. For "science", I degassed a sample of Hofbrau, it read 1.010 - hard to believe that a beer this flavorful is that dry. 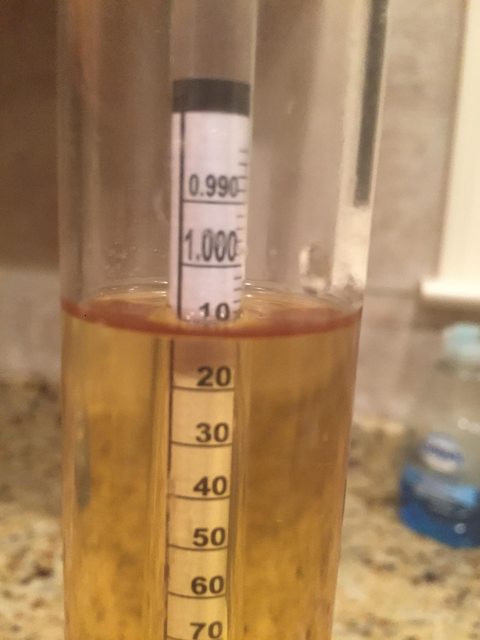 Hofbrau Gravity Sample - I still drank it
Most festbiers are around 6.0%, some slightly higher, some slightly lower. I shoot for an OG of about 1.060 and a FG of 1.010. Any bigger and you enter into the Maibock category, any smaller and you end up with a maltier helles. Hop rate is very low, on par with a helles. I try to hit around 20 IBU - and all bittering. Using a clean German bittering hop like Magnum is perfect. Pitch an appropriate amount of yeast, and pitch cold. I personally prefer WLP833 for all of my lagers, just because I'm familiar with the results and behavior. I'm of the opinion that lager yeast choice isn't as crucial as other yeast because you aren't expecting as much flavor addition from it.
My latest iteration of this recipe is 90% Weyermann Pilsner and 10% Weyermann Munich I (their lighter Munich, about 6L). I have given up on cara malts for this beer - I don't think they're appropriate for German lagers anyway. I shoot for the above gravities and IBUs with Magnum. Pay attention to your water, distilled with a little calcium chloride and either a bit of acid malt or acid addition to the mash to get in the proper mash pH. This recipe will get you close, a festbier that you'll find incredibly drinkable. I find though, that it's still not 100% authentic. It may be that I'm missing an ingredient, it may be that I'm missing the Oktoberfest atmosphere. I'll keep searching for the perfect recipe, and take the occasional trip to get a fresh example. For science.
PROST!

I'm sure the atmosphere has something to do with it. Maybe you should put on your Lederhosen when tasting this beer.

Have you tried decocting this?

I haven't tried decocting this lately. I've been doing a few bocks and Dunkels that way lately maybe I should retry it by decocting. My thing is though, these beers are made by the big breweries on their usual system. I don't think they decoct some and not others. Decocting on the homebrew level is easy enough though.

Well, the BJCP recognizes in the 2015 Guidelines that there are two types of Oktoberfest bier, right?

There is the export Oktoberfest that most closely resembles Marzen, and which the BJCP calls "Marzen". It is maltier and darker than the other beer.

And then there is the increasingly pale bier served in the ber tents in Munich per German consumers' tastes, and the BJCP calls this Festbier.

Even putting aside abusive handlnig, I don't think we can take any bottle available in stores in the U.S. and make a comparison to what is available in the tents in Munich.