I have been working on a base milk stout recipe that I wanted to use with seasonal flavors. The sweeter base makes for a bed to help out any spice or flavor additions as some can be harsh on their own or seem lacking without the sweetness that gets fermented out. With the holidays coming up and competitions to match it came time to put it to the test. I wanted to avoid pumpkin due to it's popularity and prevalence that wouldn't shine in a competition lineup. Apple Pie is handled better in ciders, Anise Cookies (a family tradition) is a bit too rare for people to understand...but what about Gingerbread? 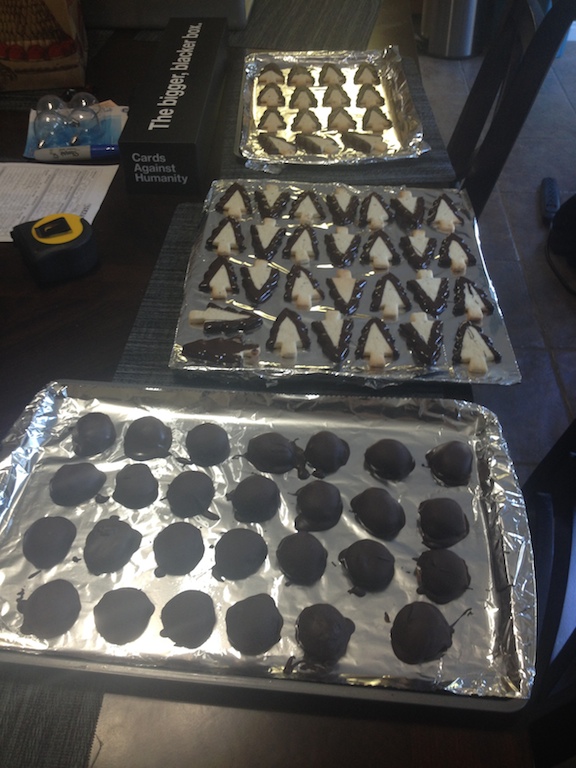 Note: This recipe is over complicated right now and I am working to simplify it. Still, it tastes amazing so it has been worth the trouble.

For brewing it was quite a standard session, high temperature mash at 156F to have the thicker body for this beer. The only extra prep was grating the ginger before it was going to be added to the boil. For this, it's a good idea to get more ginger than you need so you have a nice stub to hold onto. A proper zester to use helps too but a normal grater can work. You can then measure out the amount of grated ginger to add.

Edit: Boil time is 60minutes and this is fermented at 66F for about 3 weeks.

I find that when trying out a new flavored and/or spiced recipe is getting the seasonings right. For each type of addition your adding more complexity to the mix which make it harder to find the right balance and that is on top of trying to maintain the flavor of the base beer. As with any seasoning, you can't remove it once it's in so start small. You can add more to the beer in last week of fermentation or even use Extract or make an Infusion to add at bottling time. In the case of this beer, I didn't get as much cinnamon as I wanted in the beer and far from the right Vanilla. Unfortunately I did not prepare ahead of time for this and only had Vanilla Extract to adjust the flavors.

So, if it's your first time doing a flavored beer it's good to make an Infusion early enough to be ready for bottling. It's simple enough to make as you get a clear grain alcohol, it doesn't have to be a good one, a mason jar and your spice(s). In this case I would make an infusion for each spice as it's the blend I am unsure of. If you knew what blend to have but not the amount, you can just make the blend in one infusion. The alcohol will sanitize as well as draw out the flavors you want from the spices you have.

To use the infusion, spices are nice enough to scale up 1 to 1. Set out a set of 5 or 6 shot glasses and preferably ones with fill lines but the normal US size is 1.5 fl oz. Either fill your beer to the line, measure out the 1.5oz, or wing it assuming the shot size (shh it's totally scientific). Then take a dropper and add drops of your infusion to the glasses, incrementing drops in each one. It's all down to taste at that point, try them out. Have someone else double check just which of the set is the right amount helps too. At that point it's just a matter of math. Find out how many drops of water fill a 1/4 teaspoon, scale up the amount of drops per 1.5oz to drops (1/4 teaspoons) to 5 gallons. Which comes out to about 85 times the drops used...85 and a third to be exact.

The base beer was always quite a nice smooth sweet stout as I am not the biggest fan of the dry heavy stouts. It was a compromise as my room/brewmate loves those beers. But that sweetness was perfect when going to an almost desert beer. The ginger is strong yet the vanilla and creaminess from high body and flaked adjuncts really make it well balanced. Though it was noted that there needed a bit more roast malts to balance out a little more to make the base beer shine through. The surprising thing though was just how damn tasty the head was. I purposefully high carb'd the beer to make it all the more creamy but this was just amazing. Something I will definitely be making again, maybe even before the year is out if I have time.

I actually submitted this beer to a few competitions, results are still pending for most. The one that did come in just made my month as I had been sick the previous week missing out on a planned big trip over the weekend. While not quite 'professional' of a review, it always is gratifying to get such a strong good response. I have posted the images below for you to read of both judge's reviews.

Next Time will be a post on making a Citrus IPA with no Citrus and only a 45 minute boil! Also known as Blasphemy in San Diego but I like brewing dangerously. 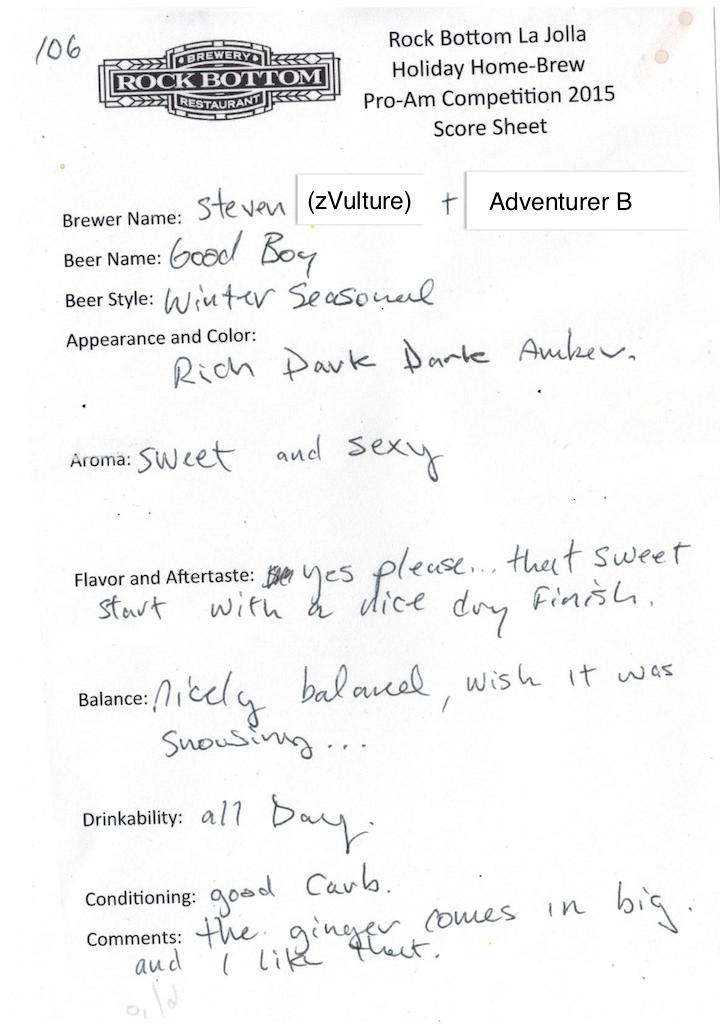 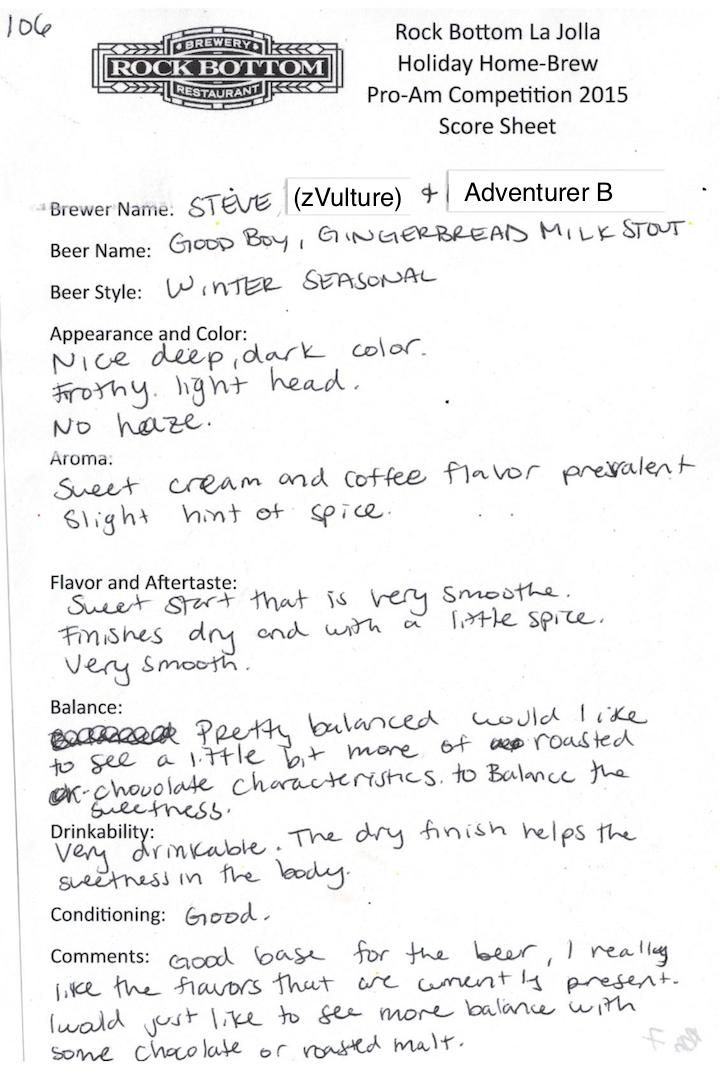