While I have covered the first of the barrel aged beers, the Old Ale, the keg finally arrived for the Breakfast Stout! For those that are reading this series for the first time, a bunch of local homebrewers got together on a group buy of Bourbon Barrels that were used to age maple syrup. These were then used of course to age beer which we brewed at Arcana Brewing on their 3bbl system. Compared to the first recipe, this was quite a bit more involved as it we wanted to clone Founder's Breakfast Stout. Thankfully the recipe was given by the brewery and printed in Zymergy Magazine (seen below). Unlike my usual recipe postings, I will just include this snippet as we only made minor adjustments (also listed below). 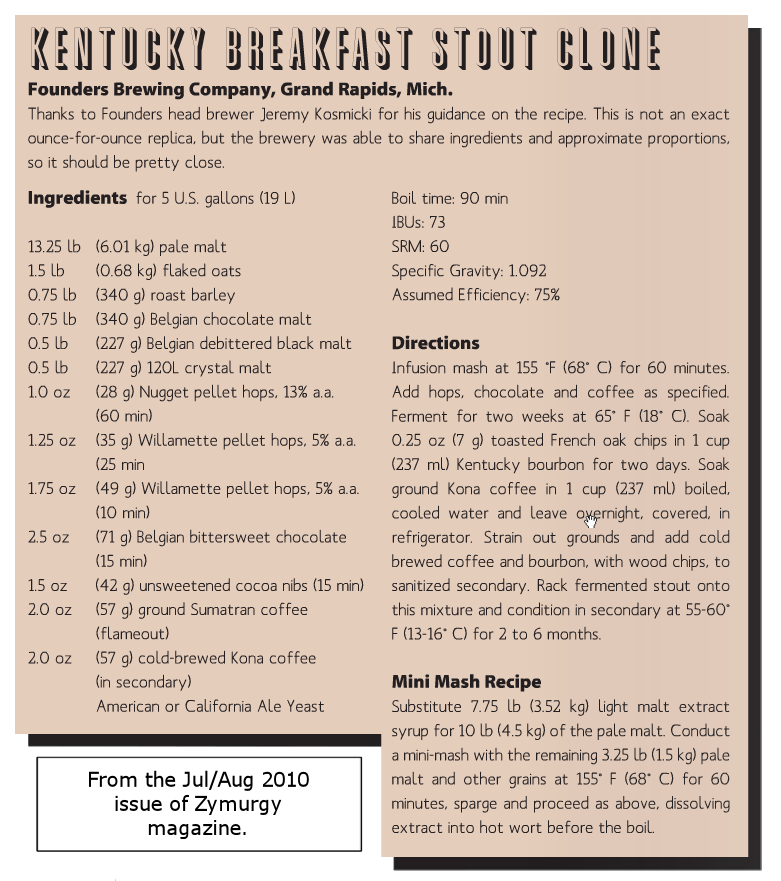 The minor changes to the recipe were regarding the roasted malts and coffee additions. While the value was the same, the de-bittered and chocolate malts were more what the brewery had available as we didn't want to buy a 55lb bag of each. Also the coffee used was from a local roaster so that will change the flavor depending on your preference.

First, I admit I am not a bit stout fan. Though it is something my roommate loves to no end so there is always too much of it at home. His words being "It needs to be so dark and dense you can't see through it with a light. And I want to be able to CHEW on it." That last bit an exaggeration but you get the idea. That would be a good start to describing this beer with the heavy load of flaked oats, heavy roasted malts only to be further bolstered by bitter hops, raw cocoa and earthy coffee it just was so damn thick in the mouth. Yet the vanilla, while barely detectable, and the use of cold brewed coffee helped keep it from being overpowering. There just was too many individual flavors that none would overpower yet each contributed together. I had to admit that this, while I couldn't drink more than a taster at a time, was damn good. The aging I had done while I had been moving only helped mellow and blend it all together. But just was there any room for the barrel in this beer?

Now barrel aged stouts I can get behind, they generally help sweeten the beer up just enough that it becomes quite a bit more drinkable for me. I was quite interested yet couldn't imagine what the stout would turn out as. The aroma was quite clearly that of a beer that had seen some level of bourbon in it. It cut out any of the more subtle roast that even my horrible sense of smell might have gotten. The taste though was quite surprising though as all those bitter roasted notes that had been so cloying before were subdued a lot more than I expected. It was still there beneath the flavor I expect from bourbon barrel aged beers and quite enjoyable. Though with it's unknown higher alcohol content it was definitely still a sipping beer. Yet compared to the old ale, any of that maple was completely lost beneath the complexities of the flavors. One of my more amusing comments on club mates tasting it was "Tastes almost like a rum and coke" which I can see where there were similarities. The maple must have fermented out to a more rum like addition to the beer which the bourbon and oak would only enhance. Overall, I think this is a great beer but I think it would have been just the same in a normal bourbon barrel.

In other notes, I managed to get a hold of some Canadian 100% rye whiskey aged in white oak barrels for three years and then blended with Canadian maple syrup. It is damn tasty alone though right now I have a bit of it in some oak cubes. I am going to try putting that in the un-barrel aged old ale and report back later. Next week though, it's going to be all about the next Odd Beer: Mountain Dew Pale Ale.