Last year, I brewed a caramel malt heavy old ale for a Christmas beer exchange. The idea was to just blow up the caramel aspect of this beer - over twenty percent of my grain bill (nearly four total pounds) came from British crystal malt, and I reduced about six quarts of my first runnings to about a quart of syrup.

Sadly, it didn't turn out quite like I had imagined, largely because my yeast (WLP037 that I had re-harvested several times over) drifted on me quite a bit. Rather than acting like a dry English yeast, it presented more as a phenolic-heavy Belgian strain (albeit still super dry - my FG was 1.009, from an OG of 1.076). The beer wasn't bad, just not what I had in mind.

The exchange went well, my beer was received reasonably well (missed target or not); all in all, it was a fairly unremarkable story. However, this beer did spawn a couple of experiments, once of which promoted today's blog post.

You see, as I was planning this beer, my non-beer drinking wife decided to get involved. She was thumbing through a homebrewing catalog, and discovered the various flavoring extracts one could buy. She has steadfastly refused to ever even sample my beers, but she decided that day that a caramel/vanilla/hazelnut beer might be delicious. As is the case with many homebrewers, I keep hoping to share my passion with my spouse... so if she was interested in what seemed to me to be an outrageous flavor combination, who was I to argue? I was more than happy to give it a shot.

I split a gallon of this beer off, to which I had added some homemade vanilla extract (vodka plus fresh vanilla beans - it smelled like Heaven and the kids loved helping with it). I then split off a second gallon to which I added the above vanilla, as well as some hazelnut liquor/extract from the local homebrew shop. I will fully admit that I had no real idea what I was doing; at bottling time, I added vanilla directly to the bottling bucket until I felt the taste level was right, then did the same with the hazelnut.

Around Christmastime, I had tried a couple of bottles of the vanilla-only variety, but they were rather hot; I hoped that some time would let them mellow a bit. The last thing that I wanted to do was present my wife with a bottle of beer laced with rocket fuel, so I let them age for several months before trying another one. I had a vanilla-only back in the spring, and it was better (though still a bit hot), so I decided to wait a while and try again. This weekend, I finally cracked open a bottle of the vanilla/hazelnut variety.

Even after some nine months in the bottle, I had no gushing - yay me. At least I finally got those issues handled for good.

Appearance was a nicely clear mahogany with attractive ruby highlights when held up to the light; I got a good two fingers of dark tan foam, but that didn't hang around super long. 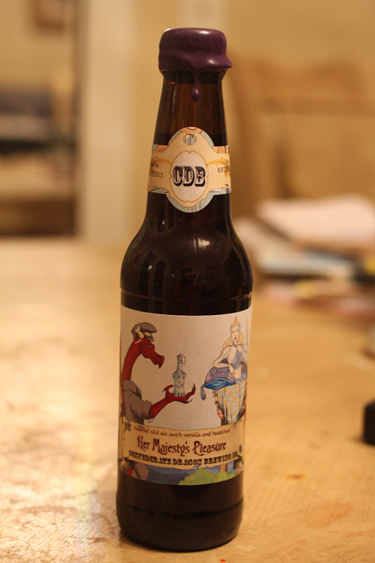 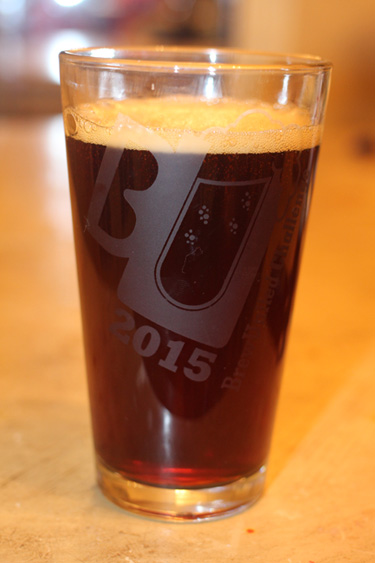 Aroma was strong vanilla, with quite a fair amount of caramel. I detected no hops at all (which is what I expected).

Flavor? Wow. There was so much going on here. Big vanilla dominated up front, along with nice caramel, as well as a little... leather? Some serious Belgian-y phenolics really filled things in. The hazelnut was very, very reserved (I had certainly hoped for more of it). At first, I was very unsure that I would enjoy this at all - it seemed almost chaotic in flavor - but as I drank more, it really grew on me.

Despite the crazy low FG, there is tons and tons of body on this one; it's thick, almost sticky. Carbonation level is pretty nice, even with the lack of persistent head.

My wife tried it, making a terrible face at the aroma. She couldn't pick up the vanilla (which I thought was dominant), instead informing me that she just smelled beer.

Her first taste was less than encouraging. She made an even worse face and proclaimed that "she would rather lick a cat's ass than drink this".

To her credit, she did give it a couple more tries, and decided that the flavor wasn't bad after all - but that it was way too thick for her palate, that it just "hung around forever after the sip".

Considering that I made this funky variation in the first place specifically for her, I'd have to chalk this up as a massive failure. Then again, a big, complex Old Ale/funky Belgian-y beer isn't likely a good choice for a non beer drinker. All told, I'm enjoying sipping on it, so all is certainly not lost. I'll likely leave the rest alone until the weather gets cooler, though; this beer isn't a great fit for Alabama's summertime temperatures that sit around the mid to upper nineties F with three hundred percent humidity.

As with the base beer, if I had one change I could make, it would be to use a more traditional English yeast. I prefer my Belgian yeasts to be fruity and/or spicy, not generically phenolic, and I get too much of that here. That said, it's not a bad beer by any stretch of the imagination.

I wanted to take a quick moment to encourage everyone to check out the awesome giveaway going on right now at Brulosophy. There are some great prizes being given away - be sure to go and enter for a chance at some of them!

Finally, don't forget that the 2016 BrewUnited Challenge is filling up quickly. As of this post, we have over $6100 worth of prizes to give away, but spots are literally filling up about twice as fast as they did in 2015. Right now, fewer than forty percent of the spots are still available - and the SMaSH category is down to fewer than ten slots left! The beer doesn't have to be in our judges' hands until October, so you have plenty of time to brew... but if you want to enter, you need to do so soon!