I thoroughly enjoyed the first BrewUnited challenge, so I was happy to see there was 2016 edition and joined almost right away! I quickly picked what style I was going to brew in each category, though the one I was most excited about was the SMaSH as it restricted options even more and would force me to try new-to-me methods to brew something resembling a Strong Bitter.

Disclaimer: I don't pretend to brew well, my goal is to have fun brewing something I would like and learn a few thing along the way.

The Ingredients:
I wanted to use a base malt I already had (or was going to have for one of the other BU entries); the ones that would probably fit the bill flavor-wise would be Maris Otter and Golden Promise, but color-wise Vienna and Munich II would be a lot more practical. I went with Maris Otter - color be damned, this one tastes best.

Regarding hops, I thought of going either with the familiar Fuggles or East Kent Goldings, but I had a 1oz bag of UK Progress that was pleading to be used; since my batches are usually 1.75 gallons for 2 gallon buckets these days, 1oz would do (barely - this would become an issue).

While I do have a stir plate and have used liquid yeast a few times, I like dry yeast because I'm lazy. Until recently for any English-type beer I would simply have gone with the predictable S-04, but recently I've been giving Danstar Windsor a shot and have been happy with it. Windsor it is, then.

Mash & Boil
If all I did now is do a typical mash and boil, I get something pretty close to a British Golden Ale - not what I want. I could lightly toast that Maris Otter to change the color and flavor profile, but since I would have to use only MO processed that way, I was concerned about loss of diastatic power (Crisp MO doesn't have a whole lot at 50° Lintner, barely above self-converting). Not only that, it could be kind of a one-note beer as I interpreted the processing rules regarding toasting as all grain being toasted at roughly the same level - I wanted a bit more complexity than that method could provide by itself. Toasting was out for those two reasons.

Something else I did for the first time was an evening mash and a morning boil. Prepped in the afternoon, mashed that Saturday night - two-vessel Brew-in-a-Bag, one kettle for the mash, a second one for dunk sparging. With mighty squeezing efforts, my efficiency is 80-82% for all my batches*. After pouring the sparge wort in the main kettle, I covered it and brought the temperature to ~180F for 10 minutes to pasteurize, turned off the heat and went to bed.

*I may go single vessel again and live with 70-75% efficiency to save time and effort - not doing it now as it would take a few batches to dial in that change of process.

Next morning, I fell back on a method I've used in the past - long boils. The Porter I brewed for the 2015 challenge was interesting to make in many ways, for example by using a longer boil (190 minutes) to try to bump the SRM up a bit. For this SMaSH I used the same idea, but using multiple steps: 1/3 of the wort would be boiled for 5 hours, 1/3 for 2.5 hours and 1/3 for ~70 minutes, adding water whenever needed along the way. I figured that the 5 hours and 2.5 hours worts would gain color and flavor from Maillard reactions, meaning (hopefully) some additional complexity as each third would contribute slightly different flavors. Note that all of them were boiled in the main kettle; at first I simply poured two-thirds in another kettle (reheated to ~180F, just in case) and boiled the first one for 2.5 hours, added the second third at that point and the last one with a bit more than 70 minutes left.

I probably should explain this one.

At HomebrewCon 2016, there was a seminar called "How Cold Steeping Malt Can Elevate Your Beer", which the speaker then renamed "Cold Mashing", as some conversion did happen. His findings were that if you cold mashed base malt, you extract all the color and flavor and about 1/4 of the sugars* you would in a regular hot mash, with the possible result of, for example, brewing a low ABV but flavorful beer. It also meant you could add quite a bit of color using the same base malt without bumping that ABV too much. Another bonus is that it could contribute different flavors as well.

*Uncertain about this now, though maybe he meant fermentable sugars. Will need to watch/listen to the seminar again on the AHA's website.

Based on what I learned, I decided to cold mash 1lbs of MO; my containers were smaller than I wanted so I split the process in two - cold mashed in a sanitized* nylon bag in a pitcher for 6 hours, poured the wort in another container (squeezing the bag hard), then dunked the grain in water again for another 6 hours. In all, I collected 3qts of wort this way.

*Not sure if sanitizing is all that useful here, malt isn't exactly sterile. Maybe I should cold mash in the fridge to slow down whatever might grow in there. Another idea would be to use hops in the cold mash water as an antibacterial agent - /u/Stuper5 gave me an interesting suggestion of adding boiled hops as they would be more effective in that role. I may do this for my next cold mashed beer.

Once the rest of the additions were done and the wort cooled, I took a small sample, put it aside, then filled my fermentor, pitched yeast and CF, put in fermentation chamber and started to clean. That's when I remembered I should check that sample.

So, either I got a whopping +90% efficiency or I underestimated what the cold mash would contribute - the latter seems more likely. Maris Otter has a gravity of about 1.038 and I expected it to be much lower mashed cool, but playing around with numbers I found that it probably only dipped to 1.028, far higher than my first guesstimate*. Also, the beer was paler than I had hoped.

I could just relax and let yeast do its thing, but I wanted this beer to at least be in the ballpark of my target. Diluting with water wasn't really an option, as it would tone down flavors and aroma too much. I started to check if I could just brew a smaller version (in size and gravity) to blend it with. The next day I began to write a recipe with MO/Progress, then called a couple of LHBS to see if they had UK Progress in stock.

Oops #2
They did not. Online homebrew store to the rescue.

UPS tracking showed me the hops would be delivered a few days later on a Friday afternoon, so Friday morning I put 0.6lbs of MO in a nylon bag again and dunked it in a pot with a little above 2qt of water, where it would stay for about 12 hours. That evening, after I poured the wort in my boil kettle, I would raise the temperature to ~150F for about 30 minutes, just to encourage conversion a bit more. After that, I added enough water to account for boil-off losses then boiled for 4 hours - which should make the blended beer a bit darker than the original. Batch volume is a bit over 2 quarts and OG is 1.027 (exactly the number I expected when I plugged in 1.028 for cold mashed  MO), the smallest batch I ever brewed for both meanings of small. Same yeast and other additives were used.

Here are the two beers in an easier to read format:

Blended at bottling with the other one after both reach FG, this is what I should get:

The blended beer would be equivalent to a single beer with 1.057 OG. Assuming I mathed correctly. I'm not good at mathing.

This is where my beer is right now; I will be blending the two next weekend and hopefully the end result will be pleasant and maybe even reminiscent of a Strong Bitter. Regardless, making this beer has been my least boring brewing experience.

-- Extra Innings --
Flour Power
Since cold mashing extracts less sugars than a regular mash, I felt it would be interesting to use the spent grain to make barley flour and incorporate it the next time I make waffles or pancakes, giving them extra sweetness. 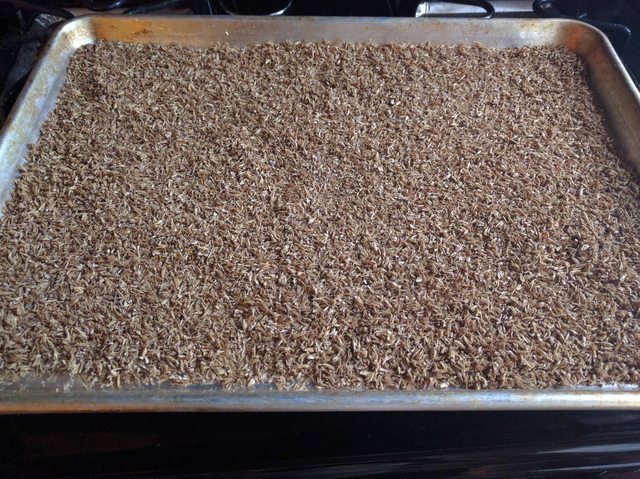 Milling away with my KitchenAid grain mill, making flour on purpose: 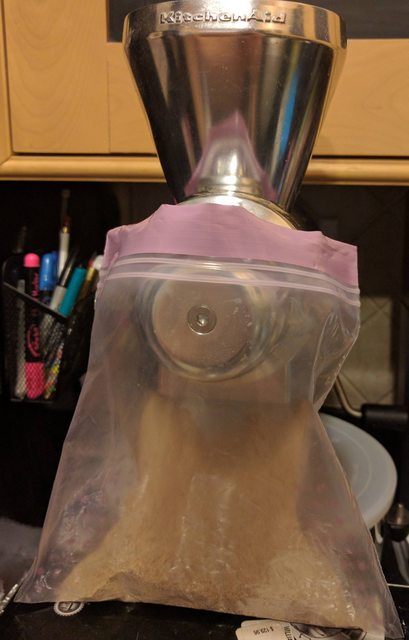 Waffles made with spent grain flour and mixed with all purpose flour were quite good. So is the beer, though calling it a Strong Bitter is a stretch - color turned out paler than I had hoped and taste isn't quite right, but it's not bad at all. Still, way too much effort to brew again the same way even though it was fun.