How is the Oktoberfest? Honestly, it's Excellent!

Way back in the summer of 2013, I started formulating my very first lager recipe - an Oktoberfest.  I find the style to be really interesting, as there is a really wide range for interpretation in it.

I did a lot of homework, took input from the /r/homebrewing and homebrewtalk.com communities, researched well-reviewed Oktoberfest recipes online, and spent a lot of time with Designing Great Beers by Ray Daniels.  I have of course tried quite a few commercial versions of the style, as well.

I decided that I wanted the recipe itself to be pretty authentic in ingredients, though I did allow that I liked the American interpretations of the style, such as the Samuel Adams version.  I chose to not go the decoction mash route, as I didn't want to bite off too much with my first lager - instead, I would use a little melanoiden malt to round things out a bit.

I wanted a big, malty Oktoberfest - I actually ended up exceeding the posted upper gravity limit for the style, according to the BJCP - although it should be noted that, historically, Oktoberfest beers were actually higher in gravity (and darker in color) than today's interpretations.  Likewise, I decided to make my beer on the darker end, and as red as I could make it (just because).  While I do enjoy the Sam Adams version, I didn't want my beer to be quite as sweet as that.

The recipe got revised quite a few times, but finally, I settled on a version and went with it.

I decided to go with WLP820 (Oktoberfest/Marzen lager yeast), and made a huge (4.5 liter) starter for it.  On starter day, I realized that I didn't have any yeast nutrient, but the internet suggested that a portion of a ground up multivitamin would work, so that's what I did.

Brew day itself (8/25/2013) went swimmingly; I hit both my volume and my target gravity of 1.065 on the nose.  Late August Alabama ground water is not very cold, so I was only able to get the wort down to around 80 degrees F or so with my immersion chiller; it went into my fermentation chamber overnight, and I pitched yeast the next morning with the beer at 54 degrees F.  The beer fermented for six days at 50 degrees F, and when I checked my gravity, I was already at 1.020 - expected terminal gravity was only 1.016.  I let the beer free rise to the mid sixties, then let it do a diacetyl rest for five days.

At that point, I dropped the temp to 33 degrees F, and lagering began.  I had originally intended to lager until late November, then bottle, with an eye on the beer being ready around Christmas.  Well, life got in the way - first was our Disney trip in mid November, then Thanksgiving, then Christmas... all with a very pregnant wife.  I ended up leaving the beer lagering until the end of December, when I needed my fermentation chamber again.  At that point, I let the beer rise to basement temps (mid fifties or so), until bottling day on 1/19/2014.

My beer had lagered for essentially four months, save a few days in mid November (my teenage daughter decided to unplug my fermentation chamber while we were on the Disney trip).  Despite some advice to add yeast at bottling time, I went ahead and primed with table sugar to 2.7 volumes of CO2 and bottled with no other additions.  The gravity sample was delicious, though the color had missed the mark - it was more of an amber than a red in the thief, but I figured that I could console myself with good beer.  It was drier than I had expected - 1.012 - so don't let anyone tell you that WLP820 isn't a good yeast.

Three weeks went by, and every ounce of my great patience had evaporated.  I stuck a bottle in the fridge for three hours, then cracked it open.

Holy cow!  The flavor had amazing malt depth, with some bready/toasty notes to it, and overall, a really nice "German lager" taste to it.  I had a good two inches of fluffy head, with wonderful sticky lacing on the glass, and a nice cap of foam that persisted through the entire glass.  The color was an amazing dark red (so much for trusting the gravity sample color).  Unfortunately, I also picked up on a fairly bitter, almost astringent, finish.  This was a bummer, since I hadn't gotten that at all from the bottling bucket (and had, in fact, never gotten this in any beer before).

What had gone wrong?  Was the recipe bad?  Was the beer contaminated?  Has my mash pH been too high?  Maybe this was just green beer?

The internet was no help to me - the advice I got was, by and large, pretty far off the mark (the winner being some guy trying to tell me that my beer was oxidized in those three  weeks since I had bottled, due to the fact that I hadn't purged my bottles with CO2 and bottled from a keg.  Right.).

Well, when all was said and done, I either had some contaminant in that bottle, or my glass wasn't perfectly clean - the two bottles since have been absolutely delicious.

Seriously, you could do much worse for an Oktoberfest.  If I bought a six pack of this beer, I would be really pleased with my purchase.  I'm not one to brag too much on my beer, but this one is really quite excellent. 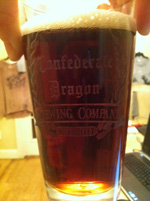 And yeah, it's very pretty, too (even if my pic *is* just a grainy iPhone shot).