Experimental Brewing with my Son - A Science Project!

This past weekend, I helped my sixteen year old son brew his very first batch of beer. Okay, the beer itself wasn't truly the focal point; to be fair, he is doing a science experiment on fermentation. Specifically, he's looking at how various yeasts from around the world perform in terms of attenuation and final pH. It's funny; he's had yeast starters going here and there, and my wife knew what his project was... but for some reason, it never occurred to her that he would actually be brewing. I pointed out to her that, after all, the yeast had to have something to ferment!

I'll confess an unsurprising fact here - I am of the hope that I can hand down brewing as a tradition to my children. I think that it would be great fun to share brewdays with them, and to swap beers with them once they are grown. My kids are all very cool people, and I hope to remain relevant in their lives long after they have moved out and started families of their own. My little boys (currently ages seven, five, and three) all enjoy helping out to various degrees, but the older kids (ages eighteen and sixteen) have not been particularly interested.

But I digress. This would be Caleb's first batch of beer to brew; sadly, he would have me overseeing the process, which regular readers of this blog know means that things would almost certainly go less than smoothly.

Early on, I had planned to have him brew a full five gallon batch, but I honestly did not have the fermentors handy for this. I then looked seriously at having him do a simple, small extract batch... but darn it, I love working with all grain (and extract is expensive!). I finally settled on a nine liter batch that we would do as a BIAB on the stovetop. We would then split this into six 1.5 liter batches (using sanitized two liter soda bottles as fermentors), then pitch the various strains of yeast. Bingo.

The grain bill was simple - six pounds of 2 row, a pound of crystal split between 40L and 80L, two ounces of flaked barley. I picked up some El Dorado hops (a variety I'd never tried) to see how they did. I suppose that you could call the overall intended result a "darker pale ale". Assuming a palty 65% efficiency, this should have yielded a beer with an OG of 1.070. I had the LHBS do a double crush, so I was hoping for better than that (with my cooler/braid/batch sparge setup, I always get 74%-76% efficiency).

Caleb is a junior at an International Baccalaureate school, where they are really big on looking at everything through a global lens. To that end, he decided to compare a commercial American yeast (WLP090) to a handful of international strains - British (WLP022), Irish (WLP004), and Belgian (WLP500). We were supposed to use a German strain, as well (WLP300), but somebody apparently forgot to save some from his roggenbier (d'oh!), so a Scottish strain (WLP028) got the call. In addition, he decided to also do a batch with a wild Alaskan yeast that an internet friend harvested from some raspberries. All told, I expected to get 1.5 liters of each variety, which should have translated to roughly four bottles of each beer. 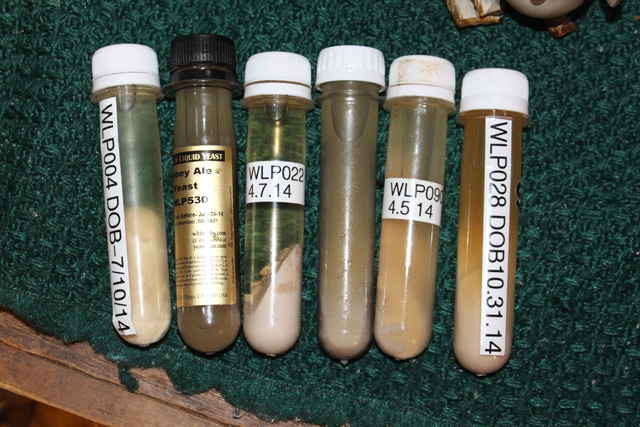 The idea is that he would measure variances in attenuation and final pH.  We considered looking at other items such as ester production, clarity, and some others... but those are more subjective, and tougher to quantify.

Like with any good high school project, Caleb waited until the last possible minute to get going on the real experiment, which resulted in me declaring that Saturday night would be the drop dead date. So, we got started... at eleven PM. Go ahead, laugh.

I walked him through warming his strike water, and had him use the dead time to go on and sanitize his fermentors, then mark them with a sharpie for fill lines. We dumped the grains into a bag, got them soaking, wrapped the pot with towels and a blanket, and waited. 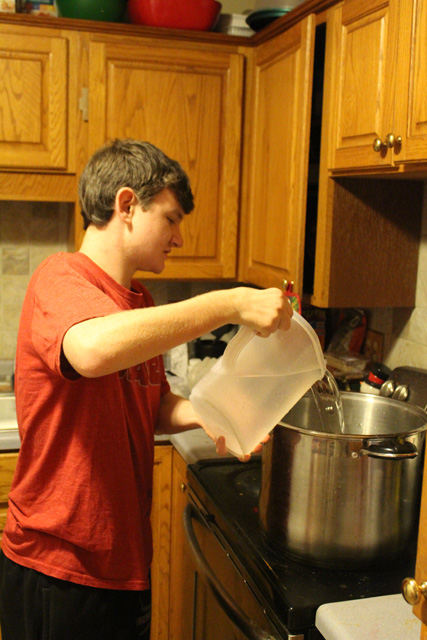 We overshot the initial mash temp a bit (153 F as opposed to the target of 150 F), but who cares? Thirty minutes in, we were still at 152 F, and I began to think that perhaps I had overstated the issues of insulating a pot. At the end of the hour, we were all the way down to around 143.5 F. Maybe he didn't wrap the pot too well? Ah, well. It's an experiment, so again... who cares?

Then, came the fun part - sparging. Suddenly, I truly remembered why I hate BIAB so very much. The hot, sticky grain bag. The fact that I have no good way to sparge doesn't help. We ended up doing what I used to do - employing a too small plastic colander on top of the pot, using barbeque grill utensils to keep the stupid thing from falling in. Of course, we spilled a little wort, and at one point, the bag fell in, splashing hot sticky goodness everywhere.

Finally, that part was thankfully done. We added a quarter ounce of El Dorado for first wort hopping, the got the boil going. The time was approximately one AM, and Caleb informed me that he was going to take a power nap.

I followed suit, setting an alarm to check the pot every so often. I decided (by eyeballing the volume) that we had overshot the initial volume too much, and so made the command decision to up the boil to nearly 90 minutes. I woke him up with ten minutes to go, we added half a whirlfloc tablet and .4 ounces of El Dorado for aroma (saving the rest for use as a tiny dry hopping).

We then chilled using the kitchen sink ice bath method, which was pretty effective - thanks to the low volume, we got down to 69 degrees F in fifteen minutes. 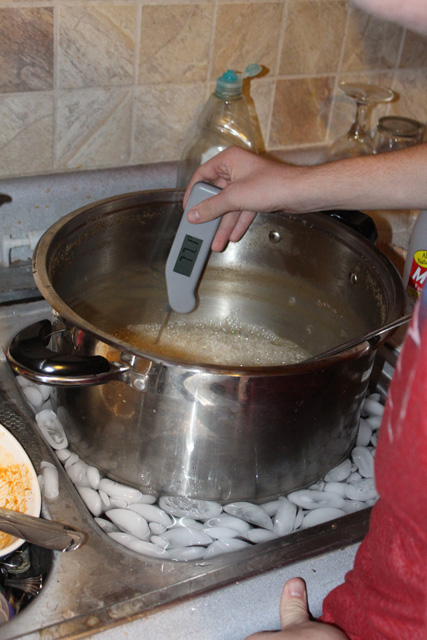 We added a quarter teaspoon of yeast nutrient to each bottle, the stated pouring the wort (which was at 1.082 in gravity, pH of 5.64 for those keeping score at home). We filled four bottles to the line, ran out on the fifth. At this point, we decided to make them slightly over one liter batches, so we redistributed the wort, uncapped the vials, and pitched the yeast. Sanitized tinfoil was used in the place of an airlock. I placed a towel on the basement floor, and moved the fermentors there. 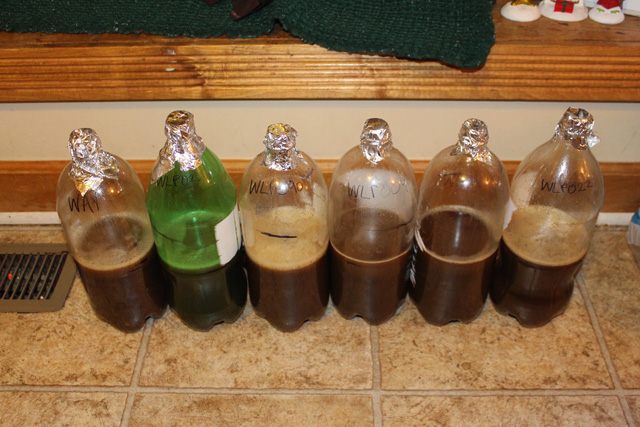 We cleaned up a bit, and headed to bed... at three-thirty AM. Welcome to my brew days, boy.

As a footnote - three of the batches fired up quickly in terms of fermentation. We hadn't made starters for everything (I had several vials of some strains), so I ended up repitching the WLP004 and WLP500. Our American strain (the WLP090) also failed to get going, and I didn't have any more of that - I repitched with a different commercial strain (EYC29, aka Conan yeast). Adapt, improvise, and overcome. We'll take final gravities and pH readings in a few days, at which point we'll dry hop for the fun of it. Three to five days later, I'll bottle these tiny (2 bottle? possibly 3?) batches, and we'll see what kind of beer we actually made.