My wife picked me up a "Brewmaster's Seasonal Sampler" from Blue Moon for Valentine's Day.  Hey, it's the thought that counts, right?  And I will admit, I really enjoyed the Agave Nectar beer they did last year.

I really like cinnamon.  I had no idea what horchata was prior to drinking this beer, however... I'm still not sure that I do.  Whatever, on to the beer.

Aroma: strong cinnamon dominates everything else.  I get a little fruitiness (orange?) that I get from most Blue Moon beers.  Very, very sweet.  No hoppiness whatsoever here.

Appearance: pours a nearly transparent medium yellow, just a bit darker than an American macro lager.  A vigorous pour gives me two fingers of white foam, but the foam recedes like a monster is chasing it; despite steadily rising bubbles through the rest of the glass, I don't even keep a ring of bubbles on the top of this beer.

Flavor: CIN. NA. MON.  There is so much cinnamon up front that I can almost imagine the powder in my mouth.  There is a little upfront bitterness which gives way to a near cloying sweetness.  The finish dries out a bit, but nowhere near enough to balance things out.  There are some fruity esters here, little distinguishable malt character, and no hop flavor.

Did I mention the cinnamon?

Mouthfeel: A little thicker than I would really prefer.  The carbonation level is nice, and there is a bit of a sting on the finish; this is one of few nice characteristics of this beer.  This beer gives a bit of a coating sensation in my mouth.

Overall: I love cinnamon, I really do... but this beer is a cloying mess.  It smells nice, but that's about it.  I honestly have no idea how it rates as high as it does at BeerAdvocate; this is a beer that I will avoid in the future, and I enjoy sweeter beers.  I cannot recommend this one to anyone.


Horchata is a(n awesome) rice drink made with vanilla and cinnamon that they serve at Mexican restaurants all over in and around Mexico. Many of breweries in SoCal have some kind of Horchata beer, usually a Stout or Cream Ale. 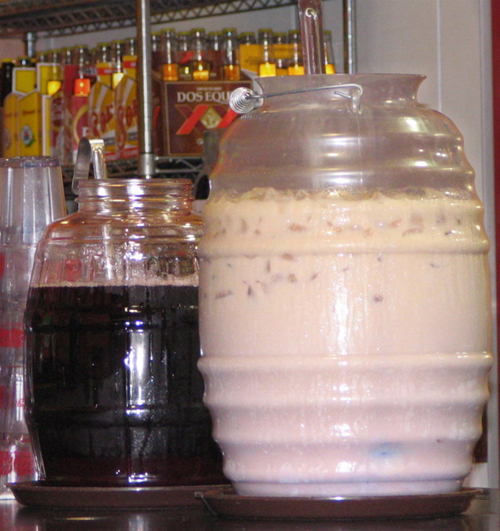 
Thanks for the education.  I still think that this is a bad beer.


I love me some horchata - and it is a really good measure of the authentic nature of mexican restaurants here in the Hill Country of Texas. Horchata beer just sounds wrong - thanks for confirming that! You took the bullet that I wouldn't step in front of!

That said - a little cinnamon in a peppery saison adds some interest - but not a big quaffable drink even then!


I took a bullet for you, for sure.


On a related note, I has a michelada for the first time when I was in USA South (i.e., the touristy part of Mexico), and it was delicious. It's like a mix of a Bloody Mary and claro (insipid lager - think Tecate.


I loooooove me some micheladas! There's a mexican place near my house that serves them so spicy that my lips are tingly after a couple sips.
A brewery here does an horchata inspired milk stout called El Lechedor. It's actually quite good. There's only a hint of cinnamon, a touch of vanilla, and there's a little bit of heat at the back end of an otherwise excellent milk stout. That's a good one to drink.


I had this one at the Bluemoon Brewpub in Denver and didn't think it was that bad. I enjoyed their peach beer a bit more though.


I enjoyed the peach beer from this mixed case.