A Dark Journey Through Hefeweizen - Part 3

After my trials with trying to nail down and balance the yeasts elements, I returned to my tomes for further resources. Getting too much banana or clove on a yeast that was entirely too picky had become a chore in itself. Even understanding how each is produced there was just too much variance with minor changes and there had to be a way to help control these better. Researching further I looked into brewing methods that are used for Hefeweizens in the past. Beyond just the Fuleric Acid rest there was a mention of Decocting and it's controversial benefits. This topic has been covered by other blogs, articles and books so I will try to keep it focused to Hefeweizen. 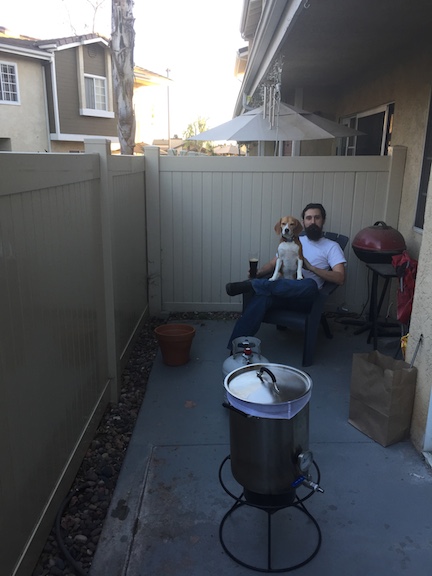 Adventurer B and his animal companion

Recipe - Time for a change up

Due to the topic, I am changing the recipe off the Dunkelweizen I usually post in order to focus on bringing out the benefits of Decoction Mashing.

BIAB is highly recommended for Decoction mashing, at least until you get used to the volumes required to hit target temperatures. This is similar to doing a Step-Infusion mash but we take out a portion to use as the heat source increasing the temperature. I will be explaining the reasoning behind the steps taken afterward but for now here is the "simplified" Hefeweizen Double Decoction Mash schedule:

It is one thing to tell someone to do something and another to convince them. Hopefully I can explain what each step does for hefeweizens so you can make your own decision. Starting from the top we work from a Fuleric Acid rest which can range between 10-30 minutes depending on the clove flavor you want. In order to stop it at the right time, the temp needs to be brought up higher. There is a Protein Rest that hits around 122 F (50 C) that helps break up the protein heavy wheat beer. This will clarify the the beer so know this isn't for your nice cloudy Hef beer. The stage though is a safe one to hold at for the first Decoction as it does not impact the flavor.

The first decoction does two things, it first starts converting the starch to sugars at first which is important for the second half. Bringing it up to a boil will help those sugars and the grain to produce maillard reactions. It is also important as the boiling will be killing off the enzymes in that portion of the mash so converting to sugars first is needed to hit target gravity.

After that it is simple enough, you bring the full mash together and get to your desired Sacc rest. While only 30 minutes before pulling out the decoction, the leftover mash will continue converting while the decoction is boiling. Which you can actually do for as long as you desire at this point, I have left it at 15 minutes in order to reduce an already long brew day. 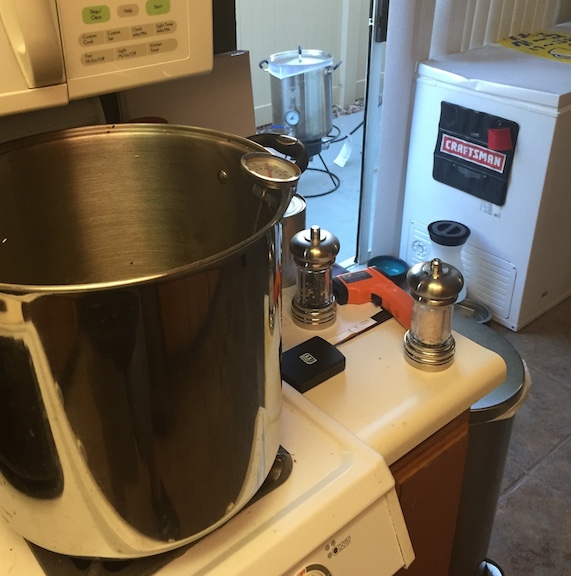 I should have used a smaller pot...

Is it worth it?

As much as I love doing these older processes...generally it isn't worth the extra time and energy for hefeweizen beers. The main benefits of doing the decoction mash schedule can mostly be replaced by proper planning of ingredients and process. For homebrewing, a BIAB setup can easily replace the efforts of the step-mash situation where you can pick and choose these steps to do and temperatures quite easily. Though it does have benefits of not thinning the mash compared to infusion mashing, proper prep for BIAB makes things quite easy.


Another element is the production of melanoidin by the Maillard reactions. You can use Munich, Melanoidin, or Aromatic Malt to give your beer this same flavor. I did not include it in this recipe as you can try to maximize the benefits of doing such a decoction mash compared to a normal brew with the same grain bill. Now that being said, there are likely more subtle flavors that can be gained from a decoction mash.  I believe that this isn't as important for a hefeweizen as the yeast flavors are the focus of the beer.  A lightly hopped lager or pale ale might actually benefit from these more subtle flavors.  Hopefully we can get more side-by-side comparisons on both Hefeweizen and Lager Decoction mashes from the experimental homebrewers out there.

Why use it at all?

The main reasons a decoction was used in the old times was a combination of factors. The first being temperature control was a challenge without a thermometer. Normal triple decoction schedules started at about 98 F (37 C) where the water feels lukewarm to the touch. Meaning that afterward they could trust the decoction additions raising the temperature reliably as boiling temperature had a hard cap. The second benefit was being able to process unmodified or low modified malts. A lot of times there were shortages of supplies and brewers just had to make due with what they have. That meant using raw wheat as a replacement for malted wheat or similar factors. Now it's quite easy to convert the sugars of our highly modified malted grains.

From a homebrewer perspective, it can be fun to play with the wart even if it does take longer overall.  Some might make believe they are some great alchemist trying to brew a potion...really though it becomes another tool in your homebrewer's toolbox.  You also never know when a contest might spring up and require you do crazy things outside normal bounds. That, and when the zombie apocalypse hits I know just how to make beer with whatever grains I can get a hold of. Thank you for reading and for now I will tease you finally with the next topic, Part 4 - Blending Yeasts!