How the Red X Malt Performed in My Irish Red

As you may recall, I have for some time been chasing that perfect ruby red color in my big Irish red ale. A couple of weeks ago, I started over completely from the ground up for recipe version number five, and put together a fresh concept that heavily featured Red X - a malt that was completely new to me.

When I dumped this into the carboy, I thought that it had red tones... but truth be told, it's really tough to tell. Likewise, the fermentation process itself really didn't give me many clues. When I brought the carboy upstairs to keg this beer, I was telling myself that the edges had a red hue I hadn't gotten before, that surely this was going to work out - though of course, the carboy contents themselves appeared a rather dark brown.

While I had hoped to get this from grain to glass in ten days, that proved to be a little bit of wishful thinking on my part; I got tied up in some other tasks and ended up kegging on the sixteenth day post brew. Then, when I fired up the auto siphon, I was rewarded with the most beautiful, light golden brown beer you'd ever want to see flowing through the tube.

Son of a nutcracker! 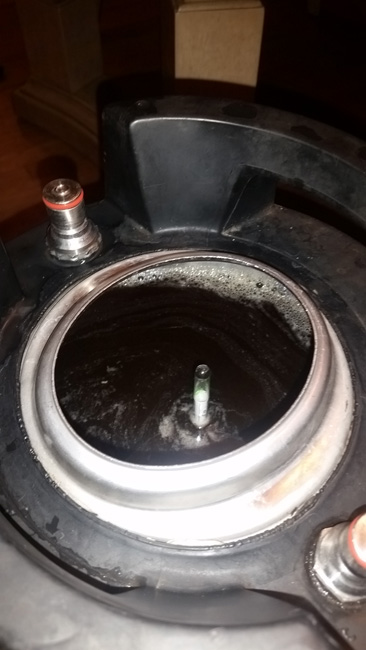 This is how a heathen takes FG. Come at me.

My final gravity was 1.014, exactly one point above my target of 1.013. Not bad, I guess, but I was miffed enough over the color that I took no pleasure in the fact. I set the regulator to forty pounds of CO2, stuck the keg into my keezer, and considered finding a hapless Nazi somewhere to punch. Back to the drawing board, AGAIN, it seemed.

But how? I mean, I could understand if the beer was maybe too dark, if it had some reddish hints, but just had the wrong color depth or balance. But for there to be not one iota of red? How was that even possible?

I vented to my email list of brewing mafia/buddies. I got some (hollow) reassurance that I needed to reserve judgment on the color of the beer until it was in the glass, that the beer is always lightest in the tube. Discussion kicked off how I hadn't used enough c malt, how roasted barley may not actually yield red color at all, and why on earth was I focusing on color, anyway? It was strongly suggested that I find a known red beer and copy off of it rather than try once again to reinvent the wheel.

None of it made me feel any better. Here I was, on the heels of two failed brews, with a major miss on this one, too. I guessed that my beer exchange buddies would just have to deal with big Irish... brown ale. Or maybe I should just go buy some local craft beer. Failing that, maybe I should just shop for a deal on Natty Lite?

The next night, I figured that even though it wouldn't be truly carbed yet, I could go on and pull a pint, just to verify what I already knew - that the beer was not, in fact, red. I vented the pressure, dialed the keg down to a serving pressure of about 15 PSI, and pulled my glass. 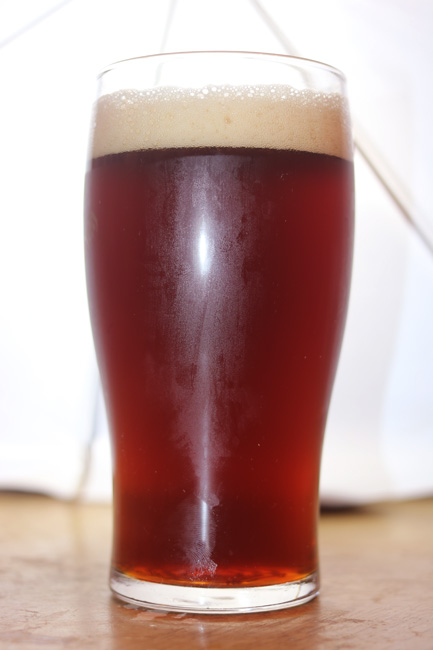 Wait... what? How could that be? Not that I was complaining, mind you, but how is it that beer that was a nice, light, honey brown in the autosiphon could possibly be that red in the glass?

I have zero clue, and have all but decided to give up on predicting redness.

So now that I have finally managed to brew a beer that actually is red... how is the beer itself? After all, it won't be much use to have a pretty beer that tastes like crap.

To be perfectly honest, I feel like I am really close to the beer that I want, though at the moment, I would say that the beer is more bitter than I was really hoping for. Looking back, that shouldn't come as a surprise; previous versions of this recipe had slightly higher gravity, yet nearly 10 fewer IBUs. In previous versions, I had a rough ratio of .44 for IBU/SG, whereas this time around, I came out at .61. I have gotten advice to give the beer a little cold conditioning time before I come to a final verdict; with only two days in the keg, things should settle out a bit as the beer drops clear.

While I'm at it, I would like more of a caramel flavor in this beer, as well. And while this is an attractive, red beer, the color isn't quite exactly where I want it. I would like a sligtly lighter, more brilliant red color if I can get it.

To the above ends, I believe that for version six, I will:
I will give it a little time, of course, before I make up my mind. However, this plan should give me more caramel flavor, less bitterness, and a redder beer.

I feel like it's safe to say that Red X turned out to be a great choice for me. My impression is that this malt plays similar to a lighter Munich malt; there is a toasty element, albeit with a little sweetness to it, in this beer. I will definitely use the same amount of Red X in version six of my Irish red, and feel like it has earned its way into future beers, as well. Too bad neither local LHBS carries it!

If red color is something you are looking for, I would heartily recommend that you consider Red X malt. I'm not yet convinced that it's quite the magic bullet that some have claimed, but it does seem to contribute some great color.

And now, please allow me to share a teaser. In the coming weeks, I plan to publish the first of an ongoing series that I'm pretty excited about. Don't worry, I'll still share tales of my screwups so as to help satisfy your need to point and laugh, but I am hoping that this new series will challenge some brewing ideas and provide some fun reading on its own. Keep an eye out for it!

I have an amber that turns out a really nice red with some good caramel notes in it. I use 10-15 percent 45L Belgian candy syrup in it. It might be something with trying.